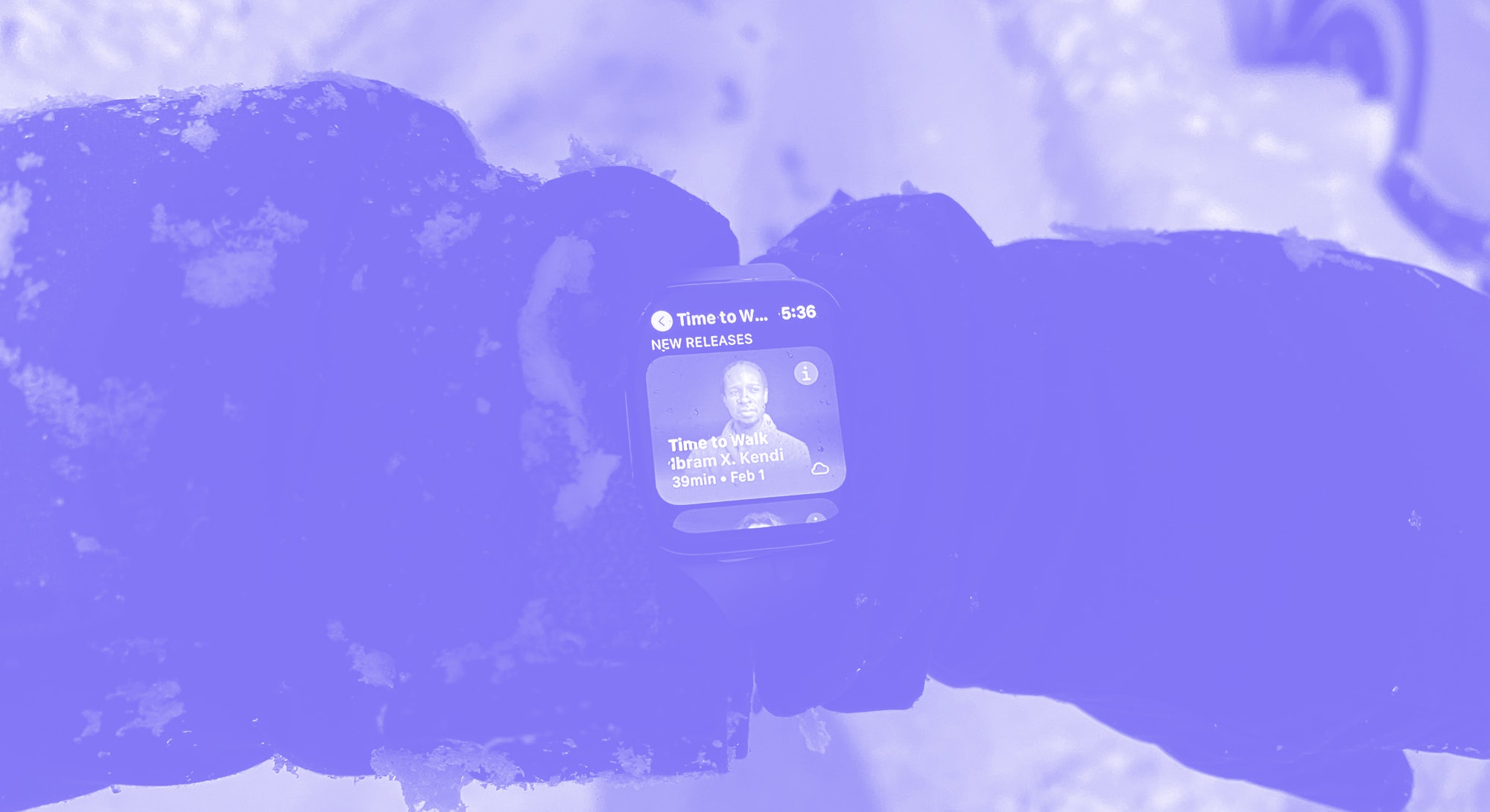 This essay started out very differently when I began writing it last week.

My original draft was for a micro review of the “Time to Walk” feature for Apple Fitness+. I went on all five released walks, including one with “How to Be Anti-Racist” author Ibram X. Kendi during last week’s snowstorm that dumped 17 inches of winter powder on New York City.

I wanted to expound on whether Apple had simply dressed up a guest-free podcast (yes, those exist) with walking, photos, and music. My answer hasn’t changed: Yes, Time to Walk episodes are basically just that.

Apple does some things really well with this Fitness+ content. There are interesting and diverse guests (Uzo Aduba, Ibram X. Kendi, and Dolly Parton offer more wisdom and inspiration than Shawn Mendes and Draymond Green). The audio (almost typed podcast!) is so well produced it sometimes felt like the speakers were walking right next to me; subtle foley embellishments like birds chipping, footsteps, and breathing really sell the walking experience. Some things I didn’t like: I constantly missed the timed photos that appeared on my Apple Watch; the walking tracking isn’t in sync with the audio (if you pause the audio, the workout continues and vice versa); I wish there were more episodes available (there’s six as of this week and Apple has only committed to content until the end of April.)

We can argue semantics over “podcast” or “not podcast” or “podcast-like” all day until we’re exhausted. What I find more interesting is that, intentional or not, new features for Apple products are increasingly geared toward teaching us to build better habits. I’m well aware of the irony of a tech company creating new features to help correct bad habits that technology undoubtedly helped create (or accelerated at the very least). But if we put aside the cynicism, I think this is an incredibly important value every technology company should consider when developing new features.

My relationship with technology is a constant parabola that fluctuates between healthy and toxic. Though I credit my mom for grooming my interest in science and technology, she always made me and my sisters aware of the addictiveness of technology, too. Long before the internet, cell phones, and social media became drug-like addictions, my mom did her best to curb bad habits from forming due to technology overuse.

She didn’t want us to play Game Boy for too long or at nose length from the tiny low-resolution display, even though she was the one who bought us the handhelds. She yelled at us whenever we sat too close to the TV — it would ruin our vision and we’d end up wearing thick glasses (oops!). She purposely didn’t sign up for home internet to force us to go to the library and read books (also limit our internet time to 30-minute sessions there). Despite the rise of personal cell phones after 9/11, my parents didn’t buy me one, predicting I’d be glued to it like every other kid.

Despite her best efforts, I still developed all of these bad habits that come with technology. (Sorry mom!) I can’t pinpoint exactly when I started to pick up on technology companies like Apple rolling out new features seemingly designed to help with improving our bad habits. But 2020 gave me more awareness.

I find myself gravitating toward technology that establishes long-lasting habits that transcend hardware or bits and bytes.

I wrote about how the Apple Watch has been my secret weapon to surviving the pandemic. At the time (last August), I spotlighted how the smartwatch was holding me accountable. The fitness tracking nudged me to stay active daily. The sleep tracking (limited as it is) shamed me into correcting my deteriorating sleep. The Apple Watch constantly reminded me to breathe and stand up. It ingrained in me the importance of washing my hands often and correctly.

Almost a year since New York City’s first lockdown, I’m proud to say that I’ve corrected almost all of those former bad habits (still working on the sleep, but that’s a real struggle as a creative). I don’t need my Apple Watch to nudge me as often anymore, though it remains a great motivator or “intelligent guardian for your health” (as Apple loves to put it).

I love technology. I love gadgets. But as I get older, I find myself gravitating toward technology that establishes long-lasting habits that transcend hardware or bits and bytes.

"It’s in Apple’s DNA that technology alone is not enough," Steve Jobs said. "It's technology married with liberal arts, married with the humanities, that yields us the results that make our heart sing."

I'd go further: The best technology is married to lifestyle in such a way you don't even realize it. The philosophy sounds simple, yet not enough companies design with this in mind. Carl Pei's new company, aptly called Nothing, seems to be driven by these values at its core. I'm excited as hell by it.

I missed this timed photo several times because of the cold. But this particular photo of Kendi when he found out he had colon cancer really hit different and stirred up feelings I rarely think about.Raymond Wong / Input
I really wish the audio was in sync with the fitness tracking. Or Apple should give us the option to sync them.

That includes all of these good habits I’ve formed with Apple Watch. Using its other health features like the ECG app and blood oxygen monitor (only on Series 6) not as a replacement for a healthcare provider, but as a way to monitor any irregularities or abnormalities. (Preventive care is the best healthcare.) Fitness+ workouts and Time to Walk all tie neatly into this habit-building. A person like me, who already took daily walks to decompress and exercise my body and mind, will get very little out of Time to Walk since walking and firing up a podcast or music is already a routine. But for a large population who may find themselves sedentary, whether because of work or school or whatever, Time to Walk may be enough of a small push to start them down the road of self-improvement.

“The hardest part is starting” is something we all see on inspo posts plastered all over Instagram. Good habits are not formed overnight. It’s generally established that it takes three weeks to build a habit and about 90 days of continuously doing it to make it a permanent change. Time to Walk, like the other Apple features, is a good way to start building a habit of walking, which is scientifically linked to boosting creativity.

I’m giving the Apple Watch team a lot of credit here, but I think it’s equally important that Apple’s other product teams keep good habit-building top of mind when developing new features, whether that’s hardware or software. “Is this going to create a positive habit or a negative/addictive one?” This is a whole discussion on ethical design and psychological impact, which I won’t get into depth today. But it’s nonetheless very important as users and customers. We should all consider this question when we buy a device. “Is this actually good for us long-term?”

Is this going to create a positive habit or a negative/addictive one?

Features like Screen Time on iPhone and iPad and Digital Wellbeing on Android devices are a start for controlling device and app addiction. Displays and software that reduce blue light or adjust the color temperature to curb late-night doomscrolling are also helpful. Even putting a Do Not Disturb button on the keyboard of the new M1 MacBooks can be considered deliberate design for your health (do you really need all those notifications pinging you all day?).

But more needs to be done.

I look at the Apple Watch and Fitness+ and see an entire widget designed around forming better habits. What can we borrow and adapt from a device and service like that for our phones, laptops, game consoles, etc? I’m not a designer so I don’t have the answers. As a user, though, who’s growing with technology every day, I do think applying this principle to products and services is more important than ever. The companies that can successfully integrate positive habit-building into their products and do so seamlessly so that it feels invisible will be the ones that thrive. And the ones that don’t? Their products will be forgotten in the long run.