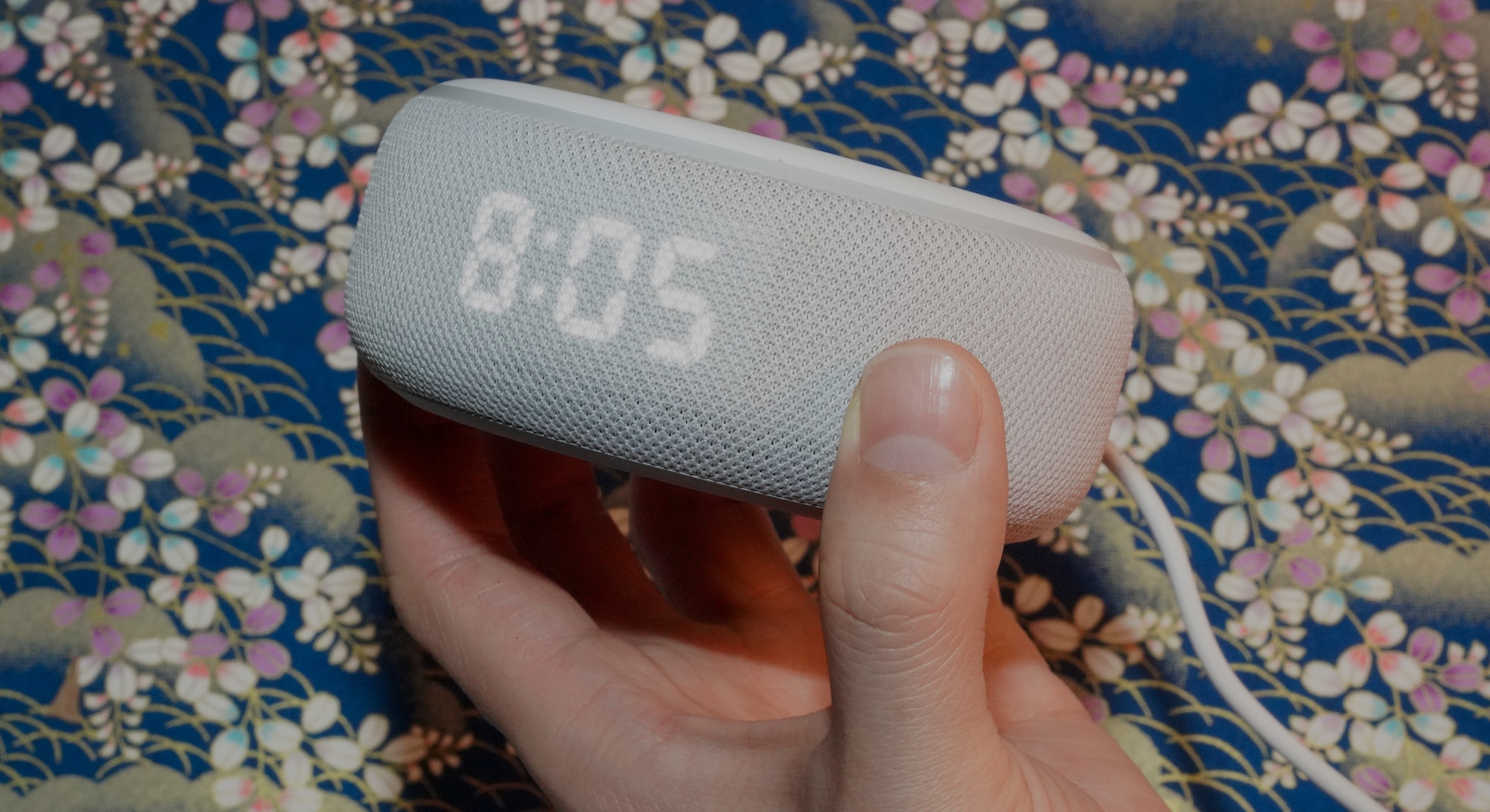 These days, there’s a disturbingly long list of Amazon Echo devices — many of which probably don’t need to exist — designed specifically to bring Alexa into your life. Do we really need Alexa to help microwave us a potato? Do we need the digital assistant in a pair of glasses? No, we don’t.

But the Echo Dot with Clock! Now, here’s an Echo that’s cheap and valuable because Amazon kept it simple. Sure, Amazon just added a digital clock to the front of the Echo Dot. But I have to say: it’s absolutely awesome. I haven’t had to shout at Alexa to tell me the time in the morning since I got it and I think — I think — I’m less grouchy because of this.

Same Echo Dot package — So the Echo Dot with Clock (which I’m abbreviating to EDC) looks just like the regular clock-less Echo Dot. Same exact design, same size, same sound quality. You get the same volume, Alexa, and mute buttons on the top. If it ain’t broke...

The EDC looks good and doesn’t take much space on a shelf or counter or bedside table. It would have been nice if it came in a color other than light gray — the pink the regular Echo Dot comes in is dope — but that’s not a deal-breaker.

What time is it? — I haven’t owned a wall or bedside clock (any kind) in my apartment since I got an Echo in early 2015. Getting the time has been a voice-controlled affair since then. Asking Alexa to tell me the time is nice when it understands me. But when it doesn’t hear me or my voice is shot from a night of drinking, getting the time becomes a chore. Repeatedly asking for the time is easily solved by just seeing it.

That’s why it’s so stupidly awesome the EDC shows the time. At a glance, the time is right there. The nearest competitor to the EDC — Google’s Nest Mini — now looks weirdly naked by comparison. I realize Amazon basically just made a smart alarm clock, but unlike, say, Lenovo’s Smart Clock, the EDC isn’t a screen. That’s important to me because I don’t want more potentially harmful blue light blasted into my already deteriorating eyeballs after futzing around with my iPhone all day.

The digital clock doesn’t blind your eyes when the lights are off, either. A light sensor automatically adjusts the brightness so it’s bright and visible during daytime and dimmer (but still readable) in the dark. At night, the fabric exterior masks the clock just enough so that the LEDs aren’t harsh at all; there’s barely a faint glow.

After a month of using the EDC, I can definitively say the clock has made me a more tolerable human. I’m less frustrated daily because Alexa failed to understand me. I’m sure my blood pressure doesn’t spike up as often (my doctor told says it’s normal and I trust her).

Look, the EDC’s clock isn’t useful if you’re putting it in a place where you’ll never see the time. But as a bedside clock or in the kitchen — its simplicity is an incredible asset.

Other visual information — The time is what you’ll see most of the time. However, if you ask Alexa for the weather, it’ll show the temperature on the face. Set a timer and it shows a countdown; I hated asking Alexa how much time was left on a timer when I cooked. Set an alarm and you’ll see a dot next to the clock that lets you know it’s actually set (no need to double-check with Alexa anymore). A motion sensor to let me silence alarms and timers with a wave of my would have been icing on top (maybe for the next version, Jeff?).

The Echo for everyone — At $59.99, the Echo Dot with Clock is $10 more than the regular Echo Dot. For me, it’s not worth wasting breath asking Alexa for the time all day so I’ll gladly pay $10 extra for the time. It’s still an inexpensive way to get your smart home started.

The sound on the EDC isn’t improved over the regular Echo Dot and that’s fine. It’s an Echo Dot — it sounds good enough — so it’s not going to blow your ears off like an Echo Studio or HomePod. I’m just glad it doesn’t sound like mono trash the way my second-gen Echo Dot does.

The EDC makes for a great gift for anyone who doesn’t have (and isn’t totally against) having an always-listening Alexa in their home. At the time of this writing, the EDC is on sale for $35. I bought three. Nobody tell my family what they’re getting for Christmas. I really hope they appreciate being able to see the time as much as I do.