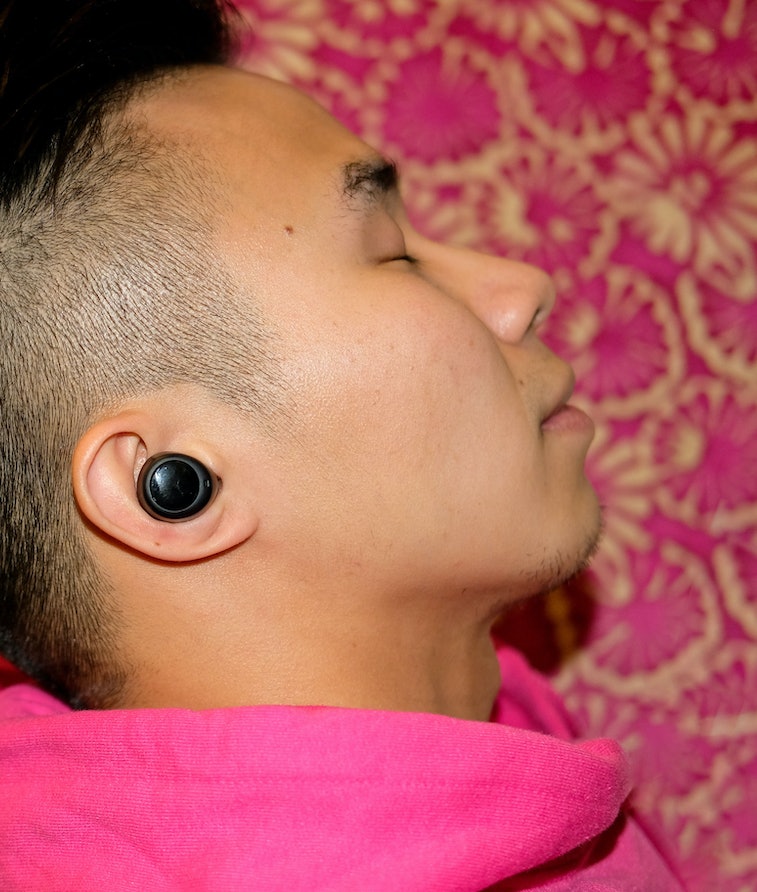 Like many wireless earbuds, the Echo Buds sound better than AirPods. They also come with a larger case that holds more charges. And Echo Buds are cheaper: $129 vs. $159 for AirPods ($199 with a wireless charging case).

None of these things will matter, though, because the Echo Buds aren’t AirPods. They’re designed by Amazon and it shows. They’re cheap, generic, and very plastic; they might as well be called “AmazonBasics Wireless Earbuds with Alexa.”

They hurt my ears — AirPods fit my small ears well. I’m blessed they don’t fall out and the stems don’t stick out sideways. In comparison, Echo Buds bulge out of my ears like old-fashioned hearing aids. The in-ear tips, when twisted inwards to sit deeper inside of your ear canals, help seal in sound, but they also hurt my ears with continuous listening.

I’ve tested other in-ear-style wireless earbuds like Sony’s WF-1000XM3 and Samsung’s Galaxy Buds and neither were uncomfortable for hours of use. The buds come with three regular tips (the large ones are pre-installed) and three wingtip bands (these wrap over the whole buds) — but I couldn’t find a pair that were super comfy. Everyone’s ears are different so you may not have the same fit issues.

Also, I felt the warmth of the metal charging contacts in my ears after removing them from the case. They never overheated, but the warmth did make me a little worried.

They sound great — Cheap as they look, Echo Buds sound better than AirPods with clearer mids and deeper bass. The “Power Hour” playlist of dance and tracks on Spotify is way more thumpin’ through Echo Buds.

The Echo Buds sound good partially because of their Bose active noise-reduction (ANR) technology, which reduces outside noise. This ANR isn’t the same as Bose’s active noise-cancellation (ANC) technology, which it uses in its own wireless headphones. Bose told me its ANC is superior to ANR because it actually cancels noise as opposed to reducing it; for example, ANC is better at drowning out places with very loud noise, like inside airplanes and trains.

Even with ANR, the Echo Buds block out more external sound than AirPods. But they are nowhere near as good as Sony’s WF-1000XM3, which have ANC. Of course, Sony’s earbuds also cost $100 more than Echo Buds.

With Echo Buds I could still hear my feet pounding the pavement during runs and the slamming of washing machine doors at my laundromat even with the volume cranked to 100%.

I like the “passthrough” feature, which lets you hear ambient sound while still listening to your music. There are five levels of passthrough, adjustable within the Alexa app, and double-tapping either earbud’s touchpad switches between it and ANR modes. It’s not the best-sounding ambient mode I’ve heard on wireless headphones, but they do the job. Dolby’s Dimension and the new Beats Solo Pro have the best ambient modes that don’t sound very monotone and static-y, but they’re also headphones and not earbuds.

Long battery life, but what’s with the Micro USB? — The Echo Buds get up to 5 hours on a single charge and an additional 15 hours from the charging case. The AirPods’ smaller case holds 19 hours and the Sony WF-1000XM3 case holds 18 hours (with noise cancellation on) and 24 hours (with noise cancellation off). Samsung’s Galaxy Buds last up to 6 hours on a single charge, but the case only adds up to 7 hours of battery life. On the plus side, a 15-minute fast charge gets you 2 hours of listening time with the buds.

Simply put: the Echo Buds have great battery life. My key complaints are its large charging case — it’s almost twice the size of an AirPods case — and that it charges with Micro USB. It’s 2019, and Amazon still refuses to switch to USB-C! Sure, you get a Micro USB cable in the box, but I left it at work and was screwed when I couldn’t find one at home.

Alexa on the go — Having Alexa in the Echo Buds is handy. It was way more convenient to say “Alexa, I’m home” to activate my routine that turns on my smart lights and plays jazz music than it was to open the Alexa app on my phone or wait until I got home to shout at my Echo. Still, I never really needed Alexa outside my home. In fact, it was awkward for everyone around me to hear me ordering Alexa to do things like skip to the next song.

Weird touch controls — Most headphones have simple touchpad controls: tap for play/pause, long-press to activate a digital assistant, swipe up and down to change the volume, and swipe forward or backward to go to the next and previous track.

Each Echo Bud has a touchpad, but they only support two controls: double-tap and press-and-hold. By default, a double-tap on either bud switches between ANR and passthrough modes, and a press-and-hold turns on your device’s voice assistant (Siri for iOS and the Google Assistant for Android).

Duplicate controls made no sense, so I left one touchpad with the default settings and set the other to playback controls. It really sucks there’s not single-tap control, though.

I get that Amazon wants me to use Alexa voice commands instead of fiddling with buttons, but asking the assistant to change the volume is more work than a tap.

After using Echo Buds for a week, I still think they’re ugly. Amazon’s just not great at design. It was true for the Kindle, Echo, and Echo Show — version 1.0 of all of these products were all sinfully hideous — but they all got better-looking with every new iteration. I’m hopeful Echo Buds 2 will look prettier.

I’m an AirPods guy and I refuse to buy wireless earbuds that come with a charging case larger than the AirPods one, even if it means saving $50. But that’s because I’m a snob when it comes to design and compactness. If you don’t care about that, the Echo Buds are great wireless earbuds for the price. Just remember: you’ll never look cool with them in your ears.