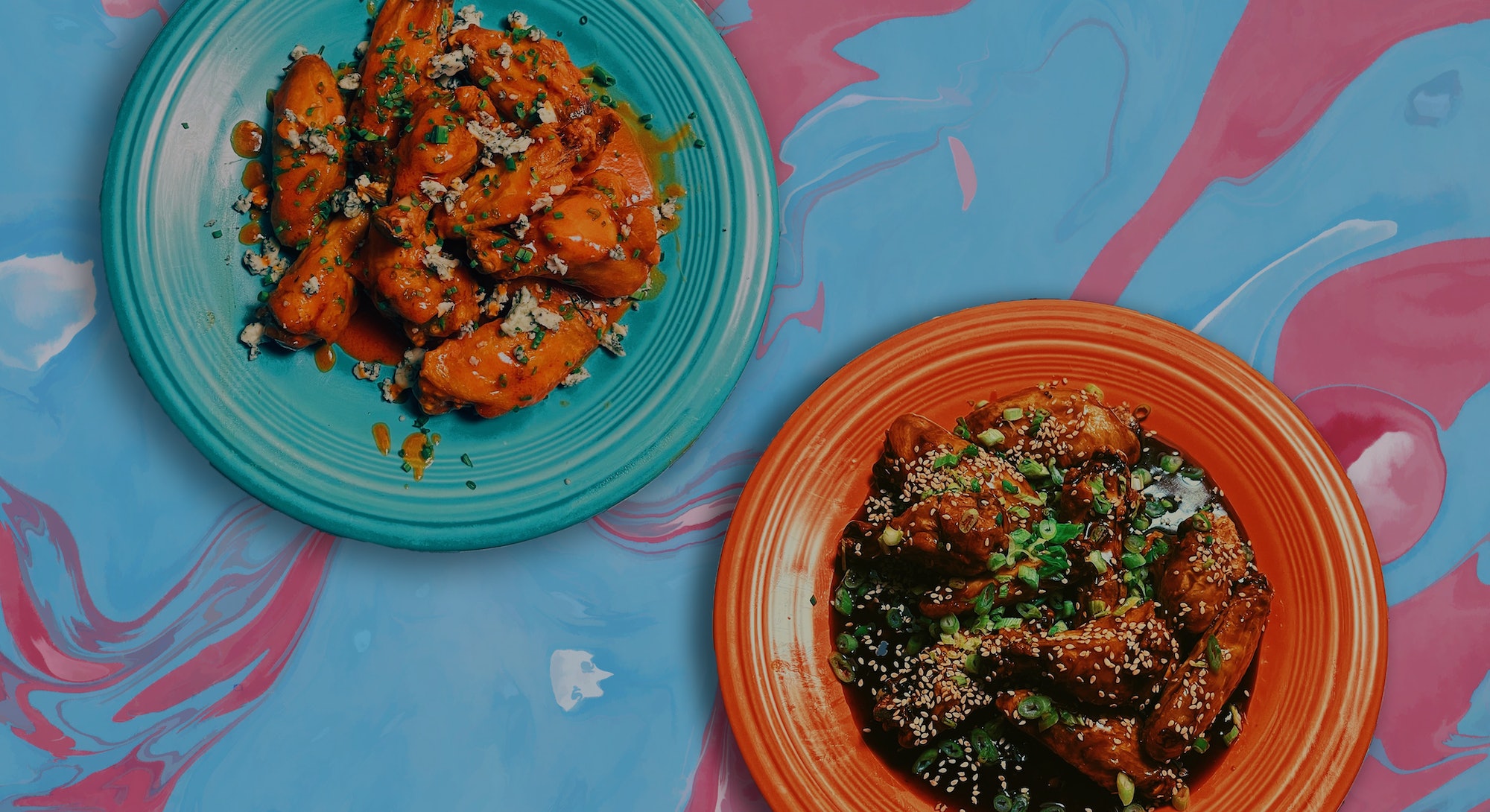 I should know, having grown up in the Canada of New York myself. If chicken wings are the region’s religion, the Anchor Bar (the birthplace of the Buffalo wing) is its most vaunted house of worship, even if you (correctly) prefer Duff’s.

As an acolyte of the chicken wing, I’m predisposed to not only sing its praises, but to call out blasphemy when I see them defiled by methods like baking, breading, or god forbid, steaming (shame on you, Alton Brown). Chicken wing law, if it were to exist on paper, dictates there is only one, true, preparation: the deep fry.

Yet, despite years of delicious fried wing tradition, alternative preparations continue to crop up, most recently in the form of everyone’s darling, new kitchen essential, the air fryer — a device that inspires in me the sort of skepticism most might reserve for an “unknown caller” ID or white powder in an unmarked envelope.

As skeptical as I am of the air fryer, and kitchen gadgets in general, I’m equally as lazy, and if the air fryer stans claims are true, kitchen technology (yuck), might save me time, cleanup, and probably a massive coronary. So, with Super Bowl LVI around the corner, and all of the delicious wings that it brings, my curse of traditionalism can be your gift.

Let’s decide once and for all — air fry vs. deep fry: Which wing wins?

Preparation — The goal for chicken wings is always maximum crispiness without any dryness. To achieve that end, I always prep wings in advance by salting them and popping them into the fridge on top of a cutting board that’s wrapped in wax paper.

The salt, through osmosis (cool), draws water out of the chicken and flavors your wings, while the fridge, with all of its cool, dry, fan-driven air serves to dry the skin out even more. Both of those things add up to a dry wing skin that’s primed for crispness in any preparation. Moisture, after all, is always the enemy of Maillard — the sacred reaction between food and heat source that creates browning.

Deep fry — Let’s rewind: I don’t even own a deep fryer. That’s not because they’re too expensive, or too big, or because I’m afraid of going all Ark of the Covenant in a vat of hot oil, it’s because I have a secret weapon — a big-ass, eff off, cast iron wok that absolutely slays fried foods.

While you don’t need a wok to deep fry (a heavy-bottomed cast iron pot, i.e. Dutch Oven, will do) its unique shape allows for optimum frying power if you’re using a gas range. Since wok’s are curved, they allow flames (and heat, duh) to creep up along the sides, meaning your oil gets ripping hot and and your heat is more evenly distributed. The concave shape also allows you to use oil more economically compared to a wide-bottomed pot or oven too. You’ll be grateful for that bit when it comes time to clean up, trust me.

I’ve deep-fried lots of wings sans fryer in my day, and the wok has a leg up on any pot or pan I’ve ever used.

Air Fry — There are no shortage of air frying options nowadays, but Philips’ XL Digital Air Fryer consistently ranks among the top tier. This three-quart air fryer goes for $250 and has granular temperature controls in addition to “fat removal technology” — Philips claims its fryer creates a “tornado” of hot air that helps whisk away excess fats from your food.

All of the innards are non-stick, and the fryer doesn’t even need to be preheated, meaning you get to just pop your food in, set the temperature and the time and let the machine do the rest.

With wings cut, salted and primed for crispness via a few hours in the fridge, it’s time to get cooking. I divide the wings equally, with 12 going in the wok to deep fry and 12 going in the air fryer. As per usual, I pour a disturbingly large quantity of oil into the wok and start to preheat, cranking my biggest burner high enough so that the flame tongues the sides of the wok.

Since I’m no air fryer expert, I reference a highly rated recipe for wings on the Food Network that suggests cooking the wings for 12 minutes at 360 degrees, turning them over, and re-inserting for another 12 minutes only to eventually finish them off at 390 degrees for 6 minutes.

I oblige and pop the wings into the non-stick basket and set the time and temperature (increments on the Philips fryer only move in increments of 25, so I set the fryer to 375 degrees). The basket, it’s worth noting, barely fits all 12 wings — and this is apparently the XL version.

With the wok oil up to temperature, I (with no caution exercised) start to submerge the second batch of wings in the wok. Satisfying fry noises ensued. As both batches do their thing, it’s a waiting (and flipping) game.

There are a few important metrics to judging chicken wing superiority that encompass not just how the final product tastes, but the texture, appearance, and just how difficult it was to bring the wing to its desired form. First and foremost, let’s talk about texture.

Deep fry — Crispiness is probably the biggest reason why I prefer to deep fry wings over baking or broiling. I’ve tried both, but neither gets to that satisfying level or crunch like a boatload of dangerously hot oil.

So, how did the deep fry perform its duties? Listen to the video below:

Air fry — Before I even start to talk about how Philips’ lauded air fryer performs in its task of crisping up wings, I want to reiterate how deeply skeptical I am of trendy kitchen gadgets, which oftentimes fall short in their goal of mitigating cooking “inconveniences” that can actually just be improved with a little practice, technique, and some sharp knives.

With that out of the way, however, I’d like to officially say I was blown away with just how well Philips’ air fryer performs in its crispy wing assignment. Listen to the crunch from a sauceless air fried wing below:

The point goes to... DEEP FRY.

While I was impressed by how well Philip’s air fryer performs, the wings fried in my cast iron wok still take the crispy crown. Even with the point going to deep frying in this case, the contest is still a close one and the fact that you can actually brown a chicken wing using only hot air is, on its face, pretty damn cool.

If we’re comparing cooking methods, factoring in how difficult (or not difficult) the process makes your life is critical. Confit is delicious, for example, but when it comes to Super Bowl snacks, I think spinach artichoke dip will do just fine.

Deep fryer — In case you had any question, let me be very clear: frying things in a vat of oil is incredibly messy. There’s the splatter; the smell; the inherent danger of having that much volcanic oil in your home; and the ultimate letdown — the cleanup aftermath.

As amazing as your fried wings may be (and boy are they amazing) returning to your stove to find enough biohazard to fill a small bathtub is not fun. What exactly does one do with that much-used canola? Definitely not drain-worthy. The garbage? Probably too leak-prone. Maybe you go full-blown environmental catastrophe and dump it into the East River. In any case, the only options are bad ones.

Timing wise, the deep fry did cook 12 wings at a brisk 15 minutes, though there’s the preheating factor, which took at least 5 minutes.

Air fryer — Not to go full anti-climax on you, but out-conveniencing a deep fry isn’t actually hard work. The level to which Philips’ digital air fryer exceeds in this department, however, is worth expounding on.

As I mentioned previously, Philips’ fryer doesn’t preheat, so cooking the wings is as easy as dropping them in the basket, punching in a temperature and time, and waiting. All of the components inside are non-stick so any leftover grease from the chicken is easily wiped away.

Since the air fryer doesn’t use oil, there isn’t much smell to contend with other than the scent of a chicken cooking. It goes without saying that the danger levels are obviously non-existent compared to burning yourself with a quart of flaming canola.

It takes 30 minutes to get wings to maximum crispiness, which may sound like a downside, but when you consider how inactive the cooking process is, 30 minutes feels more like 10.

This is an easy category for air frying given the inherent mess of dealing with all that hot, delicious, oil. I knew using Philips’ machine was going to be easy, but am still surprised at how easy it really is.

Deep fry — People deep fry things for a reason, the most obvious reason for which is that it makes stuff incredibly delicious. Fatty foods, however bad for you, taste amazing, and it comes as no surprise that chicken wings aren’t any different. Even sauceless, my wok-fried wings taste amazing, especially since I bothered to salt them in advance.

Air fry — Air-fried wings aren’t just easier to make and lower in fat, they’re actually extremely well-browned. Browned foods — protein in particular — just taste better, and although fried wings bring an umami x-factor given their journey through a sea of bubbling fat, when sauces are involved (as it almost always is) it’s hard to tell the difference.

This one is too close to call in regulation, folks. We’re going to have to go to overtime to decide a winner.

But here’s the bottom line: Deep-fried wings are better. They taste better; they’re crispier; and they hold up when slathered in wet, sticky, sauces, and with all those superiorities in mind, for the purposes of this scientific test, I have to declare the winner... the air fryer. Sorry.

Despite all the superiorities of deep-fried wings, there are some realities to deal with when it comes to making them at home. Number one: you’re making wings at home. The frying; the smell; the mess; all of those factors are tremendous hassles, and on a belly full of fried chicken and hot sauce, I need things to be easy.

Secondly, there’s the sauce. Alone, the deep-fried wing tastes better, but after everything is gussied up in over-powering sauces (in the case of my test, Buffalo sauce or teriyaki) it’s nearly impossible to discern the difference between a deep-fried or air-fried wing — even if you’re really trying, and believe me, I was.

I have to declare the winner... the air fryer.

It shakes me to the core to be conveying these thoughts, but I stand by my words. Do I think deep-fried wings deserve to win? Of course. But in sports, just like in wings, there is no deserve, just a time, and a place, and a set of rules punctuated by a few bad calls. Ultimately fans and players are left with either pain or triumph, or in this case — a belly full of hot sauce, a plate full of chicken bones, and the realization that traditions were actually made to be broken.