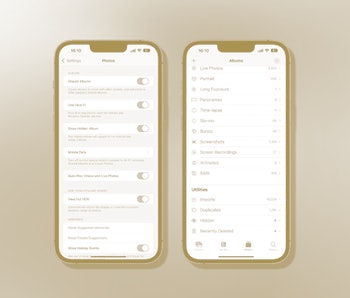 It’s taken a lot longer than it should have, but Apple finally lets you safely lock away the most private photos on your iPhone, ensuring they won’t be seen without Face ID/Touch ID or passcode authentication first.

Previously, putting a photo into the hidden album in the Photos app only meant that it couldn’t be seen in main photo library. Anyone who tapped on the hidden album, however, could still easily access all the images. Thanks to an update in iOS 16, common sense has prevailed, and now you can easily make sure nobody goes snooping without your permission.

How to lock your hidden photos album

This setting will put a lock on the hidden and recently deleted albums on your iPhone so that you have to use Face ID/Touch ID to unlock them. Don’t worry, you can also enter your iPhone’s passcode if you need to.

You’ll need to authenticate using Face ID/Touch ID the next time you tap the hidden or recently deleted albums, found in the Utilities section in the Photos app, and a prompt to enter your passcode appears if biometric authentication fails. You can quickly check that the lock is enabled by looking for the padlock icon beside each album. With this feature enabled, someone who has access to your unlocked iPhone won’t be able to see all of your photos anymore, as long as you put them into that hidden album, of course.