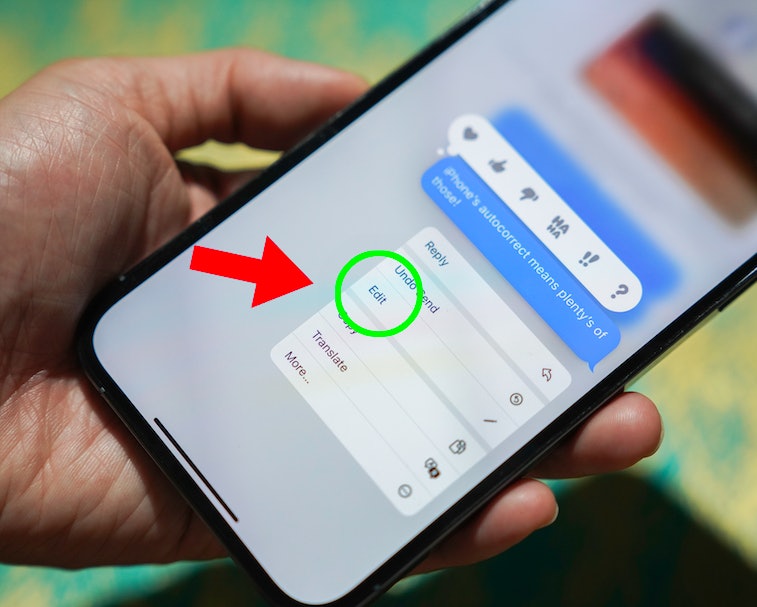 Making a mistake when sending an iMessage used to mean sucking it up and trying again. That's changing with iOS 16 and iPadOS 16, which lets you edit sent iMessages. Finally.

Editing an iMessage is easy to do and works on all devices with iOS 16 (or later) or iPadOS 16 (or later) installed. Your recipient also needs to meet the same requirements, too.

Editing and unsending: What’s the difference?

The ability to edit an iMessage isn’t the only change Apple made to the Messages app with iOS 16 and iPadOS 16. A new Undo Send feature lets you unsend iMessages and remove any unwanted iMessage from your device(s) as well as the recipient's device(s) — assuming everyone's devices are on at least iOS 16 or iPadOS 16.

Editing an iMessage doesn’t remove its previous versions and is best used for fixing minor typos rather than removing an embarrassing message. You can unsend an iMessage if you want to make it disappear entirely from everyone's chat.

How to edit an iMessage on iPhone and iPad

The edit will appear on your devices as well as the recipient's. An "Edited" label will appear below the iMessage, where it would normally say "Read" or "Delivered."

Tapping on the "Edited" label below the message will reveal a history of all previous versions of that iMessage. No edits can be made without them appearing in that log so consider unsending the message if it is embarrassing or sensitive.

Note that editing only works with iMessages, even with iOS 16 and iPadOS 16 (or later) installed. Messages sent via SMS (green bubbles) cannot be edited. You need to re-send those messages if you notice a typo, unfortunately. That means you can’t edit messages sent to Android owners, too.