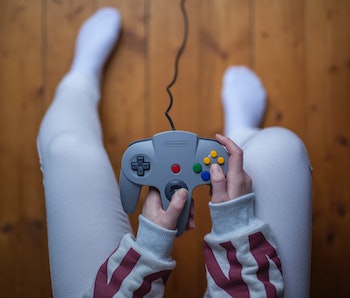 I will begin this guide by asking you to check your internet law degree at the door. Yes, emulation software is entirely legal. Yes, "backing up" games is entirely legal and downloading other people's backups of games you already own might be legal (but nobody has tested it in court). No, downloading other people’s copies of games you don't own is definitely not legal. Are we all clear on that? Great.

If you are a scared baby and cannot handle some gray market hi-jinx, I will direct you towards your local smile.amazon.com where you can purchase a variety of Classic or Mini consoles and game compilations. If you’d like to live your life within the confines of the PlayStation Store, Nintendo Switch Online, or the Google Play or Apple App Store, I cannot stop you. Go forth, rich person, and pay for Sonic the Hedgehog 2 for the twelfth time in your life. You are morally superior to us all and can close this tab.

Okay, now that the narcs are gone, let’s play some damn video games.

To start off, let’s assume you don’t know anything about emulation. An emulator is a piece of software that mimics the console hardware of game systems past, allowing other hardware to run games that were specifically built for another machine. The files of these games are pulled off of retail release copies and are mostly called ROMs or ISOs depending on the console’s software medium. TL;DR: The emulator is a copy of the console and the ROM is a copy of the game.

I cannot legally tell you where to find ROMs or ISOs for games you do not own. Perhaps you should Google "[Game Title] + ROM + download" and see what you find. Perhaps you should ask our friends over at Archive.org for some help. Perhaps there are subreddits dedicated to this. Legally, I cannot say.

Now once you have a copy of a game, there are different places one can run an emulator, such as an Android device, PC, or Mac. At the moment Apple does not allow emulation on its iOS platform but if you’re interested I shall direct you to the geniuses behind AltStore.io.

When you’ve decided which platform you prefer, each OS will have a variety of apps one can run for each console—but the universal solution for nearly every legacy console on nearly every piece of hardware is an open-source app called RetroArch. RetroArch is very powerful and versatile, but confusing enough that we shall set it aside for today. (I can hear the hardcore emulation enthusiasts groaning in the back but, I’m sorry, if you can work RetroArch, you do not need this guide. Please go argue with the aforementioned narcs.)

Below I will break down the piece of dedicated software I recommend that you use for each major retro console, depending on whether you use a Mac, PC, or Android device. Because each app has a specific interface and its own approach to controllers, graphics, and audio settings, we suggest you use YouTube to find a tutorial on each app.

Without further ado, here are the emulators you will need to play the vast majority of retro games:

Nintendo games are by far the easiest to emulate, thanks to their popularity and straightforward design. If you’d like to emulate the NES, you can do that in your browser, but for the best experience, we suggest traveling to the Mushroom Kingdom via higan, a multi-system emulator for Windows, OpenEmu, a gorgeous multi-system emulator for Mac, and NES.emu for Android.

To step things up to the 16-bit SNES, you can use the same Mac and PC apps, but we’d recommend Snes9x EX+ for Android. For N64, there’s Project64 for Windows, trusty old OpenEmu for Mac, and Mupen64Plus FZ on Android.

By the time you get to the GameCube or Wii, your main option is Dolphin for all platforms. It’s very good! For the entire Game Boy and Game Boy Advance libraries, we’d use mGBA on Windows, OpenEmu again on the Mac, and GBA.emu on Android. For Wii U, use Cemu.

DS emulation has come a long way recently and you can use DeSmuME on Windows, our old pal OpenEmu on Mac, and DraStic DS on Android. If you’re really ambitious, you can get into 3DS emulation with Citra for Windows and Mac and its unofficial port for Android. Phew!

Sega does what Nintendon’t! Sega systems are a bit harder to emulate than Nintendo systems, largely thanks to their architecture. When systems are harder to emulate, you’re going to see scattered differences between what plays on the emulator and what you’d get from an official console experience. For Sega systems, these are most often sound problems. However, if you’d like to emulate the Sega Master System or Game Gear you can once again use higan for Windows, OpenEmu for Mac, and MD.emu or Nostalgia.GG for Android.

For the giant library of Sega Genesis/Mega Drive/CD/32x (never change, Sega) games, we’d use Kega Fusion on the Mac and PC and MD.emu on Android. Sega Saturn is a bit harder to emulate than other consoles, both due to a lack of public interest in the library and its overly complex architecture. However, if you need some Panzer Dragoon, we’d use Yabause on Windows and Mac and Yaba Sanshiro on Android.

Finally, to play Dreamcast’s phenomenal library of classics, download the excellent Redream which is compatible with all three platforms. SEGA!

Sony’s PlayStation consoles each have enormous libraries, but after the PSX it gets a bit harder to run each of them. To play Crash Team Racing on PSX, use ePSXe for Windows and Android or OpenEmu for Mac.

For PS2, you can use PCSX2 on Windows with mixed results, or DamonPS2 on Android for very, very bad results. Mac users are left out in the cold here. Similarly, the PS3 can only be emulated on Windows with RPCS3. You won’t be running PS3 games on your MacBook. (Sorry, babe, but why did you think that would be possible?) Finally, for all your PSP needs, there is PPSSPP available for all platforms.

Neo Geo and Neo Geo Pocket Color games like the King of Fighters series can be played using Mednafen on Windows, OpenEmu on Mac (you’ll need to enable "experimental" cores in the settings menu and then download the MAME core), or either NEO.emu or NGP.emu on Android.

Though it goes by many names, the TurboGrafx-16/PC Engine/CoreGrafx platform is home to some spectacular titles (like Ys I & II) you might have missed out on in your youth. To play these games, use Mednafen on your PC, OpenEmu once again on the Mac, and PCE.emu on Android.

Save your quarters and get your old school arcade fix using Mednafen on Windows, OpenEmu on Mac (you’ll need to enable "experimental" cores in the settings menu and then download the MAME core), or the appropriately titled Mame4droid on Android.

And not to end on a sour note but, for a variety of reasons, there are no good options for emulating Xbox or Xbox 360 games. The good news is that many Xbox exclusives are also available for Windows because... ya know… Microsoft. All hail Master Chief (at least for the first two games.)

And with that, we leave you to go get your feet wet with emulation. There are so many games scattered throughout the history of this glorious industry that you will likely never run out of retro titles to explore. But, once more for legal reasons: Don't pirate games. 😉