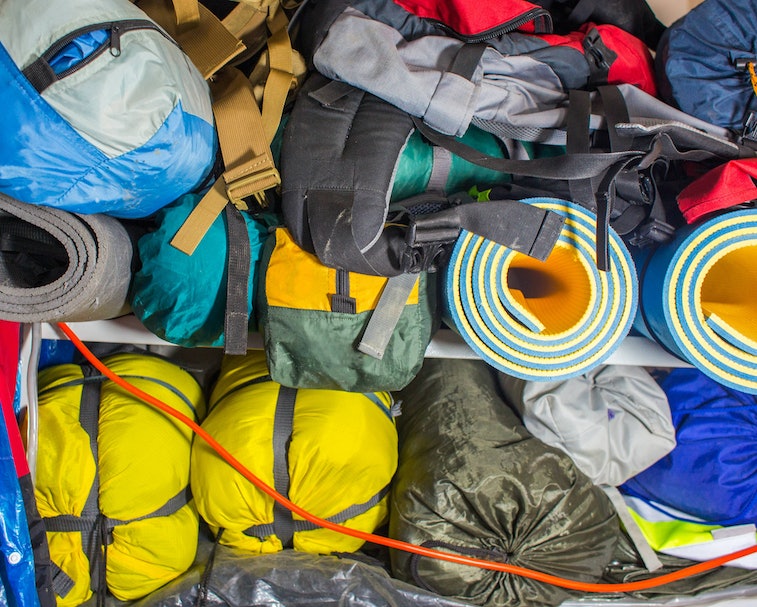 Odds are if you’re reading Input, you’re someone who appreciates the new and notable. Outdoor gear is like tech — brands are constantly trying to up their game, improve, and release better versions of their products. And when gear is as critical as it is on hikes, backpacking trips, climbs, and ski days, it’s hard to resist the pull to stay on top of it.

But what happens to all that gear that gets left in the dust? There’s no reason to keep filling your gear closet, endlessly pushing old gear deeper into its depths. Or worse: throwing it out. That’s expensive, not to mention bad for the planet. There are plenty of less obsessive people who can make good use of that gently loved product on their own adventures.

These are the best places to recycle and breathe new life into your used outdoor gear, not to mention, make a little bit of money back to buy that flashy new tent.

But first: How to sell your gear

Rolling in from a hike, deciding you don’t want your boots anymore, and just tossing them in a box isn’t a great way to make sure you’re getting their full value. Start by cleaning them off and repairing any glaring issues. Do they need new laces? You’ll probably be better off buying some and slapping them on there before you try to sell the boots, rather than leaving it up to your customer. Clean the mud off, wash out any stains, brush the dirt out of a tent, and make them look nice. Have zippers repaired, patch any holes, and generally try to get the product ready so that your customer can take it on an adventure the day they receive it.

Next, do a little research, and be realistic about it. That jacket you paid $500 for a year ago? If you even wore it once, it’s lost a lot of its value. Even less if it’s a little beat up. There’s no real rules for this kind of thing, but poke around the internet to see what similar products are earning, and don’t let sentimentality get in the way. We know it’s easy to find a real attachment to some of this gear, but that means nothing to a customer.

Also, think about timing. Giant down puffies aren’t going to sell super well mid-summer. And trail runners might not do as well in November. Don’t be afraid to keep things in the gear closet a little bit longer to get the seasonality right.

Once you have everything ready to go, snap some good pictures, and choose the best way to offload your gear.

A litany of different Facebook groups make it easy to get your gear in front of lots of eyes, but selling comes with some work.

Facebook has a slew of different outdoor groups, many of which make it easy to sell gear. Find one that's either specific to your local area or to the activity you’re selling gear for (Backpacking Gear Flea Market has more than 115,000 members as of publishing) and list your gear on your own. Obviously, the listing, selling, and shipping is up to you, but it’s the easiest way to get your stuff in front of a lot of people, and take 100 percent of the selling price for yourself. Just be careful: Not all groups allow selling gear, so make sure you read the rules before posting.

Whether you’re looking for DIY posting or full-service consignment, Geartrade is a hub for used outdoor gear.

Geartrade has been around since 1999 as a fairly basic place to list and sell your outdoor gear, which means it’s become a pretty well known site to find stuff, and it has a fairly loyal and robust following of shoppers. If you’re listing and shipping the gear yourself, Geartrade only takes a small cut. But recently the website began offering a consignment model, allowing you to box up and send (with a free shipping label) your gear to them to list. If you don’t want to deal with the hassle, the rates are reasonable (you get between 40 and 70 percent of the selling price) and the system is super easy to use.

Easy to use and with a large selection of products, Requipper is a simple outdoor gear marketplace.

Requipper borrows from Geartrade’s earliest model, allowing sellers to list their gear and handle the shipping themselves, taking only a seven percent fee. The website takes care of the money for you, and hosts your listing among a large collection of other products. If you happen to live in the Bay Area, the website’s Garage Sale does allow you to use a consignment structure. They’ll pick the gear up and list it for you, cutting you in for anywhere between three and 85 percent of the selling price at the end.

Skip the wait and get REI gift cards for your gear.

REI’s used gear Garage Sales have been a staple of the outdoor world for years, but recently the retail behemoth opened up a way to buy used gear online, along with a way to trade it in. Similar to Geartrade, REI sends along a shipping label and then reimburses you with a gift card (as good as cash, if you have a gear habit). If you live close to a select number of stores, you can even turn your gear in in-person. Rates are a little bit less than you might find elsewhere, but you don’t need to wait for them to sell to get your payout. You do need to be a Co-op member to take part, as well.

The company accepts used Patagonia clothing that functions perfectly and is in good condition. When you trade-in, you'll earn credit toward purchases in Patagonia retail stores, on WornWear.com and Patagonia.com

Few companies have shown as much real dedication to the planet as Patagonia: A few years ago, the brand ran an ad in the New York Times telling customers “Don’t buy this jacket” to fight consumerism. Their Worn Wear program allows you to send in (in-store or through a prepaid shipping label) functional Patagonia gear and receive credit to use in stores or online. The brand then cleans it up and resells it for you. Payouts are relatively meager — between $10 and $100 — but the system is simple and you can feel good about who you’re supporting.

The original online used shop still has a place in the modern outdoor gear world.

Old faithful. eBay has been the spot to hawk your junk for nearly as long as the internet has been around, and you better believe you can successfully sell your old outdoor gear there. eBay, and in particular sites like Poshmark, are uniquely capable of selling older outdoor clothing. Seller fees are minimal but you’ll have to do all the work.

If you have one close by, nothing beats a mom and pop consignment shop.

If you’re lucky enough to live in a reasonably-sized outdoorsy town, take a look around for a true brick-and-mortar outdoor consignment shop. Spots like Boulder Sports Recycler in Boulder, CO make it about as easy as it gets: Just dump your (clean) gear with them, they’ll catalog it, and when it sells they’ll cut you in. Rates are often slightly better than you might get from online consignors, but these shops only sell in-person, so living in a place with a lot of people looking for outdoor gear helps.