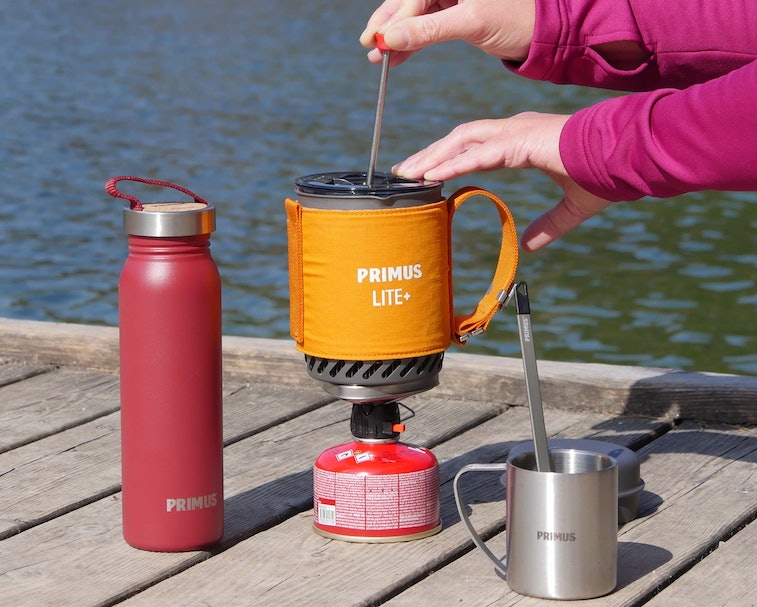 It’s a truth universally acknowledged that food tastes better outdoors, and after a day of physical exertion, some dry crackers aren’t going to cut it. A stove is essential for campers and we’ll never spend a night under canvas again without provisions for a steaming mug of coffee in the morning.

As well as giving you energy, hot food and drinks are one of the most effective ways to warm up after a chilly day in the great outdoors. Camp stoves come in all shapes, sizes, and fuel types so here’s what you need to know before you buy, and how to differentiate between canister and liquid fuel stoves.

From cooking in 100 km/hour winds and multi-week thru-hikes where weight was of the essence, to summer beach campouts, I’ve seen how different stoves perform in all kinds of environments. These are my picks for the best camping stoves.

Note: Alcohol-based stoves and solid fuel stoves also exist but these aren’t very common so I'm not touching on those today. (Maybe in the future!)

A common choice for backpackers, small canister stoves are simple to use. Generally, they screw on or clip onto isobutane/propane self-sealing fuel canisters. They’re often the most lightweight stoves that you can find, but they don’t stand up so well to wind and extreme temperatures. With ultralight and/or budget canister stoves, you may also find that the arms are too small or weak to hold larger pans. Empty canisters are also difficult to dispose of as they’re considered hazardous waste. They can be recycled, but only in specific locations (contact your local propane supplier to find out where).

Integrated canister systems are fast becoming the preferred choice of many thru-hikers. This is when the stove is integrated with a specially designed cooking pot. It makes them much more efficient and wind-resistant. They’re also extremely compact, lightweight, and easy to use. The downside? They’re definitely suited to one person, and whilst they boil water quickly and efficiently, they’re best for simple meals (dehydrated food or instant noodles, for example). Don’t expect to be cooking up a 10-course backcountry tasting menu on one of these! Disposing of the canisters works the same way as with small canister stoves.

For both canister stoves and integrated canister systems, check that your stove is compatible with the gas canisters available in your destination (since you won’t be able to take gas on a plane). In the USA and UK screw-top cylinders are common, but in France, for example, many gas cylinders are clip-on.

Significantly heavier than the first two, liquid fuel stoves are often used for expedition-style trips or large-scale catering on group trips. The stove attaches to a refillable fuel bottle which is generally filled with white gas but can work with diesel, unleaded fuel, and more, so it’s easy to get fuel virtually anywhere in the world. These stoves perform well in high altitudes and at very low temperatures too, so if you’re planning an intrepid, remote expedition, this type’s for you.

They smell divine and are more environmentally friendly but they’re temperamental, namely because they rely on the availability of natural resources (usually dry wood, although some use pellets). If there’s none around, or if it rains, your instant noodles are staying crunchy. We’d recommend these for short trips where you’re familiar with the terrain, or can bring your own wood with you. They’re great for wilderness hut expeditions or campouts close to home.

The ability to easily suspend your stove from a hanger on uneven terrain is a fantastic design feature.

No stone has been left unturned. There’s a cork-lined insulated pot sleeve to keep your food warm, the pot lid doubles up as a cup, and they’ve included pot support pegs so you don’t just need to use the 1–2 person pan included with the system. I particularly love the hanging system, so that you can still cook easily if there’s no flat ground. The Laminar Flow Burner Technology keeps the stove stable by giving a low center of gravity, and you can control the temperature with a foldable control valve.

Feature-packed: The Biolite charges your phone, lights your campsite, and cooks your meal all at once.

If weight isn’t your primary consideration, it’s difficult to do better than the BioLite CampStove 2+, which is jam-packed with features. The stove itself burns sticks, wood scraps, and pellets, but it also generates electricity through heat so you can charge up your electronics as you cook. A smart LED dashboard gives information on the strength of the fire, and the power output, and there’s a flexlight included to light your surroundings. A power bank, lantern, and stove all in one!

You’ll be enjoying hot coffee in just two minutes with the Jetboil, which had the fastest boil time we’ve experienced.

You’ll be hard pushed to find a stove that boils water faster than a Jetboil, which is why it’s a very popular choice for solo hikers. The MiniMo reaches boiling point in just over two minutes and weighs just 14.6 ounces. This integrated canister system is designed for solo use. Sideways burner storage saves space in your pack, the bottom cover doubles up as both a measuring cup and a bowl, and there’s a low spoon angle so that you can eat straight from the pan.

The PocketRocket is an affordable, lightweight option for thru-hikers and fastpackers.

The MSR PocketRocket proves that you don’t need to break the bank to get a fantastic stove, and it weighs just 2.9 ounces. It’s more wind-resistant than many small canister stoves as it comes equipped with a broad burner with a wind-blocking lip. It boils water in 3.3 minutes and comes with piezo (push start) ignition. A great option for lightweight backpacking.

This pocket-sized stove punches well above its weight in boil time and wind-resistance.

This small canister stove was the very lightest analyzed, at 1.9 ounces (that’s less than a deck of cards). It’s so tiny and compact that the biggest risk is that you’ll lose it! The foldable arms have a built-in windscreen for wind protection, it’s easy to use, and the boil time is just three minutes. For ultra-lightweight fans, fast packers, and minimalists, you can’t do much better.

Savotta’s flat pack wood stoves are novel and practical for shorter adventures. Currently only available in the EU.

Aesthetics-wise, this stove wins for us. Choose from a happy or a grumpy face and when the fire’s burning, flames illuminate the smile or grimace. This is a twig stove, so best for use when fuel is readily available. It can be taken apart to pack flat, so is very compact (and hardly heavy at 8 ounces), and the cooking support in two sections provides ample, stable support for a small pan. It’s a good size for 1–2 people.

The Optimus Nova is designed for use in harsh environments and has won awards for reliability. Ships from Europe.

The Optimus Nova is a liquid fuel stove, great for use at high altitudes and in extreme conditions. It works with diesel, unleaded fuel, white gas, jet fuel, and petroleum for worldwide use. The single jet has an integrated Magic cleaning needle to clean the jet quickly and easily, and the stability of the stove for larger pots is impressive. For reliability on a long expedition, we’d highly recommend it.