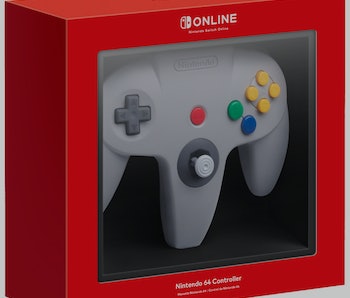 Another day, another sold-out electronic device. This time it’s the Nintendo 64 controller for the Switch, which was released to coincide with the company’s new online service that came out at the end of October. The confusingly-titled Nintendo Switch Online + Expansion Pack gives users the ability to access a range of games from the 64 and Sega Genesis days but is a pretty bad deal, all things considered. One silver lining that has emerged from the service though: The release of a Nintendo 64 controller meant to better recreate the experience of playing some of the early classics, like Ocarina of Time.

With all of that being said, however, the controller in question went on sale yesterday (normally a $49.99 value) only to sell out before the end of the day. According to Nintendo’s official listing of the product, the accessory won’t become available again until 2022, with no month specified.

Checking out Nintendo U.K.’s site will, unfortunately, provide the same result — the controller is also sold out there, with additional models not supposed to be in stock until 2022.

So what’s up with the shortage? Is the N64 controller yet another victim of supply chain issues that have affected everything from the consistent rollout of high-powered GPUs to Supreme drops? It’s difficult to say exactly, but one would imagine that this kind of product would be getting restocked given that the demand is there.

A play to nostalgia— While mining nostalgia isn’t exactly a new marketing technique, it seemed to be at the forefront of Nintendo’s Switch Online Expansion Pack. High prices, a lacking game library, and poor emulation quality have made the service add-on more trouble than it's worth.

When it comes to the N64 controller, however, which is by and large nostalgia baiting too, the play to the past actually works. The product serves a specific function in that it lets users play enhanced 64 games the way they were meant to be played.

For people interested in waiting for a restock, you will have to be a Nintendo Switch Online member in order to purchase one, as they are only available to existing subscribers.