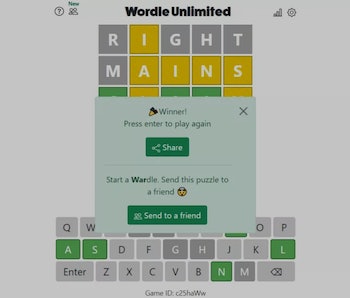 Since Wordle inserted itself into the cultural conversation, there have been countless spinoffs — from battle royale to numerical-based versions, there really isn’t a shortage of variety. But what about the people who can’t get enough of this game and need not just one opportunity to correctly guess the word of the day, but multiple if not infinite attempts? Well, lucky for you, someone has created Wordle Unlimited which, as you can guess from the title, provides users with a never-ending chance to secure that hallowed green row.

After playing through a game, you can simply reset it for a new word. It also allows for more complex play: users can adjust the number of letters in the word for longer or shorter challenges.

Network good — You probably know at least one person who has mentioned Wordle before, dabbles here and there, or actively plays the game each day. There’s a camaraderie that exists — in that sense, it’s not that different from other mobile games that managed to catch fire, like 2048.

Wordle Unlimited attempts to right that ship by putting the onus on users to rope others in. There is an option to create your own word, as well as the ability to generate a random word. Links to either of these scenarios can then be copied and pasted anywhere. People can also join a Facebook group for the game by navigating to the help section of the interface.

Now that Wordle is owned by the New York Times, changes are going to be made to the landscape spawned by the success of the game. More of the spinoffs will undoubtedly be taken down. Hell, the original has already been altered, with profanity being phased out and ad tracking being phased in.