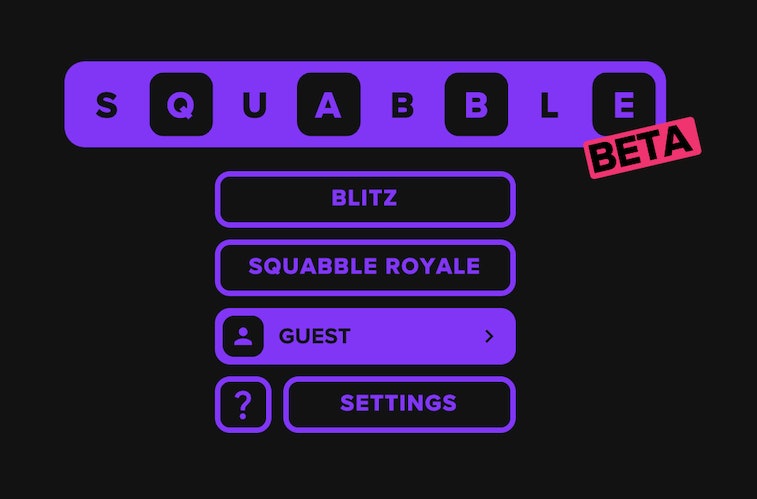 You’re probably aware of Wordle, the viral word game that gives users six chances to guess a five-letter word. Despite having been released in October, the mobile game didn’t take off until mid-January (on November 1 the game had 90 users) and since then has been acquired by the New York Times for a price in the “low-seven figures.” Naturally there have been imitators — a number of shameless rip-offs have been emerging on Apple’s App Store along with a more ethical counterpart.

‘Squabble,’ a new addition to the Worlde-esque ecosystem, falls more in line with the latter, adding an extra layer of — you guessed it — battle royale to the template.

As outlined in a Medium post from Clive Thompson, Squabble functions like “a mashup of Fortnite with Wordle,” by adding a battle royal, multiplayer component. Right now you can play Squabble for free and choose between two types of game modes: “Blitz” and the aforementioned “Squabble Royale.” Both of them are multiplayer, although Blitz is a more stripped down version with only 2-5 players, while Squabble Royale boasts the possibility of 6-99 players.

So where’s the difference?— The major difference from Wordle, aside from the multiplayer aspect, is that players experience a time crisis of sorts while trying to guess the correct word. Players begin with 100 HP and lose one health point every second. Damage is healed for every correct guess, while incorrect guesses deal damage to the player.

In Thompson’s post he (somewhat unfortunately) compared the rise of Wordle to COVID-19 in that both have spread like wildfire and inspired, um... offshoots. Strange to compare a benign word game to an ongoing health crisis, but he’s right about the viral part at the very least.

Aside from Squabble, Wordle has inspired plenty of other clones, including Sweardle (four-letter curse words), Lewdle (sexually-suggestive words), and Absurdle (the word changes for every guess). Expect many more to follow.