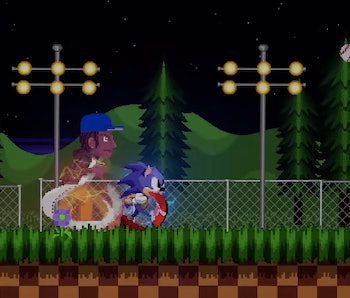 We're almost one year away from Sonic the Hedgehog's 30th anniversary and things are heating up. The upcoming Sonic film is finally set to make its big-screen debut on Valentine's Day after some necessary delays to fix the (shudder) main character's design — and, we just got a look at the new music video for its theme song.

Called, "Speed Me Up," the song features rapper-slash-weed enthusiast-slash-esports gamer, Wiz Khalifa. And, before you ask, no one's getting high in this one. The video also features artist Lil Yatchy, Ty Dolla Sign, and TikTok superstar, Sueco The Child (who's actually an adult).

Together, the four are transformed into pixelated, animated game characters who run and spin along Sonic just as fast as he did in the 1991 original.

In a mad dash for golden rings and fighting off enemies all the while, Wiz Khalifa takes us through some catchy lyrics and scenes we expect to see in the film. The classic Sega Genesis console also makes a cameo, bringing us back to simpler times of old hacks like blowing into cartridges.

New theme song, who dis? — We can't help but notice how different this song is from the original theme song, featuring Coolio's funky but cryptic mega-hit, "Gangster's Paradise," which had a lot of folks confused. Instead, we've got something a bit more fitting and video game-like, which is no diss to the rap classic.