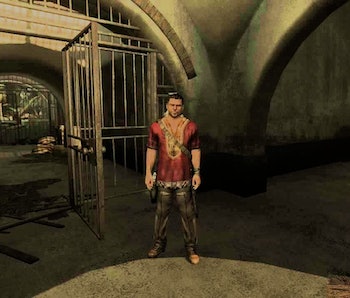 It's no secret that Far Cry 2 is one of the strangest video game sequels of all time, taking the first game's tropical setting and bizarre aliens and following it up with a much more serious story set in a war-torn African region. But if you're one of the many fans who has theorized about the true identity of Far Cry 2's villain The Jackal, consider yourself proven correct.

One and the same — In a recent interview with IGN, Far Cry 2's creative director Clint Hocking confirmed that The Jackal and Far Cry 1 protagonist Jack Carver are actually the same person. Fans noticed similarities between the two characters back at the game's original release, especially after data miners noticed the Jackal's in-game files have "jackcarver" in the name.

As Hocking states in the interview, the connection between the two characters is more thematic and ideological than fully-developed in canon. Since Jack Carver was a "shifty, smuggler, gun-runner kind of crook," the team decided that he would be involved in Far Cry 2's conflict ten years down the road. "Maybe it was drug-induced, maybe it's post-traumatic stress disorder, or maybe it's real," Hocking says. "But the idea is, a decade later, he has leveled up his smuggling game, and he's gotten embroiled in this conflict."

Dead connections — Previous Far Cry games have included references to other games in the series, with Far Cry 4 even reusing characters from Far Cry 3. However, it appears that Ubisoft has mostly jettisoned any sort of shared-universe talk, especially since (*spoiler alert*) the recently-released Far Cry 6 has a secret scene after the credits with a familiar face from Far Cry 3.

That character (*no, seriously, spoiler alert*) is none other than Vaas, the beloved antagonist of Far Cry 3. (Of course, Ubisoft would rather have you forget the part where Far Cry 3 kills him off way too early and the entire game's story loses steam but better late than never.) It's unclear how exactly this will fit into Far Cry 6's sequel plans, but many of the series' villains have already been confirmed in some sort of DLC which apparently takes place in their own minds... or something. Look, if you want to understand it, you probably need to play Far Cry 6 for yourself, because not even the lure of Vaas is enough to make us slog through the latest entry.