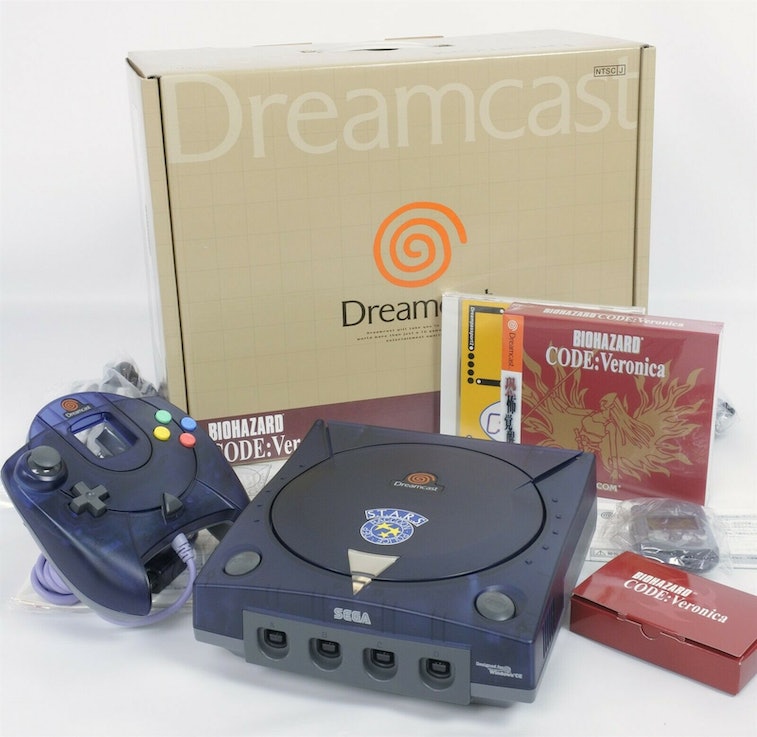 Do you like Resident Evil? Do you really, really like Resident Evil, even the bad ones (and let's be honest, there are a few). Well, if your heart beats the red-and-white rainbow stripes of the Umbrella logo, perhaps you'd be interested in picking up a mint condition Code: Veronica-themed Sega Dreamcast. Unfortunately for you, it'll cost you quite a chunk of lucre - $18,000 USD, to be exact.

According to the very helpful ConsoleVariations.com — which is also potentially hazardous to your wallet, if you're so-inclined — this particular Dreamcast is known as the S.T.A.R.S. edition, and it was exclusively released in Japan. It's emblazoned with the logo of the zombie-slaying fighting force, and it also includes a matching controller, a gray VMU (that's a memory card, for all you Zoomers out there), and Resident Evil: Code Veronica itself. This particular Ebay listing claims that the console is in mint condition, and their "buy it now" offer is $18,000.

What're ya buyin'? — Now, to be fair, this console is pretty rare, as only 200 were manufactured. That said, this still seems like a ridiculous wad of cash to pay for an old video game console, even for one as exclusive as this. That amount of money will buy you a pretty nice used car, or even a medium-end luxury watch.

Then again, as we've covered before, the price of "collectible" video game memorabilia has skyrocketed in the past few years, thanks in part to auction houses and collectors allegedly working together to boost the value of widely available games, like Super Mario 64. If you absolutely have to have a Resident Evil-themed Dreamcast, perhaps this other Code Veronica-themed variation will tide you over. It's "only" $2,500! However, there are 1,800 of this one out in the wild, so you might have to brag just a little bit quieter to your friends about that.

Code green — Take it from us: while you can certainly dump a bundle into video game collectibles if you so desire, you should only go into it for the love of the game, so to speak. Prices might be rising right now, but these sorts of bubbles rise and fall away all the time, so maybe give yourself a little bit of time before you trade your kid's college fund for a piece of 20-year-old plastic.