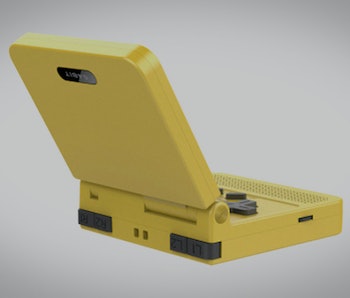 The Game Boy Advance SP is maybe Nintendo's greatest handheld form factor of all time. (Don't come for me, DS people!) Which is why it's so surprising that it hasn't been knocked off more. That ends now. The Powkiddy V90 is here, it's cute, and it's $40 freaking dollars.

The Powkiddy "brand" (such as it is) of Chinese retro consoles isn't exactly known for having the most — ahem — polished materials or internals. But what they lack in fanciness they often more than make up for in cute design and affordability. In these regards, the V90 doesn't break with tradition.

Polygons — The clamshell unit features four face buttons, four shoulder buttons, and what looks to be a perfectly fine D-pad, which is more than enough buttons to play anything you'd actually want to emulate on one of these things. There's also a 3-inch, 320x240 pixel IPS display, a microSD card slot for storing your "backup" ROMs, USB-C charging for its 1,020 mAh battery, and — wait for it — a headphone jack. Even the real deal GBA SP didn't have one of those!

Sprites — Honestly, for $40 this unit kind of seems like a steal. Judging by its internals (AllWinner F1C100S ARM9) it should comfortably emulate portable and home consoles up to the Game Boy Advance and even the original PlayStation — though there will be 3D PSX games that chug on here, so plan to play things closer to Castlevania: Symphony of the Night than Tekken 3.