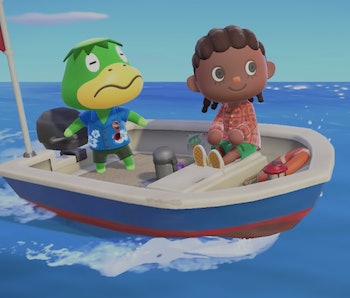 Animal Crossing: New Horizons gets a massive boost in the form of its free 2.0 update today, as well as the $25 DLC, Happy Home Paradise. And while not all of the new additions are game-changers, there's quite a bit here that'll make your private island feel brand new all over again.

Here are the best improvements coming to the game as of November 5:

Spill the beans — Animal Crossing veterans were saddened by the absence of certain characters from New Horizons and series barista, Brewster, was on the top of that list. Thankfully, 2.0 will introduce the shy brewmaster back to the island, as well as the beautician Harriet, shoe seller Kicks, and the fortune-teller Katrina. Also, longtime series mayor Tortimer will apparently make an appearance, despite the fact that everyone thought he died. Whoops!

The update will also bring the strange noise-making gizmos known as Gyroids back into the mix. Gyroids were a huge part of the first few Animal Crossing games, so the fact that they weren't in New Horizons was surprising. You'll be able to grow them on your island — which is apparently how they work, who knew? — and then place them in your house for amusement.

Island days — Besides these big additions, New Horizons 2.0 brings a number of small quality-of-life updates that will nevertheless have a significant effect on your everyday players. You'll now be able to build 10 bridges and inclines on your island instead of 8, and you can adjust the activity times on your island with town ordinances, so you're no longer beholden to the in-game clock. You'll also be able to access your home storage from anywhere on the island with the new locker item, which is a feature that I am definitely looking forward to.

The update also adds a number of surprising additions to the game, such as the ability to cook food, the concept of hanging furniture on ceilings and walls, more furniture customization options, and even an improved Nook Phone. However, there's still no word on the ability to craft more than one item at once or a way to skip the crafting cutscene entirely, which were my two biggest issues with the game.

Interior design — If you've got the cash to spare — or you've already shelled out $50 for the annual Nintendo Switch Online Expansion Pack, which includes it — Happy Home Paradise itself is probably the biggest feature here. Based on the mobile spinoff Happy Home Designer, the DLC transports you to a whole new island, where you can decorate other villagers' houses without having to worry about all those crafting materials. Villagers challenge you to decorate their dream homes based on specific themes and items that they'd like to see included.

It's a good way to experience the joy of putting together your perfect Animal Crossing house without having to scrape together thousands of Bells. While it's not for everyone, this minigame will definitely appeal to a certain kind of Animal Crossing player, and for that reason, it's a big addition.

Breath of fresh air — While not every Animal Crossing fan was taken with New Horizons — or perhaps I'm just speaking from my own personal experience — it's clear that 2.0 adds a lot to the game, especially in terms of features that fans expect from earlier entries in the series, like City Folk. If you haven't visited your island recently, it's definitely more than enough to warrant a return trip. Just make sure to clean up the weeds sooner than later.