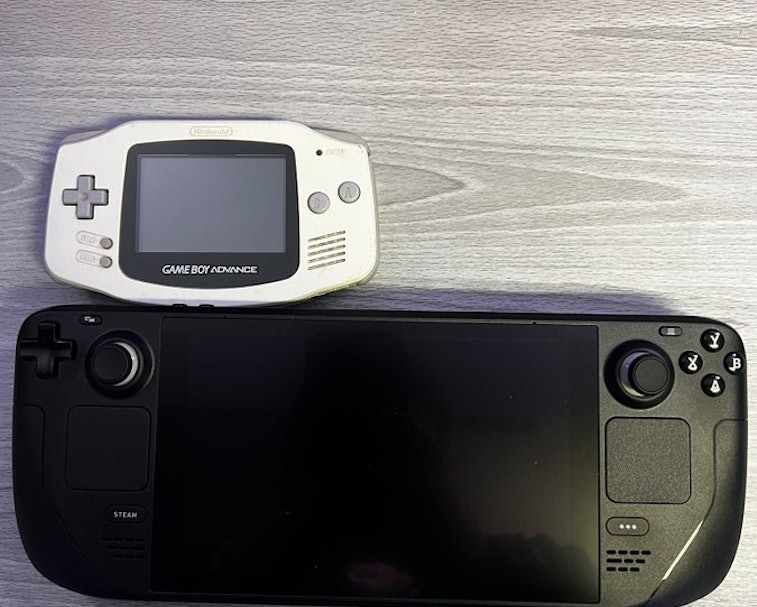 We’re all eagerly awaiting the release of Valve’s Steam Deck, so much so that we’ll take any scraps of info. And thankfully, someone has delivered. Cary Golomb, a YouTuber known for his extensive reviews of handheld gaming devices, posted a Twitter thread putting the Steam Deck next to other popular handhelds.

This might be the first time we have some visual reference for just how the Steam Deck could fit in our hands. But I have to admit, it does look like a chonker in comparison. Just take a look at it next to the Nintendo Switch (OLED model) or the original PlayStation Portable (PSP).

But maybe it’s more fair to compare the Steam Deck to one of its contemporary competitors. For that, let’s take a look at it next to an Ayaneo Next, which is basically just a souped-up Steam Deck.

Handheld aficionado — Golomb has been doing reviews of handhelds on his YouTube channel, The Phawx, since way before they were even cool. Take, for instance, his video from 2017 where he’s running Fallout 4 on the GPD Win 2. The YouTuber has a massive library of videos reviewing everything from the more recent Ayaneo Next to the lesser-known Smach Z, often going into in-depth details about specs and benchmarks.

Unfortunately, Golomb said in his most recent YouTube video, where he actually shows off the Steam Deck, that he won’t be able to spill any beans. It sounds like he’s under a preview agreement where he’ll only be able to discuss certain things once the preview coverage window opens. Golomb also said in the video he’ll be able to speak more freely about the Steam Deck once the review period opens up.

Reviews coming soon — In the post announcing the official launch of the Steam Deck, Valve did note that we can expect some preview coverage and impressions before the press embargo on the PC handheld lifts on February 25. That’s also the same date that the first reservations will finally get the ability to purchase the Steam Deck online.

So we’ll still have to wait for some concrete info about the Steam Deck. But it sounds like we’ll be getting a bunch of previews in the very near future. And hopefully, we’ll get down to the nitty-gritty details like benchmarks, load-time comparisons, and battery life when Valve lifts the embargo later this month.