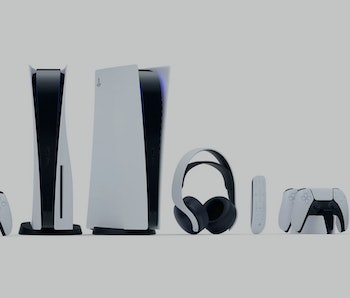 Sony is taking pre-orders for the popped-collar PlayStation 5, but won't say how much it'll cost, or if users who pre-order will even be guaranteed to get one. We also don't know if the lucky ones who do get to buy one will get to choose between the digital-only version or the slightly larger console with the optical drive.

"There will be a limited quantity of PS5 consoles available for pre-order, so we will be inviting some of our existing consumers to be one of the first to pre-order one from PlayStation. Pre-order reservations will be taken on a first-come-first-serve basis, so once you get an invite via email, we encourage you to follow instructions and act fast. If you are interested in receiving an invitation, register below. If selected, we will contact you via email with instructions and details," the message on the pre-order page reads.

To sign up, users need to supply their PlayStation Online ID (PSN) and ensure it's associated with the same email they provide. Sony still hasn't said how much the PS5 will cost, though, but rumors put the pricing around $499. It'll likely be a little cheaper for the non-optical drive version.

Uh-oh, here we go again — While we admire Sony's desire to drum up hype ahead of its next-gen console's release — slated for the end of this year — we can't help but be nervous. First, we can't help but think about the Sega Saturn debacle. Sega announced the Saturn at E3 and said it was immediately available, catching retailers off guard, and ensuring they either refused to carry the console or didn't promote it at all.

Second, Sony’s notorious for getting hacked and having its online systems go down. That leaves us nervous about sharing our details with it, but even more worrying, concerned about whether or not we'll actually get a pre-order.

Fingers crossed your number comes up — Fineprint on the pre-order page explains that if you are selected, "[Sony] will contact you via email before pre-orders start. If you do not receive an email, you were not selected."

We, frankly, don't need this added stress right now. But hey, at least we're not retailers, right? Because they're going to be more than a little put out by this move. Put out enough to snub the PS5 like they did the Saturn? Probably not. It's going to be one of the most in-demand items for the holidays (alongside Microsoft's next Xbox). But it still not wise to trifle with the retailer network, which gets to choose how prominently to position product and which items salespeople push hardest.

Not really a surprise — We were warned back in April as the pandemic ramped up that Sony might have trouble meeting initial demand for the PS5 and would likely have limited units available at launch. We'd foolishly hoped that those production woes might have been overcome and we needn't worry about units being snapped up by opportunists and resold at a huge premium by opportunists, as happened when Nintendo Switch numbers ran low earlier this year. Now we're worried about that again. Thanks, Sony.

Despite all of this, we can't help be excited. We're warming to the console's unusual design (time softens most things, even the internet's derision), and the lineup of launch titles looks amazing (their packaging isn't bad either), as did a preview of Unreal Engine 5 that chose the PS5 as the hardware of choice for showing off its ray-tracing and billion-sprite-count graphics.