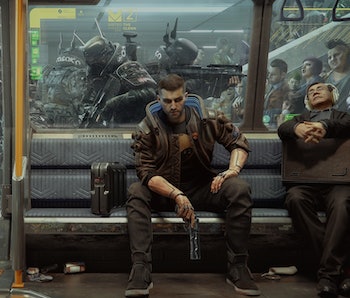 After a week of customer complaints and gamers (including Elon Musk) dunking on the game's developer, CD Projekt Red, Sony has pulled Cyberpunk 2077 from its PlayStation store. The company will also be giving refunds to anyone who purchased the game through its digital storefront.

Cyberpunk 2077 has been an object of controversy since it was first announced in 2012. The Polish outfit behind the title had delayed it multiple times and assured customers that they wouldn't resort to "crunch," an abusive work environment common in the gaming industry. In the midst of the COVID-19-related gaming boom and next-gen console launches this year, Cyberpunk 2077 was rushed to market before the holiday season, resulting in an extremely buggy, unfinished game.

Players have complained about genitals morphing through clothing, endlessly falling through the ground, constant crashes, and even tiny trees littering entire set pieces within the game.

This week, CD Projekt Red offered customers a refund on any purchase of the game for any platform, much to the surprise and frustration of console makers and retail partners. Now, Sony is taking independent action of its own. To obtain a refund for the PlayStation version of the game, you can visit Sony's dedicated page.

In a tweeted statement, the company said:

The PlayStation version of the game will continue to receive updates and patches alongside other editions of the game.

XO — The PlayStation version of the game is notoriously the buggiest experience of the platforms the game has been released on. Many players have seen better success on high-end gaming PCs and Google's Stadia, which is certainly not a situation Sony wants to be in. The game has also not been released for next-gen consoles like the PlayStation 5, which likely could handle its expansive world with more ease.

Bounce back — Known for its long support of titles like The Witcher 3: Wild Hunt, CD Projekt Red has promised customers multiple patches for the game in the coming weeks and months, with ports for next-gen consoles coming in early 2021. "Together these should fix the most prominent problems gamers are facing on last-gen consoles," the company noted. This may be too little, too late for the legendary developer whose stock price has collapsed since the game's rocky launch, costing somewhere in the neighborhood of $1 billion.

Warning signs — As it is unprecedented for the company to pull a AAA title like this, and with the game already removed from Sony's storefront, it remains to be seen if or when the title will return to the platform. The game's issues — and CD Projekt Red's reckless decision to release the title long before it was ready — were obscured by the fact that the company did not distribute many review copies of the much-anticipated title and, for the journalists able to play the game, barred outlets from using in-game footage in their coverage.