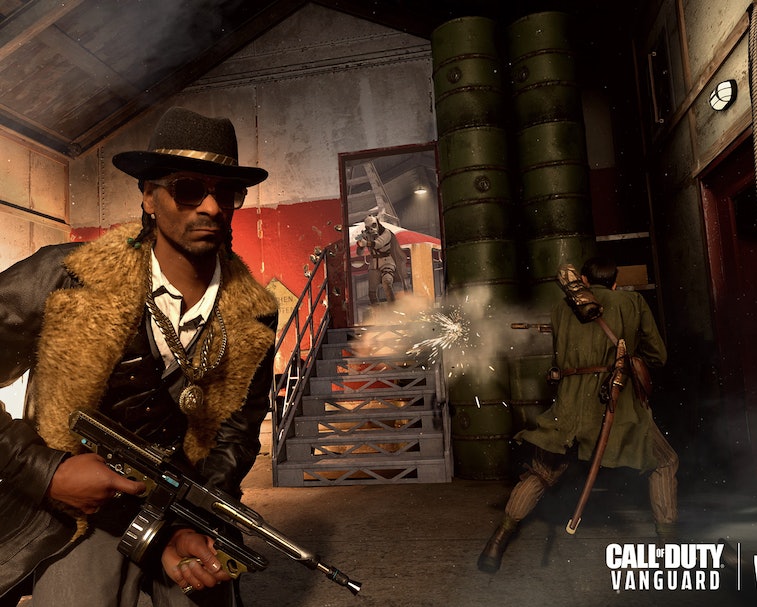 Last month Call of Duty (CoD) announced in a blog post that Snoop Dogg (or at least his likeness and voice) would be coming to Vanguard, Warzone, and Mobile on April 19. While the grammy-nominated artist was only acquirable in CoD: Mobile through a draw that took place on April 1, interested parties can purchase an operator bundle in Vanguard and Warzone for 2,400 points or about $19.99, that includes Snoop Dogg himself, ten additional items (three of which are Vanguard exclusives), and an operator progression track.

Completing this progression track will give users weapon XP, three additional outfits, and some other cosmetic goodies. The Snoop Dogg package for Mobile differs from the console/PC versions in that it is decidedly grander — his operator is equipped with a 24k gold embroidered outfit and a new signature weapon that is chock full of gold plates and diamonds.

The addition of Snoop Dogg, noted weed-aficionado, did not arrive without plenty of nods to the sticky icky. Even the release date, a day before 4/20, was intentional on Activision’s part per its official announcement: “It’s no coincidence that he’s [Snoop Dogg] joining the fight right before a certain unofficial April holiday.”

Smoke the competition — Aside from a release date that coincides with national weed-smoking day, the operator bundle comes with three legendary weapon blueprints, which hammer home the point that Snoop Dogg does in fact have an affinity for marijuana. One of these weapons is a sniper rifle dubbed “Bong Ripper,” another assault rifle is referred to as “West Coast Bling,” and rounding out the trio is an SMG hilariously entitled “Tha Shiznit.” All of these guns come with green weed tracer rounds, whatever that means.

This inclusion in the CoD franchise isn’t even Snoop Dogg’s first involvement with the shooter — his voice was used in CoD: Ghosts. The rapper is now known more as a business mogul, rather than a recording artist, after taking over his former record label, Death Row, and he also recently filed for a trademark to enter the hot dog market.