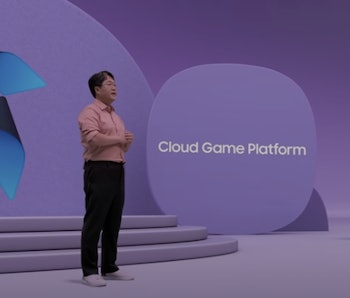 When it rains, it pours. While the cloud gaming space is not what you would call new, the arena hasn’t yet been dominated by a single standout service. Google continues to tinker with Stadia, Amazon has its own sub-par equivalent in Luna, and Nvidia is beefing up Ge Force NOW with dedicated RTX 3080 support. And now, Samsung has announced that it plans on entering the fray by leveraging the technology of its existing smart TVs, which are powered by the open-source (OS) system, Tizen.

The announcement was delivered in the middle of Samsung’s Developer Conference keynote and was sparse on details. There is no launch date and we don’t know what sorts of games will be available, or whether the service will be available on other platforms. It seems Samsung is trying to keep users spending time within its smart-device ecosystem. According to the company, Tizen “is now powering experience in over 200 million devices.”

Will an existing device be enough?— Google’s cloud gaming service, Stadia, has a bare-bones requirement list. Prospective users only need a Google Chromecast and a controller to get started. Based on what was presented in Samsung’s developer keynote, it seems the company is mirroring this approach. But is the gaming experience irrevocably tied to convenience? Obviously, it’s nice to be able to game without an exhaustive setup but people aren’t going to get into a game, much less a gaming-adjacent service, if the product itself isn’t good. Stadia is solid but leaves much to be desired — is this the kind of service Samsung wants to put out?

There isn’t too much to speculate on when it comes to Samsung’s potential cloud gaming platform so really all we can do is wait.