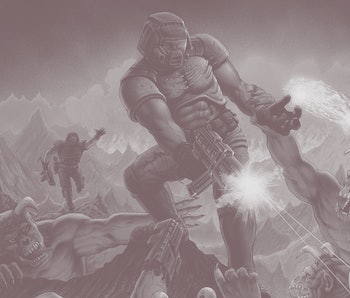 On April Fools' Day, a trailer for a ray traced source port of the original Doom emerged on YouTube. Despite the timing, this mod is anything but a joke — it really works, and you can download it right now.

The mod is called PrBoom: Ray Traced, and it's on GitHub here. Essentially, sultim_t managed to add ray tracing to the popular PrBoom source port, which is noted by Doom enthusiasts for its accuracy. (It's not the most popular port, though — that title belongs to the more mod-friendly GZDoom). The RTX effects add an incredible amount of atmosphere and dread to the simple graphics of 1993, and the ultra-saturated colored lighting is reminiscent of early '00s shooters like Unreal.

Currently, the mod only supports the first three episodes of the original Doom — sorry for all the "Thy Flesh Consumed" fans out there, all seven of you. It's also not clear whether or not it'll eventually include Doom 2, which is basically more of the same game. Personally, I'd like to see these effects applied to classic Doom level packs like Scythe or Sunder, and it seems likely that will eventually happen. The bad news here is that while Doom might run on your calculator, you definitely cannot run this source port without a RTX-enabled GPU.

Doom is the latest game to use RTX to great effect, but it's far from the first. The ray-traced version of Minecraft has been on PC for a while now, and we've heard rumors it's coming to Xbox eventually. Meanwhile, Quake 2 RTX is still free on Steam, and it's probably the most impressive implementation of the technology yet. I'm holding out for Blood RTX myself.