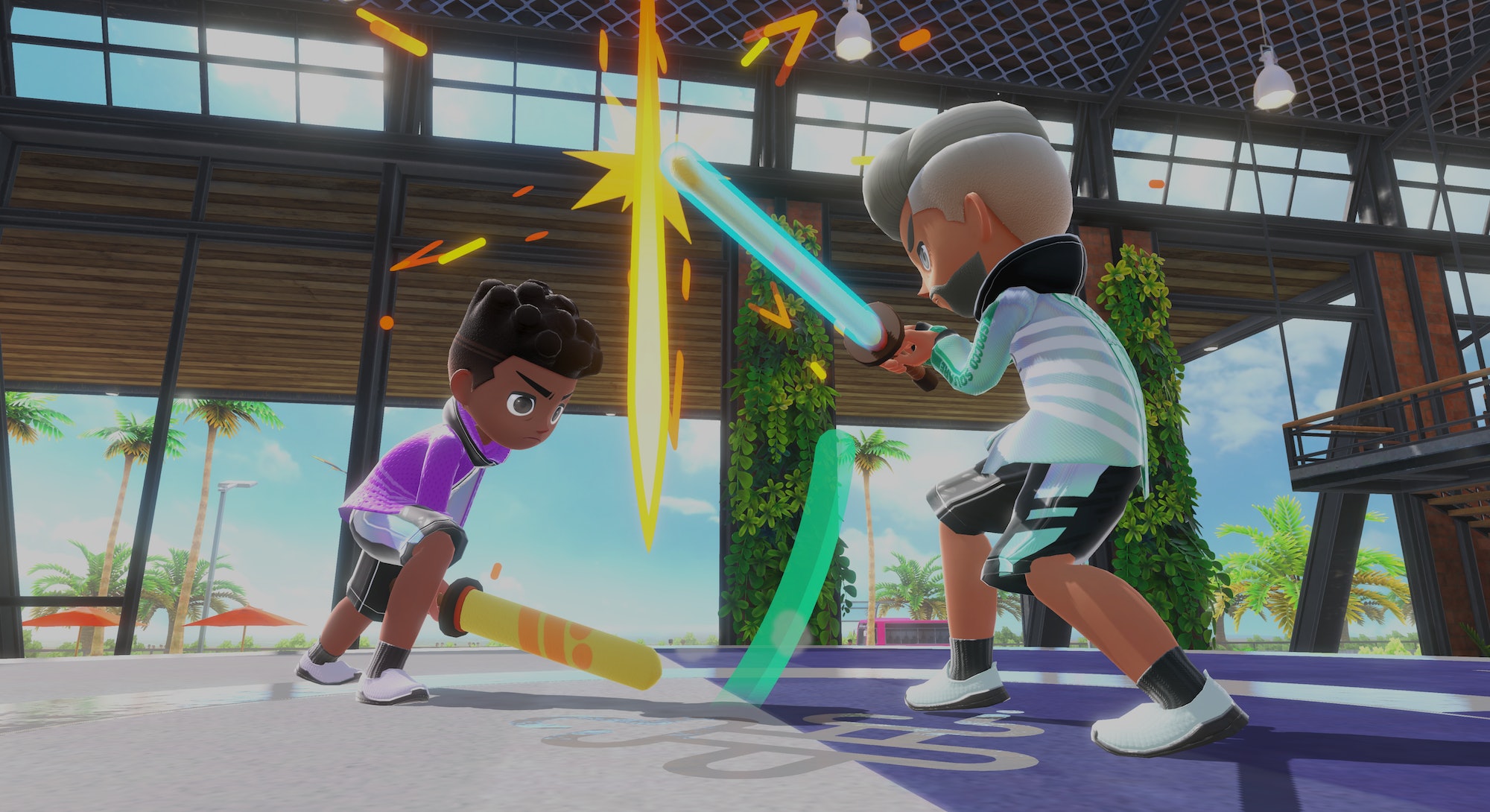 Nostalgia is a hell of a drug. Tapping into it can either lead to tremendous success or completely backfire. Hindsight will tell us what becomes of Nintendo Switch Sports a throwback to the original Wii Sports classic with six games, three old and three new.

Unless you were not born yet or too young to remember, everyone knows where they were when Wii Sports took over the planet following the early years of the Wii's launch in 2006.

Bundled as a pack-in game with the Wii, the motion-controlled sports game literally rocketed Nintendo's underpowered console to the top of the charts. With intuitive easy-to-understand Wii Remote controls that mimicked each respective sport (five in total — tennis, bowling, golf, boxing, and baseball), customizable Miis, and natural multiplayer party appeal, Wii Sports quickly became the most-sold game of all time by 2017.

I broke a light sweat kicking my Joy-Con-strapped leg at a TV.

Nintendo followed up Wii Sports with Wii Sports Resort in 2009 with more accurate motion controls via the Wii MotionPlus accessory for the Wii Remote. The mostly forgotten HD remake of Wii Sports, Wii Sports Club, was released in chunks starting in 2013 before being bundled together in 2014. Though improved in all ways over the original Wii Sports, neither games rekindled that nostalgia that catapulted the Wii and the game into the mid-aughts zeitgeist.

Switch Sports is another stab at reworking Wii Sports for another console — this time the seemingly unstoppable console-handheld Switch. Last week, Nintendo invited me to give Switch Sports a spin for about an hour. I broke a light sweat kicking my Joy-Con-strapped leg at a TV in soccer and returning balls in tennis and badminton, and got a little too into it trying to attack Nintendo's PR in chambara (swordplay). Bowling is a classic with a new revamped four-player multiplayer; there’s also a new volleyball that turns up the difficulty.

Coming out on April 29, Switch Sports is attempting to tap into what made Wii Sports so much fun over 15 years ago and keep Switch sales steady as the console moves through its fifth birthday.

The Wii heralded motion controls and the Wii U supported Wii Remotes and even came with a Wii Sensor Bar, but the Switch has never really leaned hard into the motion controls built into the Joy-Cons. Sure, some games like Mario Kart 8 Deluxe have motion controls for steering and Nintendo has had the occasional motion-controlled game like launch title 1-2-Switch, fitness game Ring Fit Adventure, and cardboard-construction-set-mini-game Nintendo Labo, but none of them are as self-explanatory as Wii Sports.

The reason Wii Sports sold everyone — young and old, gamer or not gamer — on motion controls was that they worked like their real sports counterparts. Swing a Wii Remote to mimic a tennis racket or a baseball bat or a golf club. Throw punches with a Wii Remote and Nunchuk in boxing. Or aim a Wii Remote like you were holding a real bowling ball and follow through in your release.

Switch Sports brings the motion controls back to the front row. The digital version sells for $39.99 and doesn't include a leg strap for a Joy-Con; this version is best for Switch owners who already have one from Ring Fit Adventure. A cartridge version of Switch Sports includes a leg strap and costs $10 more at $49.99. Choice!

This is not a review of Switch Sports since I only had an hour to try the six games out, under the watchful eye of Nintendo's cheery spokespeople. I'll reserve thoughts on whether the game offers enough value for when I've spent serious time playing it by myself and with friends in person, but from what I saw, the game seems to be a good mix between old and new.

This time around, the games do not require a sensor bar of any kind. The gyroscopes, accelerometers, and IR sensor within the Joy-Cons are supposed to offer a similar (if not more advanced) motion-tracking. It was tough for me to make any comparisons to Wii Sports Resort and the Wii MotionPlus (or a Wii Remote Plus with built-in MotionPlus) since I haven't played that game in years. But from what I saw, the Joy-Con controls were good enough; tracking for your Nintendo avatars mostly felt accurate. In some games like volleyball and tennis, I did feel like maybe there was a teensy bit of lag between, say, a swing or an upward gesture, to the corresponding on-screen action.

Tennis and bowling, arguably the two best games from Wii Sports, are back and as addictive and competitive as ever. In four-player local bowling, you no longer need to wait for other players to finish their turns for you to go ahead and try for a spare; it's a small tweak but one that speeds up the pace of the game.

Badminton is really similar to tennis. Chambara, a swordfighting game where you attempt to knock your opponent off a platform, is one that will get players riled up if they've never played swordplay in Wii Sports Resort. Soccer and volleyball are the toughest of the six games included in Switch Sports.

Yes, you kick a giant soccer ball — I got major Rocket League vibes while playing — into a goal that gets smaller to make things more challenging. But when you're playing versus a team (real or computer), the motion controls take a back seat; each player uses a pair of Joy-Cons with one analog stick for running, buttons for charging or jumping, and a motion gesture for kicking. The leg strap accessory is not used in this mode and the controls can be hard to grasp for quick play. Similarly, volleyball's gestures for bumping and setting didn't feel as responsive as I expected them to be.

Of course, my demo time was under the pressure of a ticking clock, and the fact that the event was one of the first press events I've attended in a while so I can't discount any overwhelming excitement and level of anxiety in my part. Again, at home or in a more relaxed setting, it's possible soccer and volleyball might end up being easier than I experienced.

TL;DR: I had a boatload of fun playing Switch Sports. It brought back fond memories of a time when it was normal hanging out with friends and family to play video games in front of a TV. The timing of its release couldn't be better — just as the world returns back to normal (some normalcy) and social activities are back on deck.

Switch Sports launches with the six aforementioned games, but a seventh (golf) will be added for free in the fall via an update. I asked Nintendo if we can expect more sports games (new and old) to be added via updates. I'm sure people would love to play baseball or archery or table tennis from the past Sports games. Nintendo wouldn't say whether more games are coming — free or paid DLC. It's possible even they don't know yet and will make decisions based on how well Switch Sports sells. If the Booster Course Pass DLC for Mario Kart 8 Deluxe is any indication, paid DLC to expand a game is at least possible.

Maybe the game will just be a good excuse to get everyone together.

I look forward to playing Switch Sports with my friends, family, and coworkers at Input. At this point, maybe the game will just be a good excuse to get everyone together in a room to scream in each other's faces. God, I miss doing that without the fear of virulent particles landing us in quarantine.