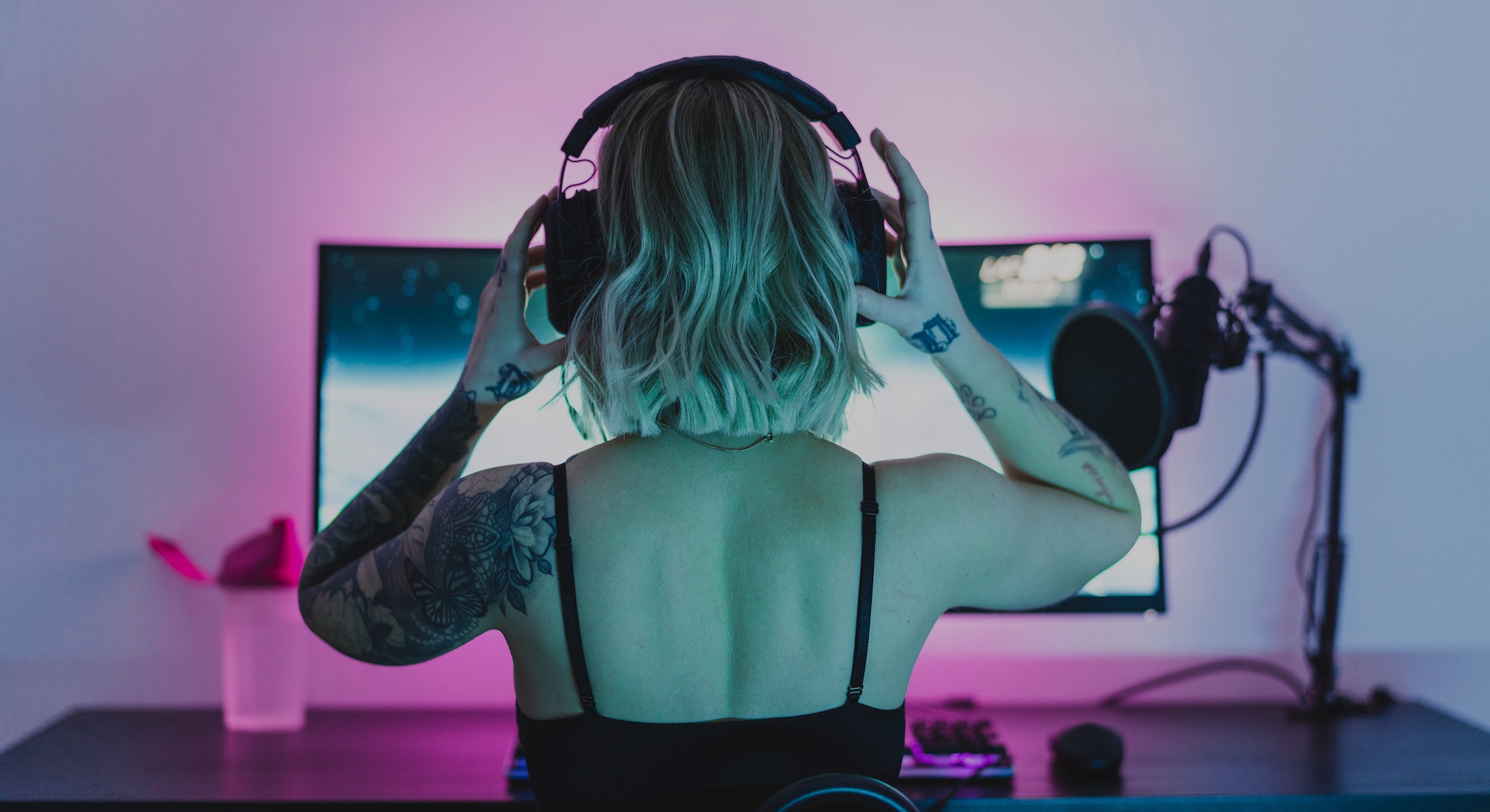 Back in May, when the streaming platform Twitch announced the release of more than 350 new “identity tags” that could be used to sort streams into distinctive categories, Jess Bolden was excited.

The 25-year-old FACEIT Games Esports analyst, who lives between France and Italy with her female partner, streams the game Rainbow Six Siege, a largely male-dominated pursuit. Bolden was once Samsung team head coach for the game, which she streams under the name JessGOAT.

She figured she could use the new “lesbian” tag to show other lesbian gamers that her stream was a safe space for them. But, Bolden says, she felt conflicted. “I would look at the tag for that extra second, to question myself, and I’m usually confident in everything that I do,” Bolden says. “So there’s obviously a problem.”

Bolden’s hesitancy was justifiable. Twitch has been widely criticized for an ongoing scandal involving “hate raids'' aimed mostly at its BIPOC and LGBTQIA+ users. These attacks are carried out by bots programmed to spam streamers’ chats with offensive messages. The conditions became so bad that Twitch users started a campaign — #TwitchDoBetter — to push for change, and at one point arranged a digital “protest” where streamers boycotted the platform in solidarity with hate raid victims.

While hate against streamers is common, lesbians feel they are the subject of both sexism and a specific kind of sexualization. “We get multiple DMs, like ‘I could turn you straight’ or ‘You haven’t found the right guy,’” says Baeu, an 18-year-old lesbian streamer from Florida who broadcasts to followers under the name Spoink. Baeu is a member of Lilac Lesbians, a Minecraft Championship team hoping to increase lesbian representation in gaming. (Input is withholding the last names of most of the streamers in this piece out of concern for their safety.)

Many lesbian users have repeatedly been messaged by men determined to “change” or “fix” them.

“Even when I was underage, they’d still message me inappropriate stuff,” Baeu adds. “Twitch’s solution was pretty much: ‘Oh, well you have your messages open.’” She adds that multiple reports she’s submitted to the company about harassment have not resulted in any action against offending users.

The “lesbian” tag has only increased harassment, according to Bolden. “‘I hate gays’ is probably the most common [comment],” she says. “Or people complaining that I’m a lesbian.” All of the streamers interviewed agreed that they had seen abuse aimed specifically at lesbians, ranging from statements like “of course you’re a lesbian — you’re fat” to assertions that the lesbian streamers were “going to hell” because of their sexuality.

One user even had her chat spammed by bot accounts named after her recently deceased dog. On top of all this, many lesbian users, including Baeu, have repeatedly been messaged by men determined to “change” or “fix” them.

While Twitch didn’t directly answer many of the questions Input presented the company with, a spokesperson did offer this: “Harassment and hateful conduct of any kind are unacceptable and strictly prohibited in our Community Guidelines. We take steps to enforce against this type of behavior in all verified cases where it is reported to us.”

“I want Twitch to IP ban these accounts,” says Ash, a 36-year-old lesbian vtuber who uses an avatar to communicate with her followers. Like Baeu, Ash — who streams under the name FitnessToCosplay — feels abandoned by Twitch and angered by its inaction against bigoted trolls. IP bans — which allow someone’s whole device, rather than just their online accounts, to be banned through their unique IP address — would be far more effective in her eyes.

Twitch has rejected the efficacy of IP bans in its Combatting Targeted Attacks guide, claiming that the effectiveness of such bans is “limited” due to “bad actors” who are able to circumnavigate them.

“Twitch will always tip-toe the line so it’s seen that they’re doing enough.”

“If they only ban one account, they come back,” Ash says. “They see us banning all these people, yet all they’re doing is suing them. They’re gaining money from this. And I bet we won't see one cent, even though we’re the ones suffering.”

Bolden, as a professional online gamer, is well-connected enough to have had anti-troll chatbots created for her. However, she recognizes this isn’t possible for many other streamers. “I have someone who is extraordinarily knowledgeable at coding to do the job that Twitch should’ve done to begin with,” she says. “I don’t know how [others would] stop a hate raid from happening, and I did information systems tech in the Army. I would probably just stop streaming if it was me.”

Twitch, Bolden says, needs to do more. “I think Twitch goes up to the line of what's expected, but will never cross it,” she says. “They will always tip-toe the line so it’s seen that they’re doing enough.”

One way in which Twitch has attempted to do “enough” is through its Hateful Conduct and Harassment Policy. Introduced in December 2020, it was designed to protect BIPOC, LGBTQIA+, and women streamers — all of whom, Twitch acknowledged, receive frequent abuse on its platform. The policy came into effect in January and banned many words associated with hate on the platform.

Unfortunately for Twitch’s lesbian community, one of those words is “lesbian.” The community claims that the word is flagged as “sexual content” by automoderators on Twitch, while words like “gay” are not. Months ago, Twitch also auto-banned the word “sapphic” (a lesbian identifier) from the platform, although this has since been resolved.

“Why is [the word ‘lesbian’] even a consideration for being banned?” asks Samantha, a 31-year-old lesbian streamer. Samantha is a member of Death 2 Divinity, an all-fat, all-queer Dungeons & Dragons live show, and streams under the name TheVerbalThing. “Somebody is using it to describe themselves and their community. Twitch needs to focus on actually listening to its members. It feels like the things being asked of them are frequently ignored.”

“We have community guidelines that set boundaries about what’s acceptable on Twitch, and that includes rules banning hateful content, language, and behaviors,” Twitch’s spokesperson tells Input. “We’re constantly working to improve upon the safeguards we have in place. We know we have more work to do, and we are deeply committed to this work.”

Creators are understandably angry. While Bolden isn’t going to stop streaming any time soon, she is frustrated about sharing her money with a company that doesn’t protect its users. “I'm mad that I give 50 percent of my freaking earnings to a company that just wants to toe the line,” she says.

Bolden is also frustrated about alleged inequality at the higher levels of Twitch streaming, which she believes has impacted her financially. Although Bolden feels that Twitch has “good intentions,” when it comes to celebrating its LGBTQIA+ and women users, she says it doesn’t seem to pay them as well.

“If I compare the amount of LGBTQIA+ and women streamers who have a 50-50 split with Twitch compared to the men, who probably have a 75-25 split with ad agreements — which I don’t have — we’re about to have a big fucking issue,” she says. “That's the double standard.”

“Once Pride is over, you don’t see [mention of] LGBTQIA+ streamers at all, let alone lesbians.”

Input was unable to verify these claims, as Twitch does not disclose information about creator financials. However, a recent leak of streamer payouts (confirmed to be authentic by Twitch) shows that Bolden, with 90,300 followers, earned $234,228.35 in 2019 from streaming 18.5 days of Rainbow Six Siege. Gotcha, a male Siege player with a far humbler 24,600 followers, earned $144,430.43 (over half of Bolden’s earnings) from streaming for 17.5 days.

Streamers like Baeu, Ash, and Samantha — none of whom make a living through Twitch — aren’t worried about money or financial agreements. They just want their community and its concerns to be acknowledged and heard outside of Pride Month.

“Once Pride is over, you don’t see [mention of] LGBTQIA+ streamers at all, let alone lesbians,” says Ash. “But we’re not seasonal! We’re lesbian all year round. It’d be nice to get some recognition.”