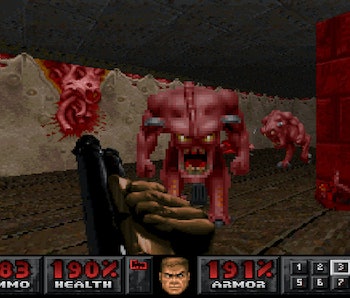 The name John Romero carries a lot of weight when it comes to the genesis of the first-person shooter genre. Romero famously set the template for what is now the modern FPS by going on a development run that included the creation of Wolfenstein 3D, Doom, and Quake. Now, three decades later, the game designer is releasing a memoir that dives into his personal life and career. It will begin shipping in February 2023. You can pre-order the autobiography now through Romero’s official website.

The memoir will cover everything from how his career took off, “sneaking computers out of the back door of his day job to do programming projects at night in his garage,” to the major moments of his life in the gaming industry, like his “high-profile falling out with id Software cofounder John Carmack.”

It’ll also go into the intimate details of his youth and growing up with “an alcoholic father, a racist grandfather who did approve of Romero’s parents’ mixed-race coupling, and a grandmother who once ran a brothel in Mexico.”

Hyperthymesia — Romero has a memory condition called hyperthymesia, which allows people to recall their past with an unparalleled level of accuracy. It’s likely the memoir will reflect this focus on detail, transporting readers into the moments that he writes about through pure minutiae.

There will certainly be fans who are eager to learn about Romero’s story, considering Doom still has a dedicated community. Earlier this year, the genre pioneer released a new Doom II level in order to raise money for the ongoing war in Ukraine. Romero’s aforementioned developmental run in the ‘90s, which led to the creation of Wolfenstein 3-D, Doom, and Quake, will probably not be replicated again in such a short span of time (all three were released within a four-year span). The modern equivalent might be FromSoftware’s release of Dark Souls, Sekiro, and Elden Ring, but even that took place over 11 years.