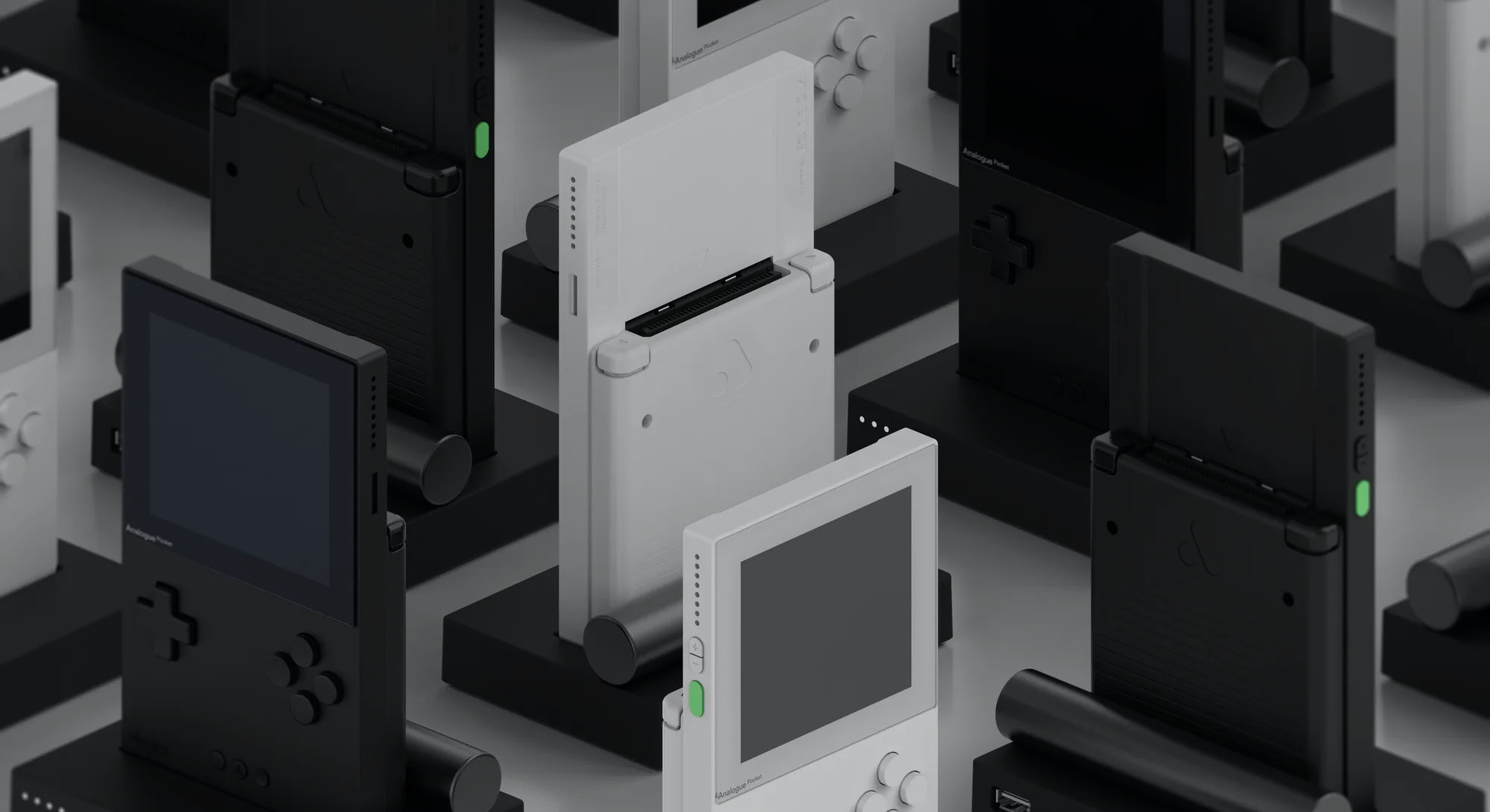 I have ordered every widely available product Analogue has ever released.

I am what you could call a "fanboy" (if you've ever argued iPhone vs. Android) or a "stan" (if you were on pop music Twitter in 2011) or a "simp" (if you're a white dude trying to seem cool by appropriating AAVE). I've drooled over its designs, I've coveted its software, I've raved about its collaborations.

But I'm starting to think I've been rooting for the bad guys.

I'm beginning to resent them

Is this going to be about capitalism? Yes, obviously, but it's more than that. Retro gaming has never been a hotter retail category, and with all of America, and much of the rest of the globe, stuck at home, this should be the company's moment to shine. Yet, I'm beginning to resent them.

When Analogue first showed up on the scene a few years ago, almost nobody knew what an FPGA was. Analogue itself did not immediately release any products based on the technology. Some of their early drops consisted of old NES consoles, gutted and refurbished with a new case and a suite of new digital A/V ports to better enjoy classic titles like Super Mario Bros. 3, released under the name "Analogue NT" as well as what it called a "Neo Geo CMVS," which was essentially a consolized version of Neo Geo's MVS arcade hardware. While these garnered rave reviews, they cannibalized existing retro consoles which both limited its ability to produce products and is a big no no for game preservationists.

Which is when they pivoted to FPGA. We've talked about FPGAs on Input a bit but if you're unfamiliar, FPGA stands for “field programmable gate array.” It's a type of computer chip which, unlike normal processors, can reprogram its physical logic gates to emulate other computers or electronics on a hardware level — meaning that for something like a game console, it can theoretically duplicate and display games as they would have appeared on original hardware in pixel perfect accuracy. This means that unlike (most) software emulation, you will never find a game that is compatible with original hardware that is incompatible with an FPGA. It also frees the system up from input lag, which can make games in software emulation feel mushy and wrong.

A community of FPGA gaming fans has emerged around an ongoing project called the MiSTer, which is an FPGA system with hardware as easy to assemble as Lego pieces and software as easy to get running as most iOS apps. The MiSTer has many cores available for it, meaning that it can easily transform into a Super Nintendo, Game Boy, Neo Geo arcade, or one of a host of other discontinued game consoles with the press of a button. Because of its community of hobbyist developers, the MiSTer has certain quirks and unfinished features that might turn off anyone looking for a plug-and-play device — but which also means that the MiSTer platform is growing, expanding, and perfecting itself nearly every single day. Unlike most gadget purchases, buying a MiSTer means buying a product that appreciates in value.

Buying a MiSTer means buying a product that appreciates in value.

You can see why this technology also appeals to a company making expensive products for the discerning retro consumer. The MiSTer leaves a hole in the market for a single-purpose device with the kind of polish and aesthetics that only a professional can deliver. Which is where Analogue comes in, teamed up with FPGA programming whiz Kevin "Kevtris" Horton. First, the team set their sights on a new "mini" FPGA version of their NT, called in some world-class designers, and spun its marketing department into overdrive. The rest, as they say, is retro history.

Today Analogue offers four main products, the NT Mini, the Super NT (Super Nintendo), the Mega SG (Sega Genesis), and the upcoming Analogue Pocket (Game Boy, Game Gear, etc.), though you'd never know it. For all the talk of FPGA availability, Analogue products have never gotten easier to actually purchase; there are only a handful of drops each year with only the Mega SG ever being truly in stock. While this limited availability makes their products more coveted and sought after, it's caused quite a bit of pain and frustration within the company's consumer base.

The recent pre-sale for the Pocket was perhaps the most egregious example. People waited nearly a year for the chance to purchase one of the company's $199.99 handhelds only for the product to sell out in mere minutes — following an issue with its shipping partner whose plug-in crashed during the pre-order and prevented many customers from completing checkout. Twitter had a meltdown over this. Since the product was releasing nearly a full year from the pre-sale date, many feared they wouldn't get their hands on a Pocket until 2022. Even Elijah Wood was pissed.

Then there was the earlier NT Mini debacle, where fans (like me!) paid upwards of $499.99 with tax and shipping (Analogue charges notably high shipping rates; it's a whopping $100 to ship to Australia) for the "final" run of the system, only for the product to be delayed several months. Normally this would be within the acceptable rate of delay, given that we're living through a global pandemic. The issue fans are having is that alongside the delay, possibly as a way to soften the blow, Analogue announced that this final run of NT Mini consoles would have a suite of new features that gamers didn't know about during the pre-order period. Many fans, who decided not to pursue purchasing a NT Mini would have pre-ordered the console had they known that it was a substantially better product than was advertised, are now left in the lurch.

Rumors are swirling that Analogue will debut another NT with these additional features using a cheaper build quality and aiming for a lower price point. But, again, the company's mercurial ways prevent anyone from knowing when and how to plan for such an expensive purchase.

There's always eBay, however, where scalpers, who know just how limited Analogue's stock tend to be, snap up all the hardware they can and charge insane mark ups for the chance to buy it secondhand. People were selling the Analogue Pocket for almost $500 the day after its pre-sale.

The only person I've seen who is openly criticizing the company is Bob from RetroRGB, who has correctly identified the biggest problem with Analogue's exclusivity going forward: It doesn't create a healthy user base. You see, Analogue is pitching its latest and greatest creation, the Pocket, as a platform for third-party developers to create FPGA cores and games for. If a developer decides to take the company up on this deal, forgoing the chance to work with Panic on it's Playdate or making an indie title for the booming Nintendo Switch, they'll have almost no guarantee that there will be a market of consumers for their software or games since most people will never get the chance to buy one.

Compounding this is the fact that the larger FPGA community has rallied around the open-source MiSTer project, the components for which are widely available to purchase, encouraging collaboration and community in retro and game preservationist fandoms. By developing for the Pocket, you're saying that nobody gets to experience your game or core unless they can luck into the chance of spending a bunch of money on a luxury product — and they certainly can't use your code to make something of their own. It all smacks of elitism and inequality at precisely the time in technological history when there has never been less of an appetite for either.

Analogue tends to get all the details wrong

And it's not just the core concept of the company that should give you pause for concern, if it somehow doesn't. It's also that Analogue tends to get all the details wrong.

For example, there was the time when it miscalculated the import costs for shipping a product and charged customers credit cards again for an additional amount with absolutely no notice. Hope you had overdraft protection! Then there's the company's DAC (digital-to-analog converter) which converts HDMI signal to something that can work on an old-fashioned CRT TV. Unlike other DACs on the market, it only works with Analogue's hardware, naturally. There are the issues with its consoles' pin connectors damaging expensive, rare game cartridges because they were improperly tested (the company says they've resolved this). There's the fact that the company claims that its consoles aren't developed to allow sideloading of ROMs via the SD card slot but then, mysteriously, a perfectly safe, utterly polished jailbreak firmware pops up online without any work from the hacking community. Why not just be honest? There's also the time when it charged top dollar for cartridge adapters that would allow Mega SGs to play Game Gear, Master System, and SG-1000/MK-III games… except, oops, the Game Gear adapter would break your system and your game! Hope you didn't use it yet – and don't mind waiting several months for us to make a replacement.

In fact, I've had my own terrible experience along these lines. The following may read like a personal grievance but please take it as illustrative of the overall issues the company's policies are creating:

I bought a Mega SG that I absolutely adore. Analogue then announced that it would be releasing adapters for the console, which I leapt at the chance to purchase. More games for my beloved Sega clone? Yes, please! Somehow I missed the notoriously short pre-order window and was forced to turn to the gray market on eBay, where I knew I'd pay an exorbitant price for the accessories. Luckily I found a listing and got my order in a timely manner. Hooray! Thank you capitalism! Except for the aforementioned Game Gear issue, which meant one of the three adapters I'd purchased was, essentially, very pretty garbage.

So guess what I had to do? You're right! I had to wait for another one of the company's exclusive drops and purchase a second set of Mega SG adapters. Hey, at least this time I didn't have to triple the price because of eBay scalpers!

I think the people behind Analogue have good intentions, as far as any corporation can, and I don't begrudge them for their growing pains as a company. But it's unavoidable that their core business concept, as a competitor to an open source project designed specifically to be more marketable and less consumer friendly, is hostile towards the very hobbyist market that it's supposed to be catering. Add to that the company's complete inability to care for its customers, no matter how much they're paying for that privilege, and its aloof communication and you have a perfect storm of resentment and frustration. There are other ways to compete. There are other ways to market a premium product. There are other ways to incentivize repeat customers.

There are other ways to compete

If only Analogue lived up to the high standards its aesthetics and marketing promised, there would be a place in the market for both its luxury fare and the scrappy little MiSTer. But unless something changes, I, a person who owns nearly everything they've ever made, can no longer recommend their products to anyone considering them. Game over.

Update: A previous version of this story incorrectly identified one of the adapters in the Mega SG adapter set. We regret the error.