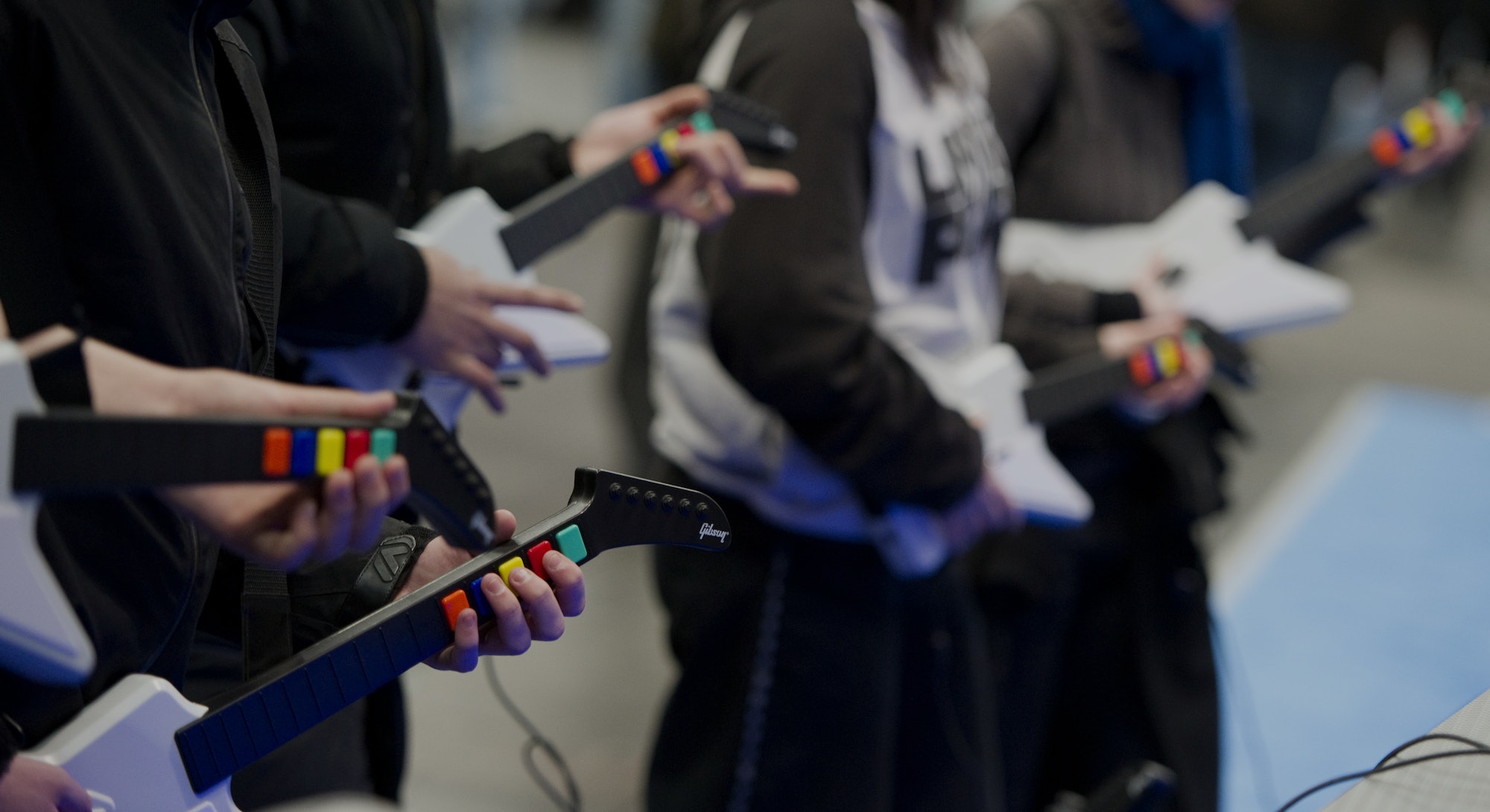 Armed with a plastic guitar covered in stickers and operated by a Wii remote, I was a Guitar Hero legend. My venue: the living room couch. My audience: anyone who pretended to be impressed by my superhuman video game skills.

With the focus of a Buddhist monk, my fingers danced up the controller’s colorful fret faster than lightning. Facing the television, I could play “expert” level holding the controller behind my head; I could shred “Bulls on Parade” with my eyes closed; I could even beat Satan in a guitar battle. Seven years old in my underwear, I discovered rock music and the deep sense of euphoria that would shape my future.

For the uninitiated, here’s how the game works: You strap on a controller that resembles a small guitar, but instead of six strings, there’s five buttons and a “strum” bar that flips up and down. You pick a song, a giant guitar neck pops up on the television screen, and notes start flying at you on their respective “strings” that correlate with each button. Here’s the tricky part: when the notes enter the designated zone at the bottom of the screen, you’ve gotta not only press your finger on the correct buttons but also hit the strum bar at the right moment. It’s like Dance Dance Revolution for your fingers, but instead of Japanese dance pop you get rock and heavy metal.

Two years after I had worn out the same 40 songs, which were played with the same five buttons, I begged my mom to get me a real guitar. And that led me down a never-ending journey: I expanded my taste in music, hung Nirvana posters on my wall, waited in concert lines for hours, spent after-school hours in a musty garage playing Kings of Leon covers with my neighborhood drummer friend. I wrote songs, formed a band, performed at local venues. I became obsessed with rock music.

I begged my mom to get me a real guitar.

I often wonder how many kids across the world Guitar Hero has affected this deeply. The third installment of the franchise, Legends of Rock, was the first video game to reach $1 billion in sales and, for a while, was the highest-grossing game ever in the United States. According to a 2008 study of 12 million British children, over half of them played music video games and 2.5 million were inspired to pick up real instruments. Titles like Guitar Hero are the reason modern chart-toppers like Post Malone started playing guitar.

The game didn’t just turn gamers into musicians, either. It turned video game executives into music executives. “Guitar Hero influenced my life into a different direction. It changed my profession,” said Matt Ramey, former creative director for Activision who now runs digital marketing for rock bands. “I never would have worked in the music industry if I hadn’t done all the work I did on that game.”

More Than A Game

The Guitar Hero series was wildly successful and influential because of its authenticity. The games’ soundtracks were carefully curated, and the developers treated the music with respect while also poking fun at “typical rock tropes.” The innovative guitar controller created a visceral experience, allowing players to really feel the rock ‘n’ roll fantasy. Guitar techniques like using hammer-ons and a whammy bar were built into the game’s mechanics, and the on-screen note mapping felt incredibly natural and consistent because Guitar Hero’s developers were guitarists themselves.

Real guitarists could have written off Guitar Hero as gimmicky, but it had rock icons on its side. According to Ramey, legendary bands like Metallica and The Smashing Pumpkins understood the appeal and praised the string-to-button integration. An animated Slash was front and center on the third game’s cover, while the band Poison performed at its 2007 launch event in Los Angeles.

As hip-hop began to dominate the charts, Guitar Hero turned a generation of kids onto rock. Seventy-six percent of players bought the game’s music, spanning across decades. Aerosmith’s “Same Old Song and Dance” spiked in sales by over 400 percent after its feature on Guitar Hero III, and the band made more money off Guitar Hero: Aerosmith than from any album they ever released. The franchise also spotlighted bands like Franz Ferdinand and Silversun Pickups, which were just getting started at the time.

“The series introduced rock and heavy metal to a younger audience,” said Adam Goldberg, former executive producer of Activision. “Transversely, Guitar Hero also introduced gaming to a much broader audience than video games had before.”

If not for Guitar Hero, my life would be very different.

While the core audience of the franchise is men aged 18-34, Guitar Hero transcended age and gender and redefined what it meant to be a gamer. Strong playable female characters and a diverse soundtrack appealed to guys and girls, both old and young. And it’s one of the few series loved by people who had never picked up a controller in their lives, as well as those who hold Guinness World Records for topping “expert”-level high scores. Harmonix’s mission as a company was to let everybody experience the joy of making music.

"The idea was to make the player feel like a musician without having to spend all that effort getting there,” said Egozy. "Guitar Hero put you center stage in the music-performing experience, and that was awesome."

Guitar Hero is an equalizer. I idolized Slash and Tom Morello because I could be them. Despite the cartoony graphics and my lack of real musical talent at the time, I saw myself on that animated stage. I learned how to perform, testing my tricks in front of my grandparents on the couch. I learned how to practice, playing “Knights of Cydonia” hundreds of times before finally getting through the hard part. Most importantly, I uncovered the real me, discovering music that mesmerized me and developing a sense of confidence only a half-naked 7-year-old could have.

If not for Guitar Hero, my life would be very different. The game means the world to me because, in many ways, it shaped who I am today.

A couple days ago, I dusted off the Wii and dug out the old guitar controller. I was a bit rusty, missing some notes my younger self wouldn’t have forgiven me for, but I still had it. Bouncing around my living room, hair flopping in my face, I had the swagger of Jimi Hendrix and the soul of Carlos Santana. Controller behind my head, volume on full blast, I was invincible