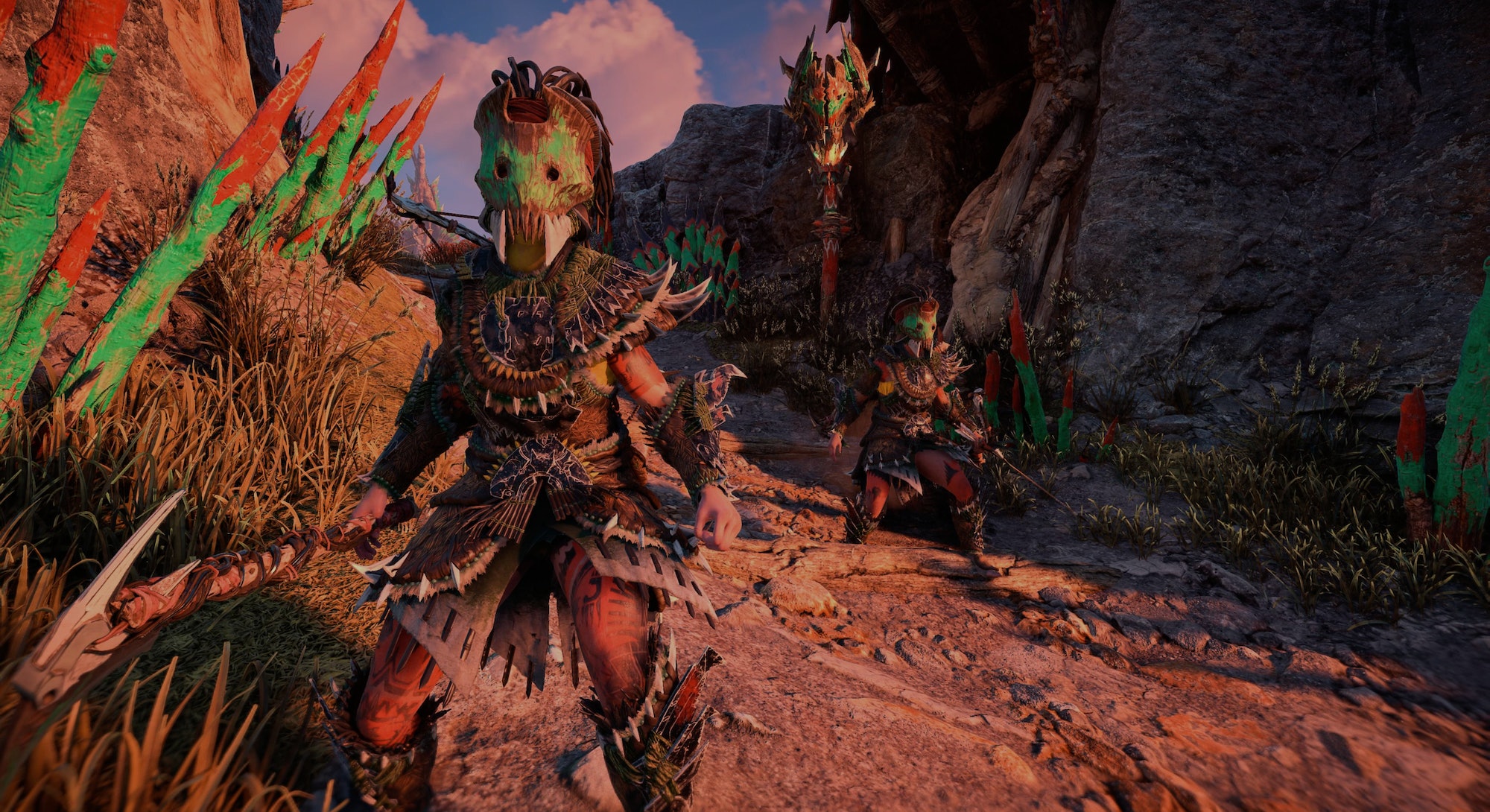 In John Gast’s 1872 painting “American Progress,” a towering woman dressed in white robes floats toward the left side of a landscape with a book in one hand and telegraph wire in the other.

This woman is Columbia, a personification of the United States — of Manifest Destiny — and she's seen guiding white settlers from the fields of the east toward something more ominous: a gloomy Pacific coast where snarling animals, a herd of frantic buffalo, and in a nauseating comparison, a small group of Indigenous men, women, and children flee from her advance.

“American Progress” is repulsive to anyone with a cursory knowledge of the conquest of the Americas and, particularly, the conquest of the nation west of the Mississippi River – it’s is an artistic representation of the kind of beliefs necessary to commit the atrocities of westward expansion.

More than 200 years after colonization in the American frontier, stories of white expansionism like the one pictured in "American Progress" are still being reimagined and retold through pre-revisionist Western films, novels, and less obviously, through games like the recently released big-budget action title, Horizon Forbidden West.

Forbidden West is a sequel to 2017’s Horizon Zero Dawn by Amsterdam-based Guerilla Games. Picking up where its predecessor left off, a warrior protagonist named Aloy must leave her birthplace in the east to venture forth into a swath of post-post-apocalyptic continental America unseen in the prior entry. She heads to the “Forbidden West,” a region that she is warned is eminently dangerous to outsiders, populated as it is by various factions of the fictional Tenakth, who are described as uniquely vicious and terrifying.

As in Zero Dawn, Aloy and the rest of the game’s characters are members of a future society recovering from a climate disaster that involves robotic dinosaur creatures (don’t ask) and a series of advanced artificial intelligences that, long story short, reintroduced humanity to Earth without giving them any knowledge of technological progress or global history before their time (no, really don’t ask). These fictional characters are depicted in leather and fur clothes, ornamented with bits of scrap metal and beads; they hunt primarily with bow and arrow, spears, and tripwire traps live in mainly small cities built from brick and thatch, and refer to each other’s tiny nations as “tribes.” The game calls them “primitive.”

The characters represent a dissonance of post-racial harmony (the various factions are racially and sexually diverse) and a pan-Indigenous worldview that collapses an entire world’s worth of specific cultures into a smattering of aesthetic references picked out and employed as costumes. Though they’ve forgotten the history of the world that came before the apocalypse, Forbidden West’s factions, in a limited geographic area, may wear clothing inspired by pre-conquest Mayan priesthood and royalty in one instance while, in a neighboring village, characters wear white dotted face paint in the style of the African Xhosa.

Aloy herself may change her clothes to partially hide her ginger braids beneath a range of ornate headdresses; protect her body with fur-lined buckskin; and apply face paint borrowed from the cultures of those she meets as she explores the Forbidden West.

Horizon’s use of Indigenous culture as an “early civilization” aesthetic shorthand — along with terminology that uses “primitive” and “tribal” as descriptors for its characters — was criticized when Zero Dawn released in 2017, notably by critic Dia Lacina in an article for Mic. Then, as now, the implication that the aesthetic shorthand of culturally indistinct Indigenous clothing signifies a lack of progress signals the same kind of insidious worldview as that which motivated the “progress” of Manifest Destiny — that of ethnic cleansing and racism in the name of European-defined civilization building.

Though Forbidden West is able to justify her role as white savior through science-fiction doomsday rationale, her story carries echoes of a very real history.

Five years later, Forbidden West harbors the same problems by continuing its flattened, nation-agnostic use of clothing and architectural design while strengthening its intent to make its post-apocalyptic setting more explicitly American (undermining denials that its inspiration ranges further, to include Vikings, at the same time).

The plot setup described earlier sees Aloy heading west to assert herself into the affairs of factions who have long resisted incursions and slave-capturing raids by an eastern empire called the Carja. She goes there to save the world from a mysterious blight. Determined to solve this problem, Aloy journeys into a region that’s presented explicitly as a frontier, which is in one character’s words, home to people for whom “violence is the native tongue.” Though Forbidden West is able to justify her role as white savior through science fiction doomsday rationale, her story carries echoes of a very real history.

This is reinforced through a sequence that sees her enter the West as part of a tense diplomatic meeting between the eastern Carja, who the westerners rightfully despise for their past raids, and emissaries from the Tenakth. The meeting is ambushed by a breakaway Tenakth faction, still eager to avenge the Carja Empire’s aggression, and ends with the slaughter of those working toward peace. Their attackers’ leader, Regalla, is presented as single-mindedly brutal and warlike — a ruthless version of the frontier peoples — whose villainy is motivated by the reasonable refusal to forget the East’s past atrocities, which goes largely unquestioned throughout the game.

From this shaky early footing, Forbidden West attempts to right itself by showing that the Tenakth (excepting Regalla’s forces) who Aloy encounters are not a shadowy, unknowable enemy but are, of course, ordinary people just like her. Though she follows the path of an old Western, making a dangerous journey into the “frontier” to better the lives of the entire continent (and world), Aloy is a 21st-century cowboy who doesn’t fall so easily into the kind of close-minded racism of the foolish Carja or the evil Regalla. She, as the savior figure in a modern action game, is enlightened enough to avoid reductive thinking.

This element may offer a welcome complication to the plot, but it fails to make up for the hollowing of actual history in order to make an action game. Though Forbidden West wants to present an alternative vision of an abstracted, nobler westward expansion, its use of Indigenous cultures as blanket aesthetics and the context-stripped recreation of 19th century horrors its plot offers speaks to a cultural blind spot whose implications hinder a proper understanding of the past, and present day.

Jan-Bart van Beek, Guerilla art director and creator of the Horizon series, made his studio’s intentions clear in an interview with Launcher, describing the game’s plot as “sort of like a Western story, with a girl riding on horseback, traveling over the Great Plains.” This quote explains the kind of rationale that informs Horizon’s choices, ignoring how loaded its evocation of the past is in favor of a romantic, narrow view of the western conquest as one of daring adventures through lush, forbidding landscapes by heroes motivated by a desire to save those who cannot save themselves.

The lack of thought given to the history of its setting is contrasted pretty directly by a sequence toward the end of Forbidden West. In it, a character named Tilda van der Meer shows off her collection of paintings, friezes, and sculptures by the Dutch Masters, giving specific insight into a nation and culture from the pre-apocalyptic times and describing, in detail, the lasting qualities of work by artists like Rembrandt and Vermeer. The game’s creators should be proud enough of their country’s heritage to make room in their plot to highlight Dutch art, but doing so with such specificity furthers an unflattering comparison between which national cultures and histories are worth assessing in specifics and which are allowed only to exist as generalized aesthetics.

“Don’t be so quick to dismiss the comfort we can find in art,” van der Meer says if the player guides Aloy away from the gallery, eager to get back to the thrills of her quest. “Or the insight we can gain.”