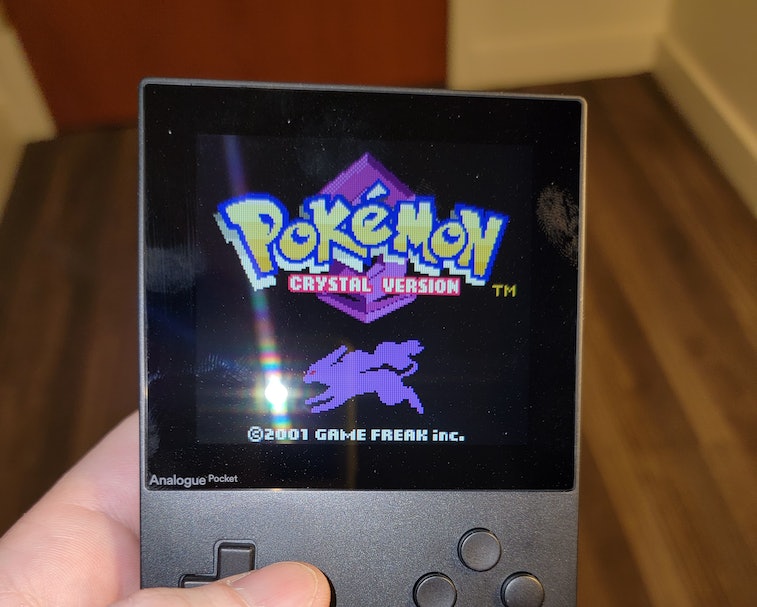 Analogue’s Pocket is the new handheld that finds itself operating in the niche of premium retro-gaming experiences. Emulators are so passé when there are a number of companies manufacturing true-to-form replications of using a Nintendo 64, or in the Pocket’s case — everything Gameboy and then some. As pointed out by Input’s Ryan Houlihan back in August, 2020, the Pocket will give you some of the best pre-DS handheld gaming entertainment out there.

Orders for the Pocket officially opened last week, but the eventual fulfillment of said orders cover a wide range. For example you could receive the handheld by March, but others will still be waiting until 2023 to receive a device they ordered over a year prior.

Almost as soon as people were able to begin handwringing over the fulfillment group they were placed into, others are already figuring out ways to enhance that eventual unboxing: A Twitter user by the name of @zhuowei made a copy of Pokémon Crystal available for Pocket users as a ROM file. Zhuowe made these files accessible through a Google Drive link, which then need to be converted through Macrobledo, a website that has an online web-based ROM patcher.

Enthusiasts Only— Now, to be clear the Pocket is targeting a fairly niche demographic. Only the most retro-obsessed will have already placed their orders for the handheld and could receive them as early as this week (The Pocket was available for pre-order ahead of the official opening last week). The reason being that Pocket is an FPGA, which basically allows it to emulate electronics down to the hardware level — say goodbye to lag.

Aside from the Nintendo Game Boy, Game Boy Color, and Game Boy Advance, the device is equipped to emulate Sega’s Game Gear, Atari’s Lynx, with more system cores possibly arriving in the future.

Initially announced in October 2019, the Pocket became available through pre-oder the following August and sold out immediately. Since then though, a litany of delays has plagued the Gameboy lookalike. First, a May 2021 shipping date was moved to October, before being pushed even further to December. As you can probably guess, the company cited health restrictions and affiliated supply chain issues as the primary reasons for the delays.