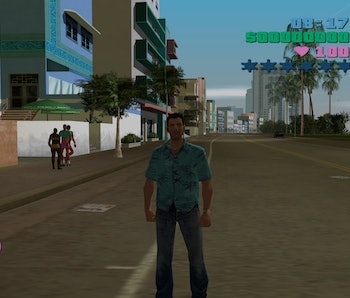 Rockstar Games changed how video game studios approached open world experiences, from something that had little to no precedent, into the kind of template that frames modern classics like Zelda: Breath of the Wild. It all began with Grand Theft Auto III, which was released 20 years ago today. To commemorate the anniversary, a release date has been announced for the remastered GTA Trilogy, a bundle that includes the aforementioned GTA III, GTA: Vice City, and GTA: San Andreas. The collection is set to drop on November 11 for a $60 price tag and will be available for all systems: PC, PlayStation 4, PS5, Xbox One, Xbox Series X/S and Nintendo Switch.

The possibility of a GTA VI release in the near future has morphed into a punchline of sorts, with leakers claiming the latest iteration of the franchise won’t come out until 2025. Instead, the fandom will have to hold itself over with a refreshed look at some of the titles that started it all.

To clarify, the bundle that releases on the 11 will only be available digitally. Physical editions will come out later, on December 7. Both releases are positioned for the holidays and could serve as gift ideas for the GTA fanatics in your life.

What will be different? — While the original versions of each game in the trilogy had been available through a variety of digital outlets for smaller price tags than the $60 bundle, a number of tweaks have been made. For starters the overall graphics and visuals are enhanced, offering a cleaner look at the variety of sand-box worlds that the games take place in. Higher resolutions, GTA V-inspired modern controls, rebuilt lighting systems, and upgraded character and vehicle models pepper the classic environments of Liberty City, Vice City, and San Andreas. All of the changes in the games were adapted to modern consoles through Unreal Engine, and still maintain the distinct aesthetics of the originals.

Specific enhancements have been rolled out that are dependent on platform as well. Next-gen consoles like the Xbox Series X and PS5 will be able to run the games in 4K at up to 60 fps. The Nintendo Switch version features Switch-specific controls including Gyro aiming, as well as touch screen camera zooming, pans, and menu selections. PC users will have support for NVIDIA’s Deep Learning Super Sampling (DLSS).

If there’s anything we know about Rockstar, it’s that the studio knows how to keep its flagship franchise(s) relevant, without needing to drop new iterations every year. In-game upgrades, DLCs, and now remastered releases keep the fan base satiated. Forget about when GTA VI will arrive and just embrace the fact that it is out of your control — releases like the GTA Trilogy will help you come to terms with that.