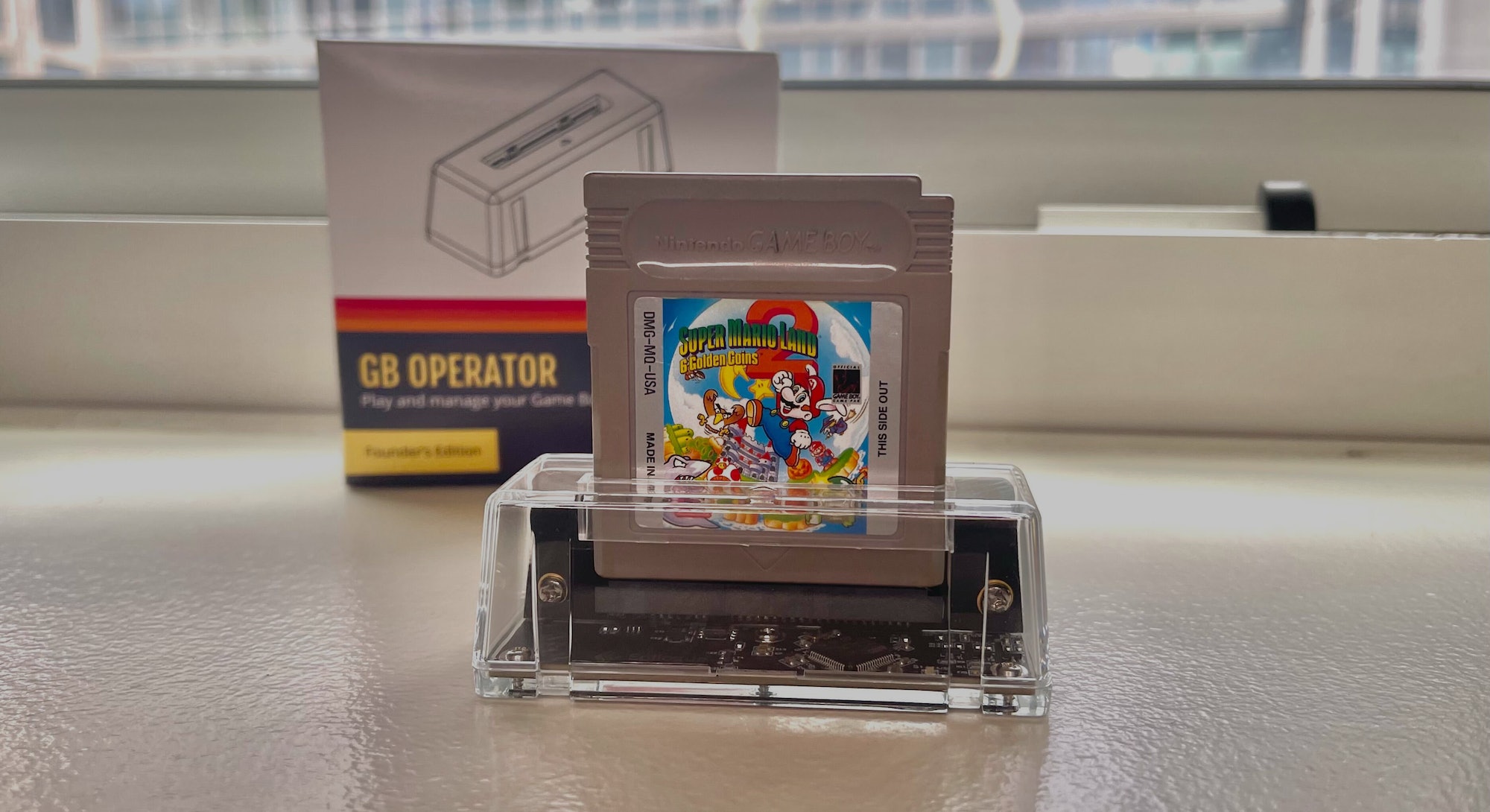 Game Boy fans are legion. We hoard ROMs, photograph everything, and even rebuild our consoles into monstrosities Nintendo never intended to exist. Now, thanks to the GB Operator, our save files are also immortal.

Romanian start-up Epilogue, not to be confused with analog gaming competitor Analogue, has just released the new device, which enables Macs and PCs (soon Linux too!) to read Game Boy cartridges. For just $49.99, the GB Operator lets you play your Game Boy cartridges, rip your own (legal) ROMs, back up precious save files from games like Pokémon, check a cartridge’s authenticity, or even pull photos off of a Game Boy camera.

This is Epilogue’s first product, but thanks to its polished build quality, you’d never know it. The packaging is perfectly ‘70s chic, as is the current fashion, complete with a USB-C cable and small set-up manual.

After removing the unit from its packaging, the device is (blessedly) transparent — giving off the Y2K vibes necessary to properly access a gamer’s latent Game Boy fandom. The dock itself seems perfectly at home sitting next to any desktop or laptop computer, displaying a given cartridge for however long a user may need to authenticate and rip a game. The rubber coating that Epilogue has opted for is a particularly satisfying way to know your precious physical titles won’t go slipping and sliding around a desk.

As for setup, the GB Operator is extremely simple to get running: Just plug it in, install the app, and pop a Game Boy cartridge in. Once it's in place, the dead-simple app lets you play any Game Boy or Game Boy Advance title via the extremely accurate mGBA emulator. Thanks to its best-in-class feature set, you can control nearly every aspect of playback: from button mapping to save states to cheats.

The emulation itself boots up instantly and is flawless.

Because of the simplicity of the Game Boy platform as a whole, the emulation itself boots up instantly and is flawless — no lag, screen tearing, or frame rate issues to be found. You can use either keyboard or controller to play your games, which look scale and fabulous on the big screen. (If anything, the lo-fi nature of the Game Boy and Game Boy Advance platforms lend each title a wonderful texture absent from the 2D games of today.) Epilogue also tells us that, while the product does support external controllers, custom button mapping for playback is on its way.

Will you miss having an actual console in your actual hands? Perhaps. But nobody is taking your Game Boy away — it’s still there and fully compatible for all of your more portable needs.

Couldn’t be easier if Nintendo made it themselves (they never would).

Here’s where it gets fun: Not only can the GB Operator rip ROMs and download individual save files from a game — it can also upload save files to a game, meaning you’re free to clone as many Pokémon saves as your cheating conscience will allow. It’s as simple as clicking “Upload Save” and specifying the save file you want to use... that’s it! If only the Switch’s save system were this good.

While I’m normally quite skeptical of using a first-time product from a new company with something as delicate as a game cartridge from the ‘90s, I can wholeheartedly recommend the GB Operator. At $50, it’s a steal for anyone interested in retro games — and way cheaper than Analogue’s yet-to-be-released Pocket FPGA console which, while it comes with a bigger FPGA feature set (like a screen and buttons) and more supported platforms, essentially plays the exact same games in the exact same way.

At $50, Epilogue's GB Operator is maybe the easiest way to play your Game Boy cartridges, backup game saves, and more on your computer.