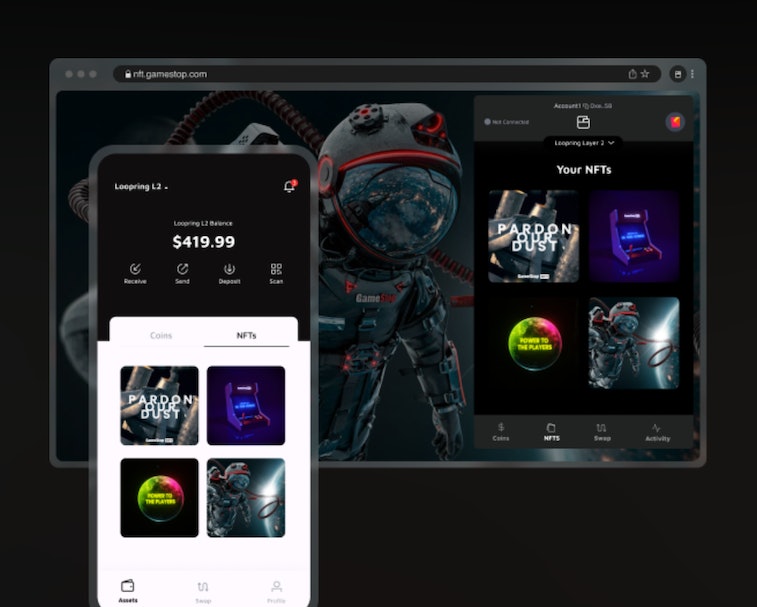 GameStop, once a meme stock, and now a full-throated participant in the hype-driven decentralized economy, is launching its own wallet for cryptocurrencies and non-fungible tokens (NFTs).

The wallet — GameStop’s “digital asset wallet” can be used to store Ethereum-based cryptocurrencies and NFTs and participate in GameStop’s upcoming NFT marketplace, which it plans to launch in the second quarter of this fiscal year.

The crypto wallet uses Loopring for transactions, which is a “Layer 2” technology that exists on top of Ethereum’s blockchain, which claims to offer faster speeds and lower fees than normal transactions. Unlike some crypto wallets that are run and managed by a cryptocurrency exchange, GameStop’s option is also supposed to be interoperable (including support for hardware wallets) and self-custodial.

That means that if you forget your password or the 12-word Secret Recovery Phrase that you set up when you created your account, you’re out of luck. Those receipts of ownership for JPEGs (or more charitably, in-game items) are gone.

“Power to the Players” — Given the recent downturn in NFT sales and the general feeling in the air that the crypto world is teetering on the edge of collapse, GameStop’s timing seems a bit inopportune.

It also reflects how much the video game sellers’ customer base has split. On one side, there are people who still want to buy physical games and consoles (this group has dwindled over the years) and generally want to be as far away from the crypto and Web3 world as possible.

And on the other, there are the r/wallstreetbets investors of the world, who are interested in GameStop as yet another investment whose price can be manipulated and turned for a profit, who separately might be interested in gambling on NFTs and cryptocurrencies on their own.

GameStop says it’s bringing “power to the players” with its new turn towards Web3, and maybe it is. But it’s not the same players and it’s definitely not the same game.