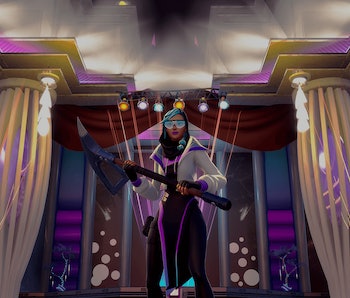 When Fortnite was first released, it was all about the novelty of a battle royale shooter where the randomness in any given match made the playing experience fresh and enjoyable. Since its eruption in 2018, the free-to-play shooter has inched closer and closer to the idea of establishing its own metaverse, a concept that Epic Games was touting before it became ubiquitous among Fortune 500 companies. Accordingly, the game’s new “Party Worlds” feature is the logical continuation of that trend.

In an announcement yesterday, Fortnite revealed it aims to expand on the socialization aspect of its product. Party Worlds experiences are designed as spaces where users can do everything but secure victory royales — in these fan-generated locations, players are encouraged “to hang out, play fun mini-games, and make new friends.”

The two Party Worlds that have been unveiled include Walnut World (designed by fivewalnut), an amusement park that mixes foliage and a Ferris wheel, and Late Night Lounge (designed by TreyJTH), which is exactly what the title would imply. Details on the actual size of these spaces or what is really included in them are sparse, so you’ll have to visit them on your own to see what they’re like.

Different from hubs — Fortnite already had a creative map-making feature in its portfolio, where fans generated distinct islands intended to provide unique gaming experiences. However, this feature was still focused on playing the game, rather than a digital hangout spot. The guidelines for creating a successful hub hinged on these islands essentially being a game unto themselves. Users are tasked with making an easy-to-understand game that could lean into the “multiplayer, co-op, pvp, solo, puzzle, parkour experience or something totally new.” Party Worlds, on the other hand, is geared towards social interaction and puts a premium “on self-expression through emotes, sprays, outfit changes, or other mechanics.”

My biggest question about this feature is, Why would people want to spend more than five minutes in one? Emotes are already a big part of the game, even in competitive modes, and in a vacuum are not going to keep you enthralled. It seems that the mini-games are going to be the big sell for Party Worlds, and the fact that entering one means that a player is trying to meet new people. This new feature is also probably meant to showcase digital merch drops and collaborations.

Whether or not users will turn to Fortnite as a means for social interaction seems to be the big bet that Epic Games is making.