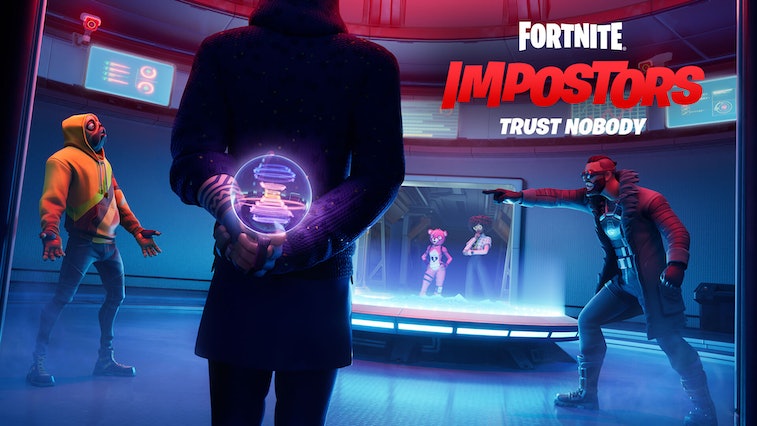 We’re only about a third of the way into the month but it’s already been a busy one for Epic Games. The company has been embroiled in legal issues — Google has countersued and after receiving a favorable court ruling against Apple, the developer of Fortnite still intends on appealing the decision. Despite mostly making waves in the news cycle based on things outside of in-game developments, Fortnite’s actual gameplay still churns on. Earlier in August, Epic added a new game mode to Fortnite that basically functioned as an Among Us copycat. However, in today’s V18.20 patch notes the developer acknowledged where its “Imposter” mode drew inspiration.

“V18.20 brings improvements to Impostors, the game mode inspired by Among Us from Innersloth,” Fortnite stated. “Focus on completing your assignments or polish up your sabotage skills with the new Role Bias feature ... Also, we’ve added an Impostors playlist with open Voice Chat!”

Aside from the recognition, both games interacted with each other on Twitter in the way brands do: A loose imitation of human interaction.

When the Imposters mode was first introduced, Victoria Tran, a community director for Innersloth (the developer behind Among Us) tweeted out some understandable displeasure. I guess this means that the hatchet is buried.

The least they can do — Creating a carbon copy of an indie game to incorporate into another game with a billion-dollar developer behind it isn’t the best look. Even the map layout in Imposter mode was nearly identical to the one in Among Us. It also doesn’t help that Fortnite’s road to success has been filled with accusations of theft, primarily from Black artists. Recognizing that its game was based on source material was the bare minimum.

“Imposter” mode stems from a custom, fan-made mode created last December at the peak of Among Us’s popularity. The Spy Within mode, as it was called, was included in Epic’s Holiday 2020 event. And while an official announcement regarding the potential Fortnite x Among Us collaboration has yet to be made, we can assume that something will be coming eventually.