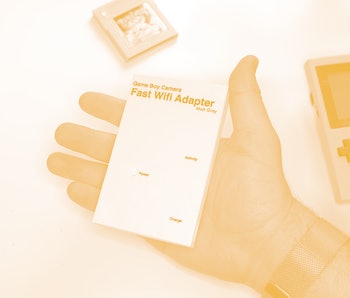 Smile! There’s finally a way to export photos from the Game Boy Camera that doesn’t require a complicated process or a PC. A YouTuber by the name of Matt Gray has created a device that allows users to download Game Boy Camera photos via Wi-Fi using only a phone.

With the Game Boy Camera able to hold only 30 images, the Wi-Fi adapter frees it up to continue taking more pictures. Game Boy Camera photographers can go on longer shoots, able to dump their images onto their phone as soon as the cartridge camera is full. While the Wi-Fi doesn’t offer the same real-time feedback of a digital camera, photographers will have a better understanding of how their images look within minutes. Once on the phone, images will also be much easier to share and edit.

The Game Boy Camera Fast Wi-Fi Adapter works by simply inserting the Game Boy Camera in the cartridge slot and powering on the device. From there, it’s only a matter of connecting to a Wi-Fi signal named “GameboyCamera” and then visiting “gameboy.local” on the phone’s web browser. The plain webpage loads all the images stored on the Game Boy Camera, making them convenient to download. It’s even possible to view previously downloaded images by scrolling further down.

This seems like an instant purchase for any Game Boy Camera owner, but you won’t find this device available for sale anywhere. Gray’s passion project is a one-time creation; it doesn’t mean you can’t build your own.

DIY only — Gray got the idea for the device after getting a GBxCart RW, which can be used to download images off a Game Boy Camera. That device, however, requires a connection to a computer to run, so Gray decided to make a wireless version that he could connect his phone to. After first testing the prototype last year in November, he’s since built a 3D case and added a few other components to make it more portable.

Although you can’t buy one of these on Amazon, building one yourself isn’t too hard, especially because Gray has provided everything you need. The video doesn’t go into step-by-step detail on how to put it together, but you will need access to a 3D printer — or a 3D printing service — and probably a soldering iron. Everything else is easily available on maker sites, such as Adafruit.

The heart of the device is the Raspberry Pi Zero W ($10) — it runs all the necessary code and emits the Wi-Fi signal. The GBxCart RW is the other main component in this build, and it’s what imports the images off the Game Boy Camera. You could just get an external battery to power the device, but if you want to fit it inside the case, you’ll also need a tiny battery pack and a battery charging controller. Everything else can be found on the parts list on the project page. The page also includes steps and the code for the Raspberry Pi, as well as 3D printing files for the case.

The BitBoy is highly recommended by Game boy Camera shooters because it doesn’t require a computer connection. The BitBoy uses an SD card to store the photos, which automatically turns on and begins importing photos when the Game Boy Camera is connected. With a built-in battery, the device is as portable as a Game Boy; it lacks wireless connectivity, but the whole device is pre-built so it’s one less thing to spend time on. The kicker is that the BitBoy costs $100, a price that’s three times the current average cost for a Game Boy camera (about $37 according to Price Charting).

The GB Operator, a PC-connected Game Boy card reader made by Romanian-based company, Epilogue, is an alternative option. You have to sacrifice portability if you get a GB Operator, but it costs half as much as a BitBoy and it can play Game Boy, Game Boy Color, and Game Boy Advance games on your PC as well as back up saves and ROMs. Other ways to transfer images from the Game Boy Camera will vary in cost and difficulty.

The Game Boy Camera continues to thrive even 23 years later and thanks to an active scene of gamers and hobbyists, the toy camera is becoming greater than anything Nintendo ever imagined. Gray’s creation is undoubtedly a cool project that, unfortunately, may be out of reach for most people who are unfamiliar with making Raspberry Pi projects. Then again, with nothing like the Game Boy Camera Fast Wi-Fi Adapter currently being sold, it may be worth attempting to build. What else are you going to do this summer, anyway?