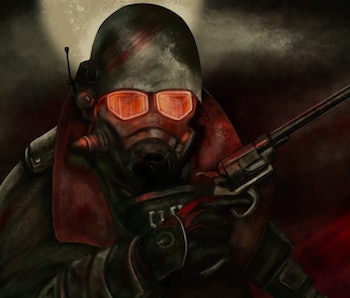 Over the past month, Elden Ring's obscure messaging system — a holdover from previous Souls games — has introduced phrases like "praise the dog!", "try jumping," and the stalwart classic, "try finger but hole," to the vocabulary of gamers everywhere. It’s apparently inspired one Fallout fan to add the game's messaging system to New Vegas via a mod called Building Bridges.

Building Bridges is the creation of modder TommInfinite, and it allows players to etch messages into the ground, ostensibly to help their fellow travelers navigate the dangers of the Wasteland. Like in every Souls game, in addition to crafting their own, any player with the mod installed will be able to see these messages.

Drop a note — These missives can be upvoted, and the more upvotes your messages get, the more you can place on the ground at a time. Obviously, this mod requires an internet connection to work correctly, and it's surprisingly compatible with other notable New Vegas mods that add new areas to the game, like Project Brazil.

Also, unlike Elden Ring, you can actually write whatever you want instead of picking from only a few dozen keywords, so you can be as filthy (or as helpful!) as you want to be. Just don’t embarrass yourself, please. It’s worth noting that this isn’t the first mod from TommInfinite, as they’ve created several standout tools for New Vegas, including one that helps modders create new UI elements for the game with ease.

As a whole, while it's seriously impressive that one modder has put this together, it really raises the question: why hasn't the rest of the gaming world embraced the Souls message system yet, exactly? After all, New Vegas actually came out after the original Demon's Souls innovated the concept, but before Dark Souls had truly popularized it. Now that Elden Ring has sold millions of copies, perhaps we'll see more open-world games take the concept and roll with it.