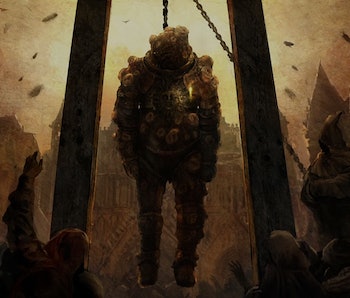 Elden Ring is so expansive that many of us still haven't beaten it — so, one fan and developer has decided to shrink it down to size. The developer, who goes by the name "Shintendo," announced on the game's subreddit that they intend to create a Game Boy-ified demake of the entirety of Elden Ring, starting with the Limgrave area.

That’s Game Boy, alright — That post shows off Shintendo's recreation of Elden Ring's memorable tutorial, which puts the player up against a horrifically powerful foe that is almost guaranteed to kill you. That's exactly what happens in the demake version, though the combat is much easier to grasp given its self-imposed limitations.

As the grayscale footage shows, this is very much an original Game Boy project, created using the newly updated development software GB Studio 3.0, which is surprisingly easy to use. I particularly enjoy Shintendo's take on the series' iconic roll animation — it looks like something right out of an old-school Zelda game. Oh, and the demake will work on a real Game Boy, too.

If you'd like to keep up with Shintendo's project, you can follow development on their Twitch channel. The developer says that they're going to try to finish the game's Limgrave area by the end of May. That would seem like an incredible pace of content creation, but it's not clear if Shintendo intends to recreate Elden Ring's full breadth of optional content, or focus more on the core bosses like Margit.

As Michael Seidlinger wrote in an in-depth feature for Input on the concept, video game demakes have become popular in recent years. Bloodborne PSX, which was released earlier this year, is arguably the most famous example, but there are many others worth looking at. In the meantime, if Elden Ring’s built-in difficulty options aren’t doing it for you, there’s a popular easy mode mod (but it only works on PC).