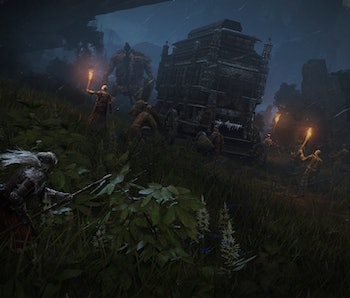 Elden Ring is quite a difficult game, and while it gives you plenty of options for dealing with those tough fights, sometimes you just want to smash the bad guys. If you're a PC player, there are a couple of different ways to make the latest FromSoftware gauntlet into a relative cakewalk, and Odashikonbu's "easy mode" mod is one of the most popular options.

True to the hackers' spirit, the mod gives you three different flavors of "easy mode" to choose from. The first, "Damage Edit Only," reduces the amount of damage you take, increases the damage you deal, and increases your hit radius. The second version adds further advantages for the player, including increasing the amount of runes you get by tenfold and reducing the cost to upgrade weapons. The third version, "Personal Edit," makes the game almost comically easy by removing the mana costs for magic and Spirit Ashes, as well as further increasing weapon damage.

Still, while this "easy mode" definitely makes the game a lot less strenuous, it's far from an automatic win button, which is more than we can say for the various CheatEngine tables that are out there making the rounds. Well, except maybe if you use the "Personal Edit" mode to spam Adula's Moonblade or your favorite Ash of War over and over — but no judgment here, those last few bosses are damn hard.

As of this writing, Odashikonbu's "easy mode" is the fifth most popular Elden Ring mod on Nexus, behind the "Elden Ring Mod Loader" and just another "Grand Merchant," both of which do exactly what it says on the tin. If Malenia's challenge just isn't cutting it anymore, there's also a "hard mode" mod called Prepare to Die that gives enemies a lot more health and stamina. It also makes bows a lot better for some reason. (Finally, you can recreate the Battle of Agincourt in the fields of Caelid.)

While it's nice that these mods exist, it's worth nothing that using them while connected to the internet might get you banned from the game's PvP modes, so exercise some caution here. If you're finding Elden Ring too hard, you can always use tools like the Mimic Veil or summoning jar-headed heroes to help you out, no mod required. It's nice that you have the option, though.