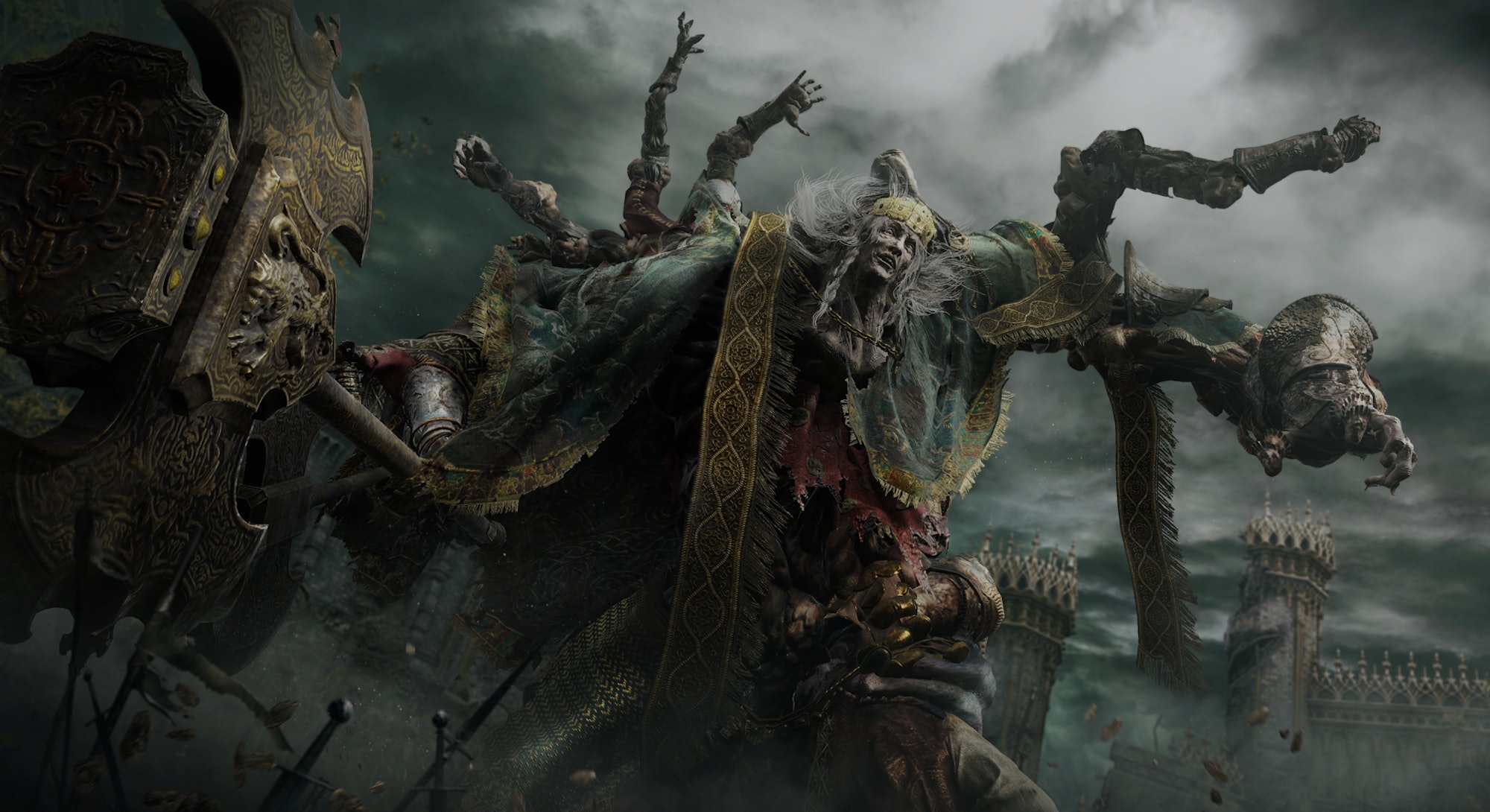 By now, if you pay attention to video games, you probably have an opinion on the following question: should FromSoftware add an easy mode to Elden Ring?

In the decade since the release of the revelatory Dark Souls, this "debate" has been rehashed ad infinitum across the internet, with the same antagonists reheating the same tired arguments to fling at each other like ancient leftovers that've been in the fridge since the Obama administration.

Over the past month, we've seen Elden Ring fans and memesters post videos that show off just how easy it is to beat some of the game's studlier bosses with the right approach. Perhaps you've seen lazy mages laser-beam early game roadblocks like Margit to death with a spell called Comet Azur, or stalwart melee-users delete entire hordes of knights with one swing from the Sword of Night and Flame.

Some players have taken things even further. One of the highest-voted posts on the Elden Ring subreddit shows a player defeating an optional catacomb boss with a surprisingly effective approach: an AI companion (otherwise known as a Spirit Ash) knocking down the beast with arrows, over and over again. The player apparently gets so bored with the routine that they decide to play old-school Windows time-wasters like Minesweeper and Space Cadet Pinball instead.

While this is obviously a niche case — this is one boss fight out of 150+ in the game — others simply back off and let the clone AI companion known as the Mimic Tear one-v-one all of the bosses they can. If you upgrade the Mimic Tear all the way, it can really wreck some of the game's tougher foes almost single-handedly, even after the recent nerf. Some in the community often joke that their Mimic is the "true Elden Lord."

These social media posts might be lighthearted jokes, but they reveal an important insight about FromSoftware's Souls series: though the games are indeed hard, there are many ways to mitigate that difficulty. This has never been truer than in Elden Ring, where you're given an almost overwhelming amount of tools to deal with the game's onslaught within the first few hours. The game might not have an explicit “easy mode,” but players who experiment with their options will definitely find ways of making it easier without much effort.

Make your own fun

In previous entries, your primary option to dial down the difficulty is to summon a few expert helpers (computer-controlled or your fellow players) to back you up, with every failed run costing you vital resources like humanity (Dark Souls) or insight (Bloodborne). By contrast, in Elden Ring, you can burn mana to spawn AI helpers called Spirit Ashes in almost every boss fight with no penalty, and you can even find specific items to improve their stats, just like how you hire the blacksmith to sharpen your sword. There's also the Flask of Wondrous Physick, an early game pickup that grants customizable buffs, such as a few split seconds of infinite mana — which is the secret ingredient in many of the sorcery cheese videos you've seen online.

Elden Ring offers players options to sand down the sharp edges of its brutality...

Regardless of how you feel about difficulty options in games like this — or how you define the tricky but vital business of accessibility — it's undeniable that Elden Ring offers players more options to sand down the sharp edges of its brutality than not only any previous Souls entry, but most "hardcore" games in general. (Indie platformer Celeste is a notable exception, and there are no doubt others.) So, given this, why do some people continue to argue so fervently that the Souls games need more traditional difficulty options, even when series director Hidetaka Miyazaki has made it clear that it's not in the cards? Personally, I think it all boils down to a fault line that divides the Souls community, and I'm not sure it's ever going away.

Within the ever-expanding tent of FromSoft fandom, there's a camp that believes that, when it comes to besting these games, anything goes. This goes beyond relying on your Mimic to carry you through Malenia; we're talking true cheese strategies here, like shooting arrows through a tiny slit in order to kill a boss in a way the developers never intended, or using save/reset tricks to deactivate an enemy's AI so they don't even fight back.

On the other hand, you have players who willfully forsake the tools that Elden Ring gives you in order to impale themselves on the spikes even deeper. These challenge-runs vary in difficulty from mild (not using Ashes or summoning) to the ludicrous (never leveling your character past 1), but they're all valid ways to play the game. YouTuber Iron Pineapple even managed to beat the game without ever attacking.

A MATTER OF PRIDE

So, considering that Elden Ring gives you such a great degree of control over this, what exactly is the difference between cheesing your way through the Lands Between vs. picking an "easy" mode on the title screen? To put it bluntly, the former approach prevents the game from judging you, and that matters a lot more than you might think.

Ridiculous or not, for some of us — especially those who consider themselves "expert gamers" or whatever — there is no little shame in swapping to a lower difficulty mode, especially when you're struggling with a particular part of a game. For example, I bashed my head against God of War (2018)'s secret boss for around 3 hours, but I was too stubborn to go down to "easy," because it felt like admitting defeat.

At the end of the day, while some might judge Elden Ring players for using powerful weapons, Spirit Ashes, or whatever random mechanic they deem to be "cheap," the text of Elden Ring does not give a shit one way or the other. Indeed, FromSoft has nerfed some of the game's most broken tools, including the Sword of Night and Flame and the Mimic — though let's be honest, they're still pretty damn viable — but the company also nerfed one of the game's most notorious bosses, Radahn, after many players complained about his difficulty. (He's since been un-nerfed, sort of.)

Perhaps it's hypocritical of me to write this piece, because I made a point of beating Elden Ring without using Spirit Ashes or summoning fellow players to help me. However, I didn't choose this path because I thought it was more honorable, or "the right way to play" — I simply have more fun playing it solo. To me, the Souls games are about me trudging my way alone through an unfeeling, uncaring world, no matter how stacked the odds are against me. That's how I like to play the game, just like how speedrunners enjoy breaking the game with exploits, or cheesers delight in finding new ways to avoid fighting bosses at all.

Regardless of how you triumph over Elden Ring, you will still ascend to the Elden Throne just the same as a level 1 naked club-user will. Miyazaki does not emerge from behind a curtain and behead your character with a wakizashi after the credits for winning the wrong way. At the end of the day, there's only one person who can judge the legitimacy of your victory, and that's you. If that truth makes you uncomfortable, then I think it says more about you than it does about a silly video game.