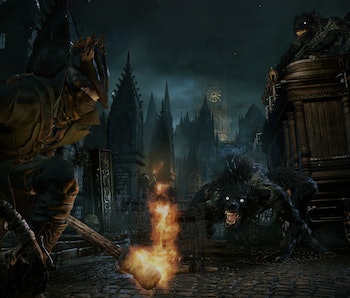 FromSoftware sure knows how to put out a gothic, terror-filled experience masquerading as an RPG. From Dark Souls to Sekiro to the forthcoming release of Elden Ring, the Japanese developer has a knack for capturing what it might look like to carve one’s way through a dire hellscape. While we await the release of Elden Ring, which reportedly may end up shocking even George R.R. Martin, the Game of Thrones creator who contributed to the company’s latest effort, a fan-made remake of Bloodborne that has been in the works since 2017 has finally been released for PC.

Bloodborne PSX, created by developer Lilith Walther, has been dubbed a “demake” — it re-imagines the game as if it dropped a couple of decades prior to its actual 2015 release. The game’s setting in the Victorian city of Yharnam has been pixelated while the sound design received an arcade-ified treatment.

Earlier in January, Input reported on Bloodborne PSX’s impending release. At that time, Walther, the project’s sole developer, noted that there was still quite a bit of work to do — only 20 percent of the known bugs had been worked out, which, if anything, speaks to Walther’s ability to get the whole thing completed in about three weeks.

CRT Vision — Watching the trailer gives off the impression of someone playing this game on an old tube TV, with the vertical grain evoking the same lo-fi atmosphere of an early-aughts horror game a la Resident Evil, Silent Hill, or even Eternal Darkness: Sanity’s Requiem.

The “demake” looks to be a faithful rendition of the original and is available for free through Walther’s itch.io page here.

This nostalgia trip is an interesting look at how different developers treat fan creators — the fact that Walther was able to keep fans informed on her process throughout the game’s creation and even made the game downloadable to the masses is a far cry from, say, the way Nintendo treats the community around Pokémon. Look no further than this sandbox Pokémon FPS that was promptly wiped from the internet after it went micro-viral.

It would be nice for other companies to take the same approach as FromSoftware — if a fan-created project isn’t being released to make money, why go after it?

Speaking to Polygon in a profile from last year, Walther touched on the “demaking” trend that’s been taking hold over contemporary releases: “I would say early gen 3D games are finally starting to hit the ‘retro’ aesthetic that pixel art has been enjoying for years and years,” she said. “I think the rise in popularity of not only BBPSX but many, many indie games that are using a low poly ‘early 3d gen’ art style is proof of that!”