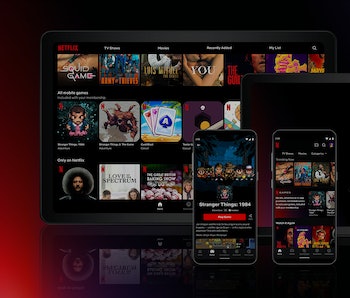 Over the course of the last year, Netflix has been getting involved with products outside of original content, mostly revolving around gaming. Those efforts culminated this week in the release of five mobile games. The games in question: Stranger Things: 1984 (BonusXP); Stranger Things 3: The Game (BonusXP); Shooting Hoops (Frosty Pop); Card Blast (Amuzo & Rogue Games); and Teeter Up (Frosty Pop). This debut takes place a little over two months since the streaming company introduced both of the Stranger Things titles to its Polish Android app.

After setting out to bring in someone to helm its gaming service, Netflix hired a former Facebook gaming executive, Mike Verdu, to serve as the vice president of game development. Since this move was made in July we’ve seen the entertainment giant quietly publish a VR game through the Oculus Store and acquire its first game development studio.

While the gaming space might seem like an odd move for Netflix, a brand that is fixed to the idea of watching a movie, there is an understandable tie-in. Since the service started to focus on putting out original content, some of these releases became enormous brands unto themselves. A steady slew of games can be developed leveraging these IPs, and the company has a lot of source material to work with.

But what about Shooting Hoops? — Despite my last point about Netflix having a huge well of content for potential game releases, only two of the Android games that came out were based on existing shows — Stranger Things: 1984 and Stranger Things 3: The Game. The other three seem like hilariously generic titles, considering this is the beginning of a pivot into gaming. Teeter Up? I would’ve preferred a Peaky Blinders game.

For anyone that may want to try out some of these releases you’ll need an existing Netflix subscription and an Android device. There won’t be a limit on how many profiles on your account can access the games but they are not available on kids profiles. Some of these mobile games will also be able to be played offline.

As emphasized on its social presence, Netflix is clarifying that this debut is still in “its early days,” which seems like a move to get ahead of the inevitable slander.