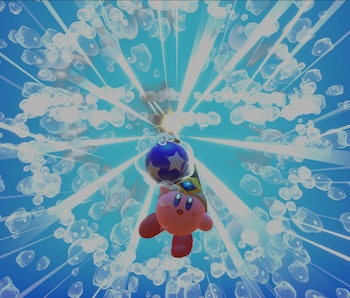 Nintendo has had two of its Nintendo Direct events so far this year, with a third scheduled for later today. The presentations usually provide a look at what the near-future holds for the system — upcoming game and hardware announcements are picked apart and analyzed by the fandom, keeping them engaged for weeks after the fact. We’ll usually also see an additional character added to the never-ending Super Smash Bros Ultimate roster list. Today, however, some new information about some of Nintendo’s flagship franchises was revealed through the company’s Japanese scheduling site: A new Kirby game titled Kirby Discovery of Stars will be dropping sometime in Spring 2022.

The leak is fairly vague — the site only displays a thumbnail photo for the forthcoming game and gives a release range rather than an exact date, and when you attempt to click to access more information the site returns an error message. Scrolling past the Kirby leak reveals another highly-anticipated title set for a Spring 2022 release: Bayonetta 3. Again there is no specific release date for this game either.

Still plenty to keep us guessing — Besides a general release window for Kirby and Bayonetta, the rest of the scheduling site confirms some information we already knew. Both Splatoon 3 and the sequel to The Legend Of Zelda: Breath of the Wild (BOTW 2) will release in the same Spring 2022 timeframe.

All in all, it looks like Nintendo will be kicking off next year with a bang, after a relatively quiet 2021 (in terms of game releases, not console sales — those have continued to boom).

Relax, don’t worry — News for Bayonetta 3 has been hard to come by and this scheduling leak is really some of the only information available for the game. After being announced in 2017, the latest entry to the acclaimed series has not received many updates. Earlier this month, Hideki Kamiya, the game’s director attempted to assuage fan curiosity by stating that “as much as everyone is clamoring to see it, we are really, really waiting to release it too... We want everyone to cheer us on as we run to the final stretch," suggesting the game is close to completion.

For those holding their breath for an in-depth look at BOTW2 or any of the other aforementioned titles that are supposed to come out next Spring, maybe take a deep breath. Today’s Nintendo Direct is supposed to focus on the winter slate of games for the console, so get the popcorn ready.