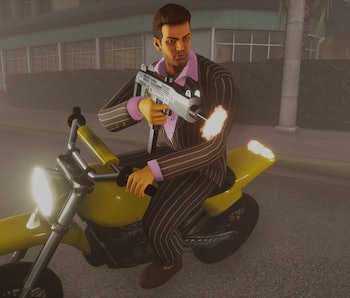 The rollout of Grand Theft Auto: The Trilogy has been a disaster so far — the franchise’s subreddit went offline to protest (it is now back), performance issues are rampant, and the new styling is painfully sterile. Just recently the PC version of the game was taken offline after hackers found code for the now-infamous “Hot Coffee” feature. And now, perhaps in an effort to add some levity around the game’s release, a big head mode has been discovered.

“Big head mode” is exactly as the title implies: the noggins of player characters and NPCs alike swell to comical sizes. To access this feature, users can input the Konami code (Up, Up, Down, Down, Left, Right, Left, Right, B, A) as pointed out by Eurogamer. Contra, a shooter that was released in the ‘80s, popularized the code and it is easier to commit to memory than one might think.

Right now you can implement big head mode in all versions of the game, unless of course you are playing on PC. While big head mode is goofy, the aforementioned “Hot Coffee” easter egg leans more in the risqué direction. During the release of Grand Theft Auto: San Andreas, the feature was controversial for containing depictions of sex — in reality, it was a primitive mini-game that included fully-clothed models.

Botched releases— In the past year and a half we’ve seen some game rollouts that have been highly unfavorable. Cyberpunk: 2077 had to be pulled just a week after its release following a bevy of player complaints, eFootball 2022 (an extension of the PES franchise) quickly became the worst-rated video game of all time on Steam, and now GTA: The Trilogy is running into its own issues. Maybe developers feel compelled to release projects in order to appease fans even if the product isn’t fully baked.

Aside from the negative reception to The Trilogy, fans of the series are also upset that Rockstar pulled the original games from digital storefronts, thereby offering no alternatives for the classic titles. Until some of the game’s issues can be remedied we guess big head mode can at least offer some comic relief. Here’s hoping GTA VI will eventually materialize and we can put all of this behind us.