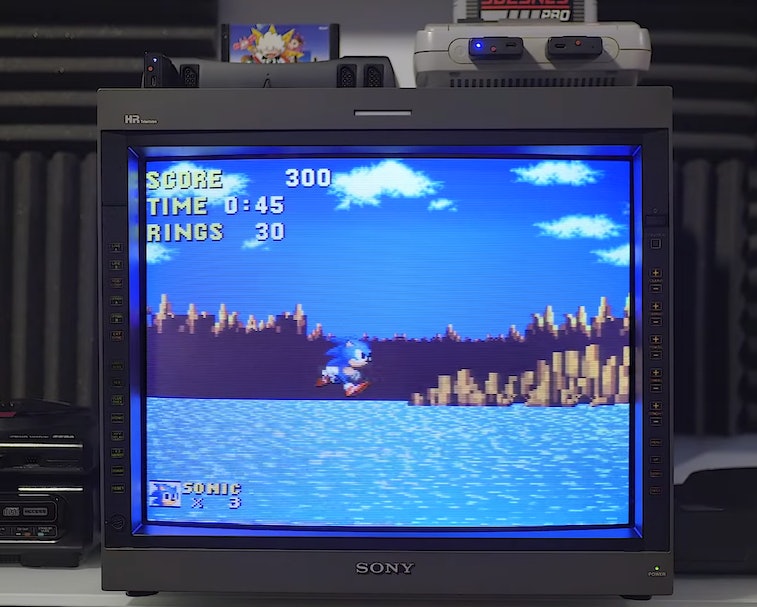 TiagoSC, known for their unofficial port of Mega Man X to the Sega Genesis, has ported Sonic the Hedgehog to the Super Nintendo Entertainment System. The tech demo was posted in the NesDev forums, where it was explained that this mod uses original code from Sonic Team but with the necessary modifications to get it running on Nintendo’s hardware.

Blast processing — The demo itself consists of Green Hill Zone Act 3 (sans boss). Although the blue blur has seen some minor changes, this marks the only time that a Sonic mod for SNES has nailed his speed and physics — the defining elements of Sonic gameplay. TiagoSC has also tweaked the game to take advantage of the SNES's larger color palette, which gives Sonic a more vibrant shade of blue than we originally saw him don.

Spikes — Many of the other adaptations to the game were necessary because of the lower resolution pumped out by the SNES vs. the Genesis, keeping the user from seeing the full original play area. Also, because of the SNES’s hardware design, the sprites are significantly smaller which requires more of them which in turn maxes out the sprite limit faster and slams the console’s CPU. Regardless, the game loads the tiles and sprites just as quickly as it always has, complete with parallax scrolling. That’s insane!

Special stage — The demo is quite buggy, and its audio leaves a lot to be desired, but nothing should understate how remarkable it is to see the game running at all. If a full port of the game were to come to fruition, it would likely require an additional chip, similar to the SuperFX used in F-Zero, in order to function like Sega’s original. TiagoSC is currently developing a game engine for a similarly fast-moving original experience on the SNES.

If you’re interested, we recommend checking out Digital Foundry’s deep dive on the demo below: