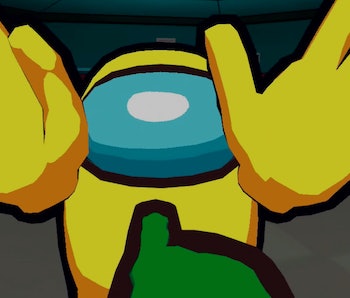 While the company is focused on making its “metaverse” dream happen, gaming is still the backbone of VR, and seems like there are some excellent titles on the way over the course of the next year.

New and old — Along with a new “Electronic Mixtape” for Beat Saber, sequels to stealth-action game Espire 1 and The Walking Dead: Saints and Sinners, and an adaptation of the popular Cities city-building and management series, Meta’s showcase had a bunch of other new releases worth highlighting.

One of the most high-profile recent additions to the Quest 2’s library, Resident Evil 4 ended up being a great fit for virtual reality when it was released in 2021. Now Armature Studios is completing the experience with the game’s iconic “The Mercenaries” arcade mini-game, after announcing the update last year.

The Mercenaries Update is free and available now.

StatusPRO’s official NFL VR game was announced earlier this year, and already seems to be an interesting alternative to years of Madden games. In NFL Pro Era you play as a quarterback, choosing plays and throwing passes all in VR.

NFL Pro Era will be available Fall 2022 on Quest 2 and PSVR.

Moss: Book II continues the adventures of Quill, placing players once again in a god’s-eye view of the brave mouse as she completes Legend of Zelda-esque dungeons. A cute, adventurous mouse, how could you say no?

Moss: Book II will be available Summer 2022 on Quest 2 and PSVR.

Among Us VR translates the popular social deception game to first-person, and at least based on the trailer, seems to be a perfect fit for virtual reality. There’s just something very satisfying about accusingly pointing at someone in VR.

Among Us VR will be available Holiday 2022 on Quest and SteamVR headsets. A PSVR 2 version of the game will launch when that headset is available.

Picking up from the cliffhanger ending of Red Matter, Vertical Robot’s Red Matter 2 features even more puzzle-platforming in space, along with new hacking and combat sections.

More information on Red Matter 2 will be shared later this year.

A sort of action-adventure dungeon crawler where you play as a wizard slinging spells, RUINSMAGUS seems to make a lot sense for the motion controls of the Quest 2.

RUINSMAGUS will be available “later this year” on Quest 2.

Bonelab has everything: skeletons, dank tunnels, physics puzzles, and combat that look straight out of Half-Life 2, and apparently some kind of mystery that ties it all together. I’m not sure what developer Stress Level Zero is making, but it seems fascinating.

Bonelab will be available at some point in 2022 on the Quest 2 and PC VR headsets.

Meta’s final surprise of the show was the announcement of Ghostbusters VR, a multiplayer ghost hunting game inspired by the film series and set in San Francisco. Given Sony’s ownership of the Ghostbusters franchise, it seems likely this game will come to PSVR 2 as well.

More information will be shared about Ghostbusters VR later this year.