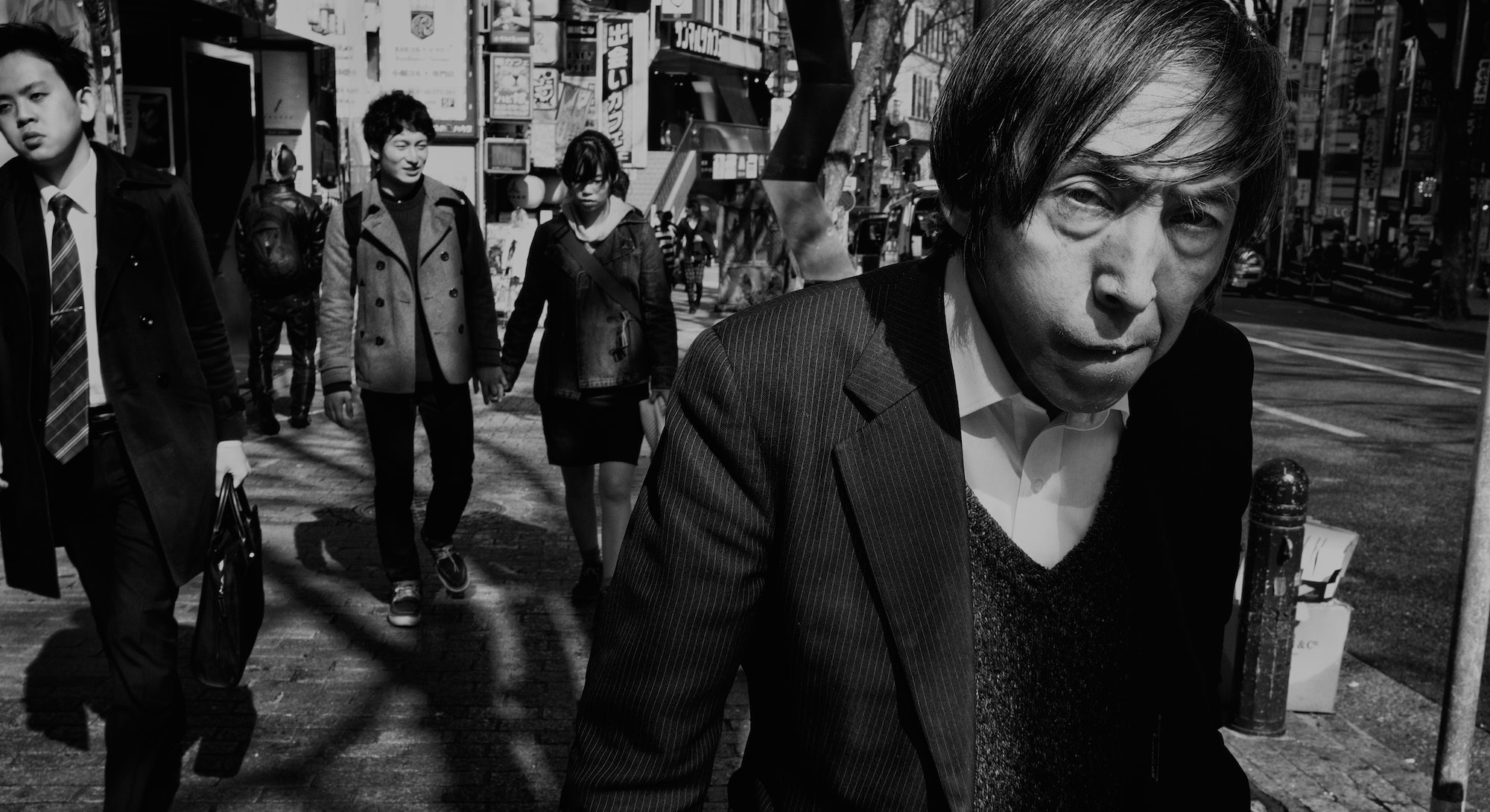 Of all the photos I've taken, one of my favorite is of a young woman leaning on a cardboard box she’s placed on a stone barricade. She’s standing outside of an office building in downtown Chicago, where I live. Three Mylar balloons float behind her, depicting a dragon, a dinosaur, and a unicorn. The woman is looking right into my lens, her gaze both wary and inquisitive. I am a street photographer — someone whose work focuses on documenting interesting, candid moments and interactions out in the world.

I hope that by looking at this photo, you'll feel a sense of connection to the woman, and an increased interest in observing the small joys of life we so often ignore. After I snapped the picture, I complimented the woman’s Mylar balloons as a sort of explanation for taking the photo, and she told me why she had them. I never attempt to hide what I'm doing, and have had many pleasant interactions with those I've photographed.

Not every interaction is so rosy. I’ve had plenty of potential subjects push back, asking me to not take their photo. I always oblige. It’s important to me to try not to make anyone I’m photographing feel unnecessarily uncomfortable. But not all street photographers have the same boundaries. Take Japan’s Tatsuo Suzuki, a photographer known for his tight, tense images of people in public. Earlier this month, Suzuki, 55, found himself embroiled in controversy over his techniques after the Tokyo-based Fujifilm released a promotional video showing his photographic process.

Looking through Suzuki's work, you'll see a lot of striking high-contrast black-and white images of Japanese pedestrians, very close to the camera, sometimes looking directly into the lens, seemingly returning the gaze of the viewer. "I want to see more emotion, and passion,” Suzuki has said. “And when the subject and I are facing each other, the emotions of the subject come out."

While it's clear from his photos that Suzuki gets close to his subjects, many people, both inside and outside of the photographic community, were shocked by Suzuki's artistic process. The controversial video — timed to coincide with the early-February release of Fujifilm’s street-photography-friendly X100V digital camera — captures Suzuki darting through crowds while taking photographs before quickly slipping away. He is often seen walking fast on a collision path with his subjects, or crossing in front of them at the last minute. He positions himself in front of pedestrians, stepping from side-to-side if they attempt to evade him.

The video’s removal hasn't stopped the backlash, however, and Suzuki has deleted his Twitter account, presumably to stem the flow of vitriol, which included attacks on his appearance and accusations that he’s a creep and a pervert. His Instagram account, once updated daily, is now dormant. His fate as part of the Fujifilm-sponsored X-Photographer program also remains in question. Fujifilm has remained mum about the controversy. (Input reached out to Fujifilm North America for comment but had not received a response as of press time.)

Even as a street photographer myself, I admit I found Suzuki’s style jarring. I was familiar with his work through his popular Instagram page, but hadn't put a lot of thought into how he went about getting those shots. For street photographers, it’s important to be aware of the power dynamic between a photographer and subject, and to try and minimize discomfort and exploitation whenever possible. Some photographers, like New Yorker Bruce Gilden, lean into that discomfort, attempting to provoke a response. While Suzuki does seek out interactions with his subjects, he isn’t nearly as aggressive as Gilden, who’s known for using flash and yelling at pedestrians.

Tokyo-based street photographer Lukasz Palka is not a fan of in-your-face tactics. "I feel it’s our duty to be nice to people on the street,” he says. “In some ways, we are ‘guests’ in each subject’s world. We should be gracious to be there instead of entitled." But Palka also suggests a more generous interpretation of Suzuki's process than I had initially considered.

"It’s not for me,” he says. “But I also don’t think it’s so bad. Sure, it ruffles some feathers, but I’m sure all those people will get over it just fine. And the results are photos that I generally like to look at. I think the way Tatsuo Suzuki [makes photographs] is an expression of his values and view of the world. As long as he is doing it from a place of honest curiosity and interest in the people and the city, then the slight discomfort some people might feel from his work is a small price to pay."

“The slight discomfort some people might feel from his work is a small price to pay.”

Lintaro, who has photographed with Suzuki before, also voices his support for the embattled shooter. “Tatsuo Suzuki is one of very few photographers I know who is working fully for their art without compromises,” Lintaro says. “His approach is an accumulation of years of working on the street, and he doesn’t hold back. I can respect that from the point of view of another street photographer.”

Many of the negative responses Fujifilm itself has faced come from Suzuki’s fellow street photographers. "Japanese companies are risk-averse," Palka says. "They don't want to be associated with a fringe figure. I find it very funny that they only now realized how he works."

Ulysses Aoki, a Tokyo-based street photographer, questions the editing of the video. "I know him personally,” Aoki says of Suzuki, “and that only covers a portion of how he shoots. You can watch other footage of him on the street with a smile on his face, interacting with the people he's shooting." The controversy, he adds, has “made me and many other candid photographers rethink the value of candid photography, and our relationship with wider society, including companies."

Lintaro also thinks that Suzuki’s process isn’t as intrusive as the video makes it appear. “I can understand that it may look very aggressive and rude seeing him approaching his subjects, but he is still very considerate and apologizes when the discomfort of his subjects is greater than intended,” he says. “In the end, he is very aware of people's perception of him, and he does understand the consequences.”

Still, Palka points out, the whole process is hard for Suzuki to communicate in the moment: "What I do think is missing — though I'm not sure how he would implement it — is educating his subjects about what he’s doing.”

At its best, street photography as a genre has the power to transcend cultural and class boundaries, create understanding, and document an environment, as Robert Frank and Henri Cartier-Bresson's work does. Street photographers need to work hard to make photos that create empathy, rather than alienate others. Love Suzuki’s work or hate it, it’s clear we all have work to do.