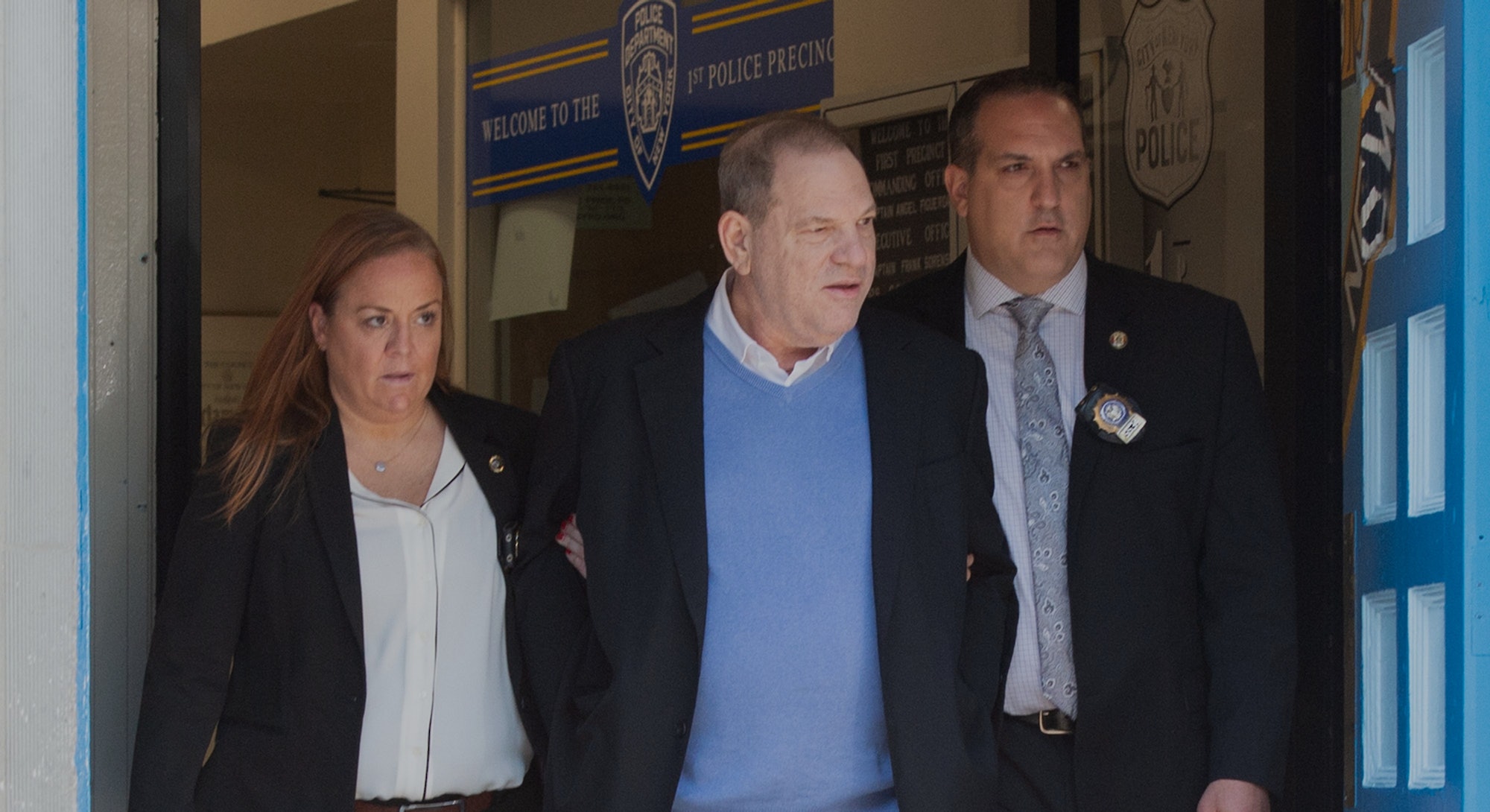 Early on in her nearly 15-year career, the actor Emily Meade was offered a role featuring full-frontal nudity. It was something that she was okay with doing, but not without knowing more. “They weren’t willing to have a creative conversation,” she says now, “so I had no choice but to say no.”

Sexualizing and exploiting women is intrinsic to Hollywood’s history. “There was an old saying that when producers would call you to the office, you’d bring your knee pads,” says actor Michelle Hurd, who currently stars in the CBS All Access series Star Trek: Picard and is one of the many women who came forward with allegations against Bill Cosby.

The case of producer Harvey Weinstein, currently serving a 23-year prison sentence for sex crimes, is the most high-profile recent example of industry abuses. But for every Weinstein, there are countless lesser-known or unreported perpetrators. Abuses can range from the infamous “casting couch” to inappropriate sex jokes told during vulnerable scenes.

Meade and her fellow actress friends have come to realize the ramifications of creating boundaries in an industry infamous for blurring them. “We’ve collectively missed out on parts because we didn’t want to say yes without detail or nuance,” she says.

Things might have gone differently had Meade been offered that role today. First off, intimacy coordinators — choreographers of sorts who are responsible for communicating their actors’ needs to the director, producer, and fellow actors whenever nudity is present — are more common on sets these days, in part because of Meade herself. In a move that gained attention across the industry, she successfully advocated for an intimacy coordinator for the entire cast of The Deuce, the gritty series about the 1970s and ’80s sex trade that ran on HBO from 2017 to 2019.

In late April, SAG-AFTRA, the television and film actors’ union, built on this trend, announcing the first industry-wide accreditation for intimacy coordinator training programs and registry. “We have to build the intimacy coordinator universe,” SAG-AFTRA president and former Beverly Hills, 90210 star Gabrielle Carteris tells Input. “With over 500 productions at once, there’s not enough of them.” At the same time, the union launched Safe Place — a platform, available as a mobile app, for directly reporting sexual harassment.

Like intimacy coordinators, the app is another line of defense in protecting actors in vulnerable storyline moments. As a spokesperson for the app and a coordinator whose work spans Euphoria to The Affair, Amanda Blumenthal says she immediately integrated the app as a resource for trainees in her Intimacy Professionals Association. “We’ve added the app as a resource, because if people don’t know about it, they won’t use it,” Blumenthal says. (Given the recency of the launch, the team behind the app wasn’t ready to share how many individuals have downloaded Safe Place or reported an incident.)

The idea for the app emerged from an early meeting between SAG-AFTRA, which has over 160,000 members worldwide, and the Hollywood Commission, the entity established as a response to the Weinstein scandal and tasked with working to end industry-wide harassment. Previously, the official method to report allegations was by calling in to a phone hotline, which wasn’t a particularly nuanced way of going about things. Safe Place offers tiered methods of reporting: members can choose to lead with their information or remain anonymous; they can file a report but reject actual recourse (or move forward); and they can even use the app as a journal and resource tool without submitting anything at all.

David White, SAG-AFTRA’s national executive director, says that the app gives members “a single house where they can understand what happened to them and locate themselves in their experience.” In essence, the app seeks to preserve the real-time observations of a victim, lessening the likelihood of claims of faulty recollections. “While we cannot eliminate all harm from occurring,” says Alicia Rodis, HBO’s intimacy coordinator and another Safe Place spokesperson, “having a discreet accessible pathway to report or even just record harassment keeps our workplace as safe as possible.”

Of course, opening your sexual-harassment reporting app requires more emotional support than calling an Uber. So the app presents members with reminders throughout the process to utilize resources provided by Safe Place, including referrals for social services and legal assistance. SAG-AFTRA now has access to more data that informs the union’s understanding of where sexual misconduct is physically occurring.

The tech could have made a difference for Meade early on, she says. “If the app had existed then, not only would people act differently because they know they could get in trouble, but I would have felt safer to pursue a sexual scene knowing there were more protections in place,” she explains. “Mentally knowing I would have had the option to report and that it was invited and accepted to do so without punishment would have had such a cumulative effect on my career.”

In order to begin building the app, the team conducted an extensive empathy study with more than 50 individuals, either abuse and harassment survivors themselves or people who are familiar with trauma. “We were able to ask these young members and established actors, ‘Okay, what would help you?’” says Carteris. “And they told us. They wanted to write [the incident] down, identify what they were actually feeling, see what following through via legal recourse might look like.”

This part of the app — one that emphasizes victims taking control over the situation and shaping how they report — wins high marks from intimacy coordinators and acting coaches. “The aspect of this app that I respond to most is the element where you can explore your experience and record it but not necessarily report it,” says Miranda Harcourt, who represents a number of high-profile actors around the world and is specifically trained in drama therapy, “particularly given that actors are in the thrall of their performance and their temporary relationships on set.”

Harcourt believes the app is a healthy way for actors to seek their own form of justice. Think back to the case of star Geoffrey Rush, who was accused by actor Eryn Norvill of sexual misconduct during a production of King Lear by the Sydney Theatre Company in 2015. Norvill had confidentially filed a sexual harassment complaint against Rush with the theater, a fact discovered by a tabloid newspaper, which then reported the allegations against her wishes. (Norvill ended up testifying in the defamation suit against the paper, which it lost.) Had the theater used an app like Safe Place — with its variety of reporting options and ability to hide the reporter’s identity — the situation would likely have played out differently.

“For decades, there’s been no accountability.”

As for the app’s functionality, Morgan Tennant, SAG-AFTRA’s executive director of customer experience, says that “the emphasis is on centralizing data and process.” The app allows the few with data access — the developers and SAG-AFTRA’s Equity & Inclusion team — to categorize instances by studio, region, etc., and to potentially take action. Knowing that a virtual paper trail can be established with the click of a button, says Tennant, will hopefully “wake up the perpetrator.”

Ultimately though, Tennant stresses, the app’s main goal is empowering its members. “It’s the biggest piece here — that actors have one more part of their toolkit to protect themselves,” she says. “Technological innovations like Safe Place,” White says, “allow our members to focus on what they came to focus on” — i.e., performing.

“We’re creating art, and we want art to be this beautiful thing, we want it to affect people,” says actor Hurd. “When you have nude scenes that are not taken care of, it takes the audience out of [the story] — you see Michelle,” Hurd adds. “When you have something supported, it’s only beneficial to productions.”

Hurd says that both intimacy coordinators and Safe Place feel like genuine safeguards on set. “For decades, there’s been no accountability,” she says. “Safe Place gives everyone choices and empowers us to create consequence.”

In my reporting, I found an enthusiastic response from other people in the industry — from actors to production staff — when they first heard about the app. So far though, the main issue seems to be that word of Safe Place hasn’t spread widely enough among union members. SAG-AFTRA is trying to change that.

“The union has orchestrated an all-out-blitz to meet members at their preferred method of communication,” SAG-AFTRA tells Input in a statement. “This includes: information on the website, member magazine, email communication, social media posts (Twitter, Facebook, and Instagram), television interviews, a YouTube video, and a notification on the SAG-AFTRA mobile app.”

If that blitz is successful, it will no doubt allow actors like Meade to focus more on their craft. Fighting sexual misconduct on set, Meade says, is “the thing I’m absolutely proudest of in my career.” However, she adds, “I would like to keep working and be known for other things. I don’t want this to be my one claim to fame.”