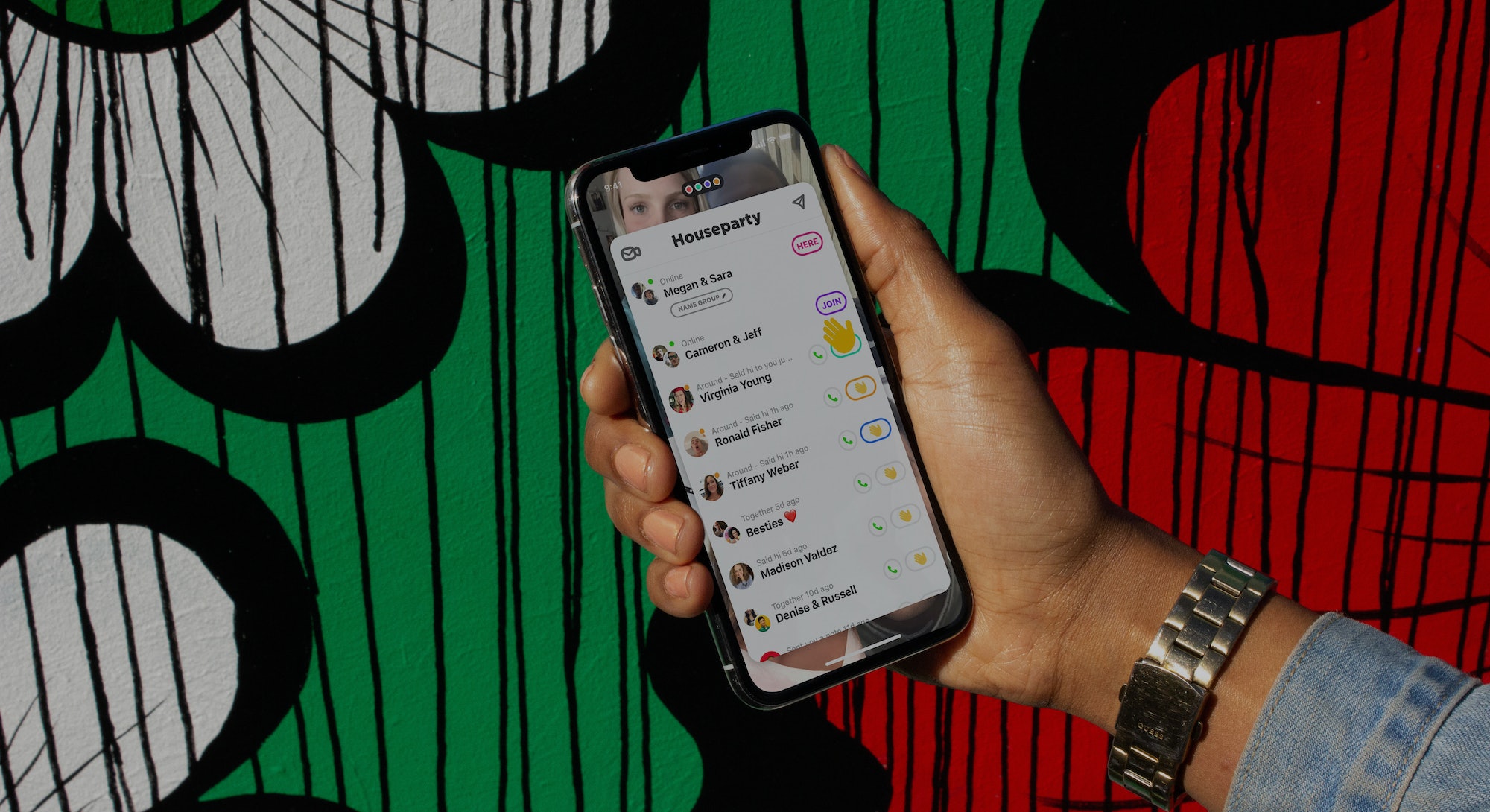 Elise Pfail knew that the world was in the grip of a pandemic. But that wasn’t going to keep her from her Friday night ritual.

This past weekend, the Brooklyn-based office manager transplanted the RuPaul’s Drag Race viewing party she usually hosts at the raucous Manhattan gay bar Boxers to Houseparty, a youthful-feeling group video chat app that has exploded in popularity in the time of self-isolation. “This was our first viewing apart so we wanted to make it special with a theme: black tie glam,” she says.

“We all did our makeup for the first time in what felt like weeks, my friend wore her faux fur and lounged with a fake cigarette holder, and I wore a dress I was supposed to wear to a Plaza wedding.” They kept their Houseparty room “unlocked,” so friends dropped in and out, like how they’d swing by your table at a crowded bar. “It's still just us together sipping drinks, aghast at how beautiful RuPaul looks,” Pfail says. “But now there's a screen between us”

Ali Jauregui, a 31-year-old fashion blogger from Phoenix, recently hosted a Sunday brunch on the app with her crew. “It helped us forget that we are quarantined to our homes,” she says. Jauregui’s hangout was made extra-festive by the app’s free in-built games, like Houseparty’s lightweight version of Heads Up! and a word association game called Chips and Guac. The free-flowing mimosas helped keep spirits high, too. “We all had a ball,” she says.

Houseparty was quietly launched in 2016 by Meerkat, a live video-streaming app that was all the rage the previous year. Millions downloaded Houseparty in the 12 months after its launch, charmed by the app’s colorful design and spontaneous features, like the ability to parachute into group chats of your friends without warning (users wanting privacy can “lock” their Houseparty room). At the peak of its popularity, Facebook briefly considered launching a clone app, but the buzz around Houseparty soon died down.

Despite being acquired by Fortnite’s Epic Games and featured on Ellen, the app looked set to join Gen Z upstarts like Ello and Peach in the digital junkyard. It took a global crisis for Houseparty to go stratospheric. In the two week period from March 10 to 24, the app vaulted from number 619 to number 10 in Apple’s all-categories app chat. At the time of writing, Houseparty is number one in Apple’s Social Networking tally, with higher ratings than similar offerings from its teleconferencing rivals.

“I use Zoom mostly for work and I'd like to keep it that way. It's just got that corporate smell that doesn't do it for me.”

For Houseparty’s devotees, the app’s focus on off-duty fun gives it an edge over broadly multi-purpose services like Zoom, Skype, and Google Hangouts. “I use Zoom mostly for work, and I'd like to keep it that way,” says Pfail. “It's just got that corporate smell that doesn't do it for me.”

Others looking to connect say that Houseparty is simply a more practical option. “It’s better than WhatsApp video calling because you get to talk to eight people instead of four,” says Manisha, a 27-year old in Amsterdam who uses Houseparty to chat with Dutch friends as well as cousins in New Delhi. “And it’s better than FaceTime because not all of my friends have an iPhone. In the first week, I only saw my Dutch friends play it, but now I see more and more people from India download it.”

Owen Lloyd is an events coordinator from London who started using Houseparty in mid-March after starting to work from home. “It could get very lonely without this minimal social interaction,” he says. “It’s a good way to keep entertained and try to keep smiling.”

Lloyd is a digital polyglot, and he does a lighthearted bit on Instagram where he recreates scenes from Broadway musicals with household objects (“Who doesn’t enjoy Wicked! with a broom?”). Yet Houseparty is just as appealing for people with a less flamboyant or exhibitionist approach to social media.

“None of us do TikTok or go live on Instagram, or anything like that,” says Sarah Bradbury, the founder of an Indianapolis-based nonprofit, speaking of her friendship group of "35-plus" millennials. Their four-way Houseparty call on Saturday night involved laser lights, music, and a Pictionary-like party game. “I thought we might be a little old for it,” she says. “But it turns out it’s fun.”

Houseparty’s target demo skews younger: its app icon depicts an ethnically neutral yellow, waving hand, and a welcome screen is populated with rotating trivia factoids and groan-inducing quips. Like all video chat apps, it reduces your face to the size of a postage stamp, but unlike with more buttoned-up video apps you don’t feel shrunk. Rather, Houseparty encourages you to be extra.

“Houseparty almost feels like being back in a college dorm, where everyone just leaves their doors open all the time.”

On a self-isolated Saturday this March, Jessie Char spent over nine hours on the app, flitting between groups and catching up with friends who dropped in to existing chats. “None of us have to initiate anything,” says Char, a conference producer from San Francisco, speaking of her friends who use Houseparty. “We probably see each other five times more often because there are no decisions involved. Houseparty almost feels like being back in a college dorm, where everyone just leaves their doors open all the time.”

Some users I spoke to reported connectivity issues on Houseparty, particularly in the busy evening periods. But their enthusiasm for the app’s ability to bring levity to weird times felt like welcome relief from doomsday narratives about the best minds of a generation destroyed by digital apparatus.

At its best, Houseparty can feel like a flash of optimism, a fleeting antidote to the daily chest-tightening sense that the world is collapsing around you like some smote Roman temple. People are already using it for sex, too, like groups of gay guys replacing IRL hookups with eight-way jackoff sessions. (Safety first!)

“What we're starting to see from our data collection is a change in people's attitudes towards technology,” says Jeff Hancock, a Stanford professor specializing in the psychology of social media. “Until recently people really felt that these technologies were problematic, harmful, addictive. But people are recognizing that they are useful for these current times.”

Our current moment is forcing other kinds of recalibration, too. As many of us start to work from home for who knows how long, domestic environments are shifting into multi-functional hybrid spaces to fulfill the needs of your day job, as well as socializing, exercise, and hobbies. In an effort to keep our lives from turning into catatonic mush, it feels necessary to build some kind of scaffolding between work and leisure time. Logging into Houseparty is an implicit signal that you are clocked-out.

“There's lots of evidence that with a mix of modes of socializing — some face-to-face, some on the phone, some written — relationships can be really well-maintained, and even grow,” says Hancock. “You want a rich and varied diet [of communication]. The more options we have for different kinds of socializing, the better.”

Pfail, meanwhile, is working to plan her next virtual Drag Race viewings, and along with her crew is currently raiding her closets for the next party’s kaleidoscopic theme: A Passion for Clashing. “Quarantine has taken its toll on me,” she says. “My mental health has not swung around this much in years.”

But her Houseparty meet-ups offer a bright spot. “They can be the highlight of my week.”