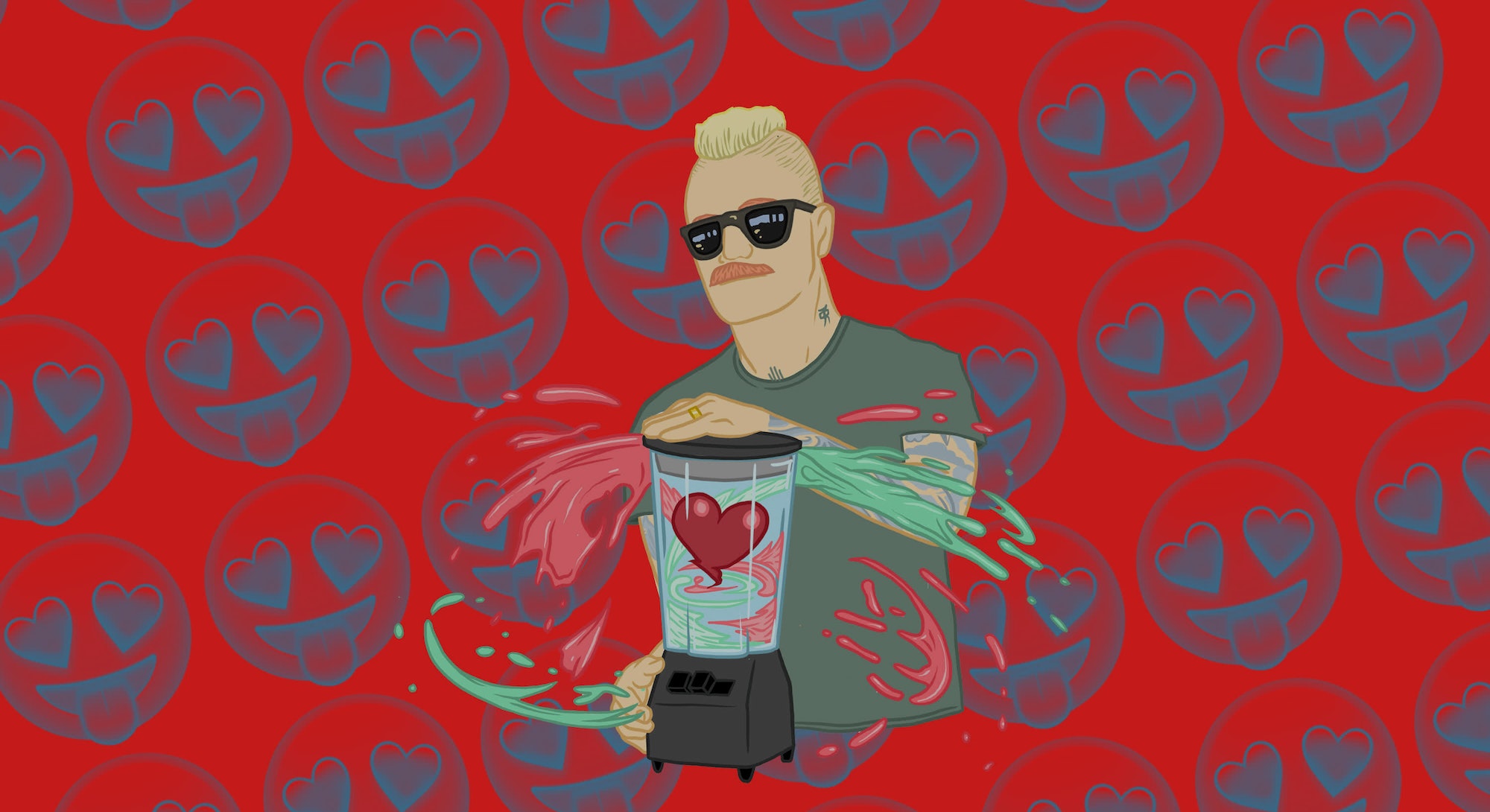 This week, we discuss fantasy, desire, and slow-motion infidelity, plus the pros and cons of boring desk jobs. I also manage to devote a few paragraphs to overrated writer and CEO apologist Malcolm Gladwell. Let’s get into it!

I’ve been married for about five years. I love my wife, and we’ve built so much together. I’ve grown as a person with her so much.

About seven months ago, I was at a work training event. I met this girl who I’ve fallen for since. As of now, the girl and I are friends. We haven’t hung out yet, but we text fairly often.

I’ve had back-and-forth feelings on where this girl is at as far as our friendship goes. I get the idea she’s not looking at it as more than that, but I am not sure.

My quandary is that I’m crazy about this girl. I get nervous to text with her and get butterflies when she responds. I haven’t spent a single day since we met not thinking about her in some way.

I do love my wife, and she and I have talked about possibly opening up our marriage to explore some of these feelings I have. However, I can tell it’s hard on her. And it’s all left me really conflicted. I could never imagine ruining things with my wife, but this other girl checks so many boxes for me.

I’m enamored of this other girl in so many ways and just at a total loss as to what to do or how to get over this situation. Please help me!

There are a lot of questions that I have about your letter, but you haven’t responded to follow-up emails for clarification, so I’m going to riff a bit and rely on my finely calibrated male intuition. There are a few routes I could take here given the ambiguities of your letter but sometimes the job of the advice columnist is to pick a lane, trust your gut, and be as authoritative as you can.

Could I look at the way you expressed these sentiments more charitably? Sure, but I think doing so would be a disservice because my aforementioned intuition is telling me that the problem here is you.

Fantasy is potent. Those of us who are privileged enough to enjoy a modicum of financial and emotional security will inevitably experience the luxury of an intrusive thought that sounds a little something like this: “Is this really all there is?” The answer is yes, sort of. Self-centered desire can be a sly trick of the mind to keep you living in an abstract future that doesn’t exist. When you realize this and can focus your attention on the very real present, it can sometimes open up a depth to your experience of living that you hadn’t noticed before.

I’m emphasizing fantasy and illusion here, because that’s what’s behind your yearning. That’s right, I’m saying you’re literally making this other woman up. You have never hung out with her one-on-one. You are falling for an idea of a person cobbled together largely through text messages. You are in love with a virtual representative of a person.

Now, you might say, “If I were happy in my marriage, I wouldn’t be thinking about this other person.” That, my friend, is bullsh*t.

Let me back up for a minute. I’m not trying to tell you you need to resign yourself to a marriage that you’re unhappy in. That’s just it — it doesn’t sound like you’re unhappy in it. Now, you might say, “If I were happy in my marriage, I wouldn’t be thinking about this other person.” That, my friend, is bullshit.

There’s always going to be temptation. Before you yell at me for using sexist biblical tropes, let me just clarify. Your partner will also find herself being attracted to other people, if she hasn’t already. You and your wife get to talk honestly and openly about the ways in which you’re comfortable (or not) negotiating said temptation. You mentioned that you floated the idea of an open marriage and that your wife didn’t seem that into it. That’s your answer. Your options now are recommitting yourself to your wife or, as my guest Laura Jane Grace put it in the last column, getting a kind divorce.

Now, if you’re thinking of cheating as a third option, let me tell you, that is never the answer. It’s a breach of trust that will not fail to make you feel like shit. Well, speaking for myself, it made me feel like shit. Some people seem to be able to rationalize and compartmentalize it away. For me, infidelity is a drug that is not even remotely worth the hangover. Have you cheated before? How did it make you feel? Are you in a hurry to experience that feeling again?

First, you need to recognize that your preoccupation with this other woman is largely a construct of your imagination (you don’t really know her, after all). Second — and this is going to sound corny AF — you should write a gratitude list pertaining to your marriage. What is it that makes you grateful to be with your wife? The goal of this exercise is to hopefully recalibrate your perspective — to shift you from desire to an appreciation for what is, for the person who not long ago you decided you wanted to spend the rest of your life with.

If these measures yield nothing and your desire persists and you are convinced that your coworker is the love of your life and that this is reciprocated by her — the last part seems to be a pretty big question mark — then be honest with your wife. Tell her that you understand if she doesn’t feel safe in a nontraditional marriage but that you feel stifled and dishonest being in one. Either talk and compromise or break up before you act on your impulses.

I lost two jobs this year, both in different brutal ways that felt like mental car crashes on top of everything else going on. Blessed with some healthy savings and encouragement from friends who had seen me go through it all, I forced myself to take some time to figure things out.

There’s a part of me that craves the stability, health insurance, and a “boring period” that would come with a big corporate job, even though my ADHD means I struggle to do work unless I find it interesting. It also feels like the thing I really love to do, which I had some success with a few years ago, has an increasingly low chance of actually being possible as a long-term career (writing features).

I don't know which path to take and where to focus my efforts.

I’d like to make the most of whatever potential and experience I already have, doing work that matters in a world that is increasingly bleak. But I’m also not that young anymore and need things like decent dental and prescription coverage.

Mostly, I'm trying to avoid making another decision I’ll look back on with regret. What should I do?

Hi At a Crossroads,

Writer Malcom Gladwell was rightfully main-charactered on Twitter recently for asserting that people should work at an office instead of from home.

Aside from the obvious reasons why this idea is terrible — extra hours spent commuting that turn into days, weeks, and months in the aggregate; less time with family and friends; etc. — he is basically saying that the worthwhile fundament of life, the thing people should forge their identities around, is their corporate job. This from a guy who rarely, if ever, has to darken the door of an office building. (Full disclosure: I have never worked a 9-to-5.)

To tie this into your question: Contrary to what Gladwell might think, it is the life you forge outside of your day job that is most important. There is nothing wrong with taking a corporate gig to make ends meet — as long as it isn’t with Lockheed Martin — but you should use it merely as a way to subsidize your creation of an avant-garde world, one that’s the antidote to the inexorable soul suck of work. Read great books, watch great movies, and write on the side (or on the clock, if possible). Carve out as much time as you can for family and friends.

I don’t believe in telling people to “follow your dreams” into poverty. Especially as late capitalism has a way of twisting those dreams into mere fodder for the terrible incentives of platform tech (clicks and views). If you aren’t desperate to keep a roof over your head with your art, it is easier not to compromise. Compromising tends to turn art into art’s opposite. Creativity shouldn’t be a means to an end but an end unto itself. Let the boring job be the means to that end.

This all may sound extremely obnoxious because I am fortunate enough to be able to play music for a living. But I apply these criteria to my life, too.

This all may sound extremely obnoxious because I am fortunate enough to be able to play music for a living. But I apply the above criteria to my life, too. A lot of musicians will have their main gig that pays the bills and then a side project through which they follow their creative whimsy, divorced from commercial expectations. That’s what we do with Eve 6. We just use the same moniker for the side project.

We play the old shit live to make money. Sure, it’s also fun — it’s alternative rock, after all — but it’s stuff we wrote as teenagers, and it’s not fulfilling in an artistic sense. We keep the lights on with the back catalog, and we gratify ourselves by making new music that has little chance of being profitable. As I like to say, the current incarnation of Eve 6 is us LARPing as a punk band in a vacuum. And we’re having a lot of fun doing it.

With that out of the way, I will say this: You have a financial cushion and writerly accomplishments to your name. Before you take a boring job, make sure you give yourself some more time to exhaust all your options for more fulfilling work.

And remember that even though a salary and benefits can offer temporary peace of mind, these fixtures are not always as sturdy as they seem. Especially in this moment, it seems as though corporations are in competition with each other to see how many people they can lay off.

All that said, I just want to return to the subject of Malcolm Gladwell, if I may. There’s a whole media ecosystem surrounding opinions that present to the uncritical eye as being bravely contrarian — truths that would find footholds if everyone could just be as courageous as the pundit class. You can apply a very simple rubric to test the actual rigor of these arguments by asking yourself who they benefit.

Do they serve management or workers? Nine out of 10 times —and I’m being conservative here — these takes range in substance from boss apologia to outright encouragement to embrace exploitation. Oh, and one last thing. Look at this funny tweet I did, even if I misspelled his name:

Read previous Heart in a Blender columns here. Have a question for the Eve 6 Guy, preferably one that’s tech- or internet-related (Grindr woes, Twitter drama, etc.)? Send it to Eve6guy@inputmag.com.